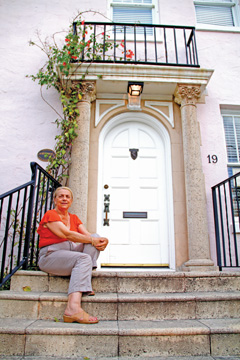 By Paula Detwiller
They called her “the holdout.”
The year was 1997, and the city of Delray Beach wanted to take Pat Healy-Golembe’s historic house by eminent domain to expand a parking garage near the beach. She said “no sale.”
The developer proposed an alternate plan: It would move her house to a nearby corner, thus freeing up the land for the parking garage expansion. She said no way.
“It wasn’t about money,” Healy-Golembe says. “We never even talked money. It was all about preserving the house and keeping it in its original location.”
That house is the Scott House, built in 1925 by E. H. Scott, a Delray pioneer, railroad manager and mayor. The location: 19 Andrews Ave., just off East Atlantic Avenue, about a block from the ocean. It was originally used as a residence for managers of the old Seacrest Hotel, a much-loved resort that occupied the corner of A1A and East Atlantic Avenue for more than 50 years.
Healy-Golembe bought the Scott House in 1985. By being a holdout when the city wanted her property, she earned the respect of her neighbors.
“I still have people thanking me,” she says. “I truly felt that a huge parking garage would have changed the streetscape of Andrews Avenue forever. The presence of my house breaks up the massing, and I think the locals appreciate that.”
Delray Beach’s Historic Preservation Board appreciates that, too — enough to honor Healy-Golembe with a Preserve Delray Award last month.
“Pat has maintained her Mediterranean Revival house in very good condition over the years,” said Historic Preservation Board chair Dan Sloan, “and we thought that was deserving of an award.” Sloan says Healy-Golembe’s determination to keep the house in its original spot in the face of mounting development pressure gave her extra points in his book.
“When you move a house, you’re ripping it out of its historical context,” Sloan says, “and Delray has done that so many times to build parking structures, some of which remain underutilized.”
Sloan laments the many old Delray homes that have been relocated to the city’s West Settlers Historic District to make way for new construction elsewhere.
“It’s nice that those homes weren’t demolished,” he says, “but now the West Settlers District is like an orphan home park.”
Truth to tell, the Scott House lost much of its historical context when the Seacrest Hotel was razed and replaced with a Holiday Inn (now the Marriott) in the early ’80s. In 1990, the Historic Preservation Board placed the Scott House on the local Register of Historic Places not only to “remember the previously existing ensemble of structures known as the Seacrest Hotel” but also to protect one of the last remaining Mediterranean Revival-style private buildings in the beach area built during the 1920s boom period.
It was the architecture that captured Healy-Golembe’s heart back in 1985. She fell in love with the stately two-story structure with its elaborate arched doorway flanked by two columns. The inside of the house had been remodeled — or “remuddled,” as Healy-Golembe puts it — during the 1960s with shag carpet and linoleum covering the original wood floors and “god-awful drapes.” An interior decorator by trade, she refinished the floors and redecorated the interior, creating a comfortable office and studio for her business.
As Delray Beach’s preservation movement got under way in the 1980s, Healy-Golembe was an active participant, serving on the city’s first Historic Preservation Board alongside people like Clemmer Mayhew, the city’s unofficial historian. She hosted parties at the Scott House to encourage local residents to support the formation of historic districts.
Today the Scott House is surrounded by hotel parking facilities on three sides — proof that you can’t completely stop redevelopment. But the woman they called “the holdout” doesn’t mind. She calls her façade “the rose between two thorns” and enjoys seeing people’s reactions when they discover it.
“There’s something of substance in an old house that you don’t get with the new ones,” she says. “And once they’re gone, you can
never bring them back.”

Delray Beach
Historic Preservation Awards
6th Annual Award Recognition Program
Awards are given to those property owners and their design teams who have significantly contributed to the preservation and rehabilitation of historic properties throughout the city, or provided compatible new development within a historic district. Recipients were recognized at the Delray Beach City Commission meeting on May 17.

Preserve Delray Award
This category was added in 2009 in response to the city’s designation as a Preserve America Community. It recognizes property owners who continually preserve their significant piece of Delray Beach history.
Residential
19 Andrews Ave., the Scott House, Individually Designated