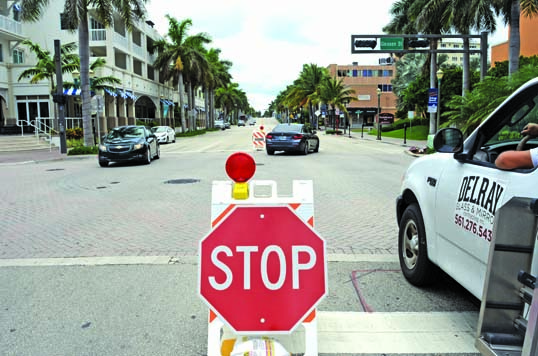 Motorists are urged to use caution after stoplights on East Atlantic Avenue near the ocean were removed in late May.
Only stop signs will guide traffic at the Gleason Street and Venetian Drive intersections for three months after it was discovered that the support arms for the stoplights were about to collapse.
Residents and business owners objected to the traffic danger for motorists and pedestrians during a May 6 City Commission meeting.
“Safety is obviously the big issue here. This could be catastrophic,” Beach Property Owners vice president Andy Katz told commissioners after state officials originally said the intersections would be without stoplights until late 2015.
“This will be a major traffic and safety nightmare,” Delray Beach Marriott general manager Rick Konsavage agreed at the meeting attended by oceanfront business owners.
“Our business relies on guests walking and driving the avenue,” Konsavage said. “Removing the stoplights would be unsafe and an unfair burden on residents and tourists.”
The Florida Department of Transportation responded the next morning by saying temporary stoplights on wires will go up in mid-August. FDOT now predicts that replacement support arms will be installed by June 2015.
State inspectors first discovered that the old support arms were rusting from the inside out in May 2013, but didn’t sound an alarm until more inspections this year.
“The state is trying to get them down as soon as possible because they fear they will fall down,” city environmental services director Randal Krejcarek told commissioners.
Mayor Cary Glickstein criticized FDOT for not seeking money for the replacement arms in this year’s operating budget, which begins in July.
“Why didn’t we know about this until the last minute?” Commissioner Shelly Petrolia asked.
With only stop signs for the next three months, Katz said, left turns from Gleason and Venetian onto westbound Atlantic will be the most dangerous for coastal residents. He urged flashing lights and an electronic billboard to alert motorists to the hazardous intersections.
FDOT district traffic operations engineer Mark Plass promised to work with city officials to improve safety at the two intersections.