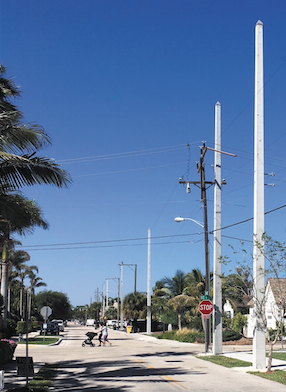 Florida Power & Light will move four recently installed concrete power poles on Southeast Seventh Avenue in the Marina Historic District.
FPL obtained the proper permits from the Florida Department of Transportation to install 12 poles in the area, according to Lauren Hills, utility spokeswoman. Upgrading the power grid began in March to supply the Atlantic Crossing project and future development in the area, she said.
But the utility did not apply for city permits for the work, City Manager Mark Lauzier said.
As a result, Lauzier stopped the work March 27 until the proper permits were pulled. Four poles were found to be on private property, he said. These will be moved into the city’s right of way.
Lauzier told the City Commission on March 29 that he is starting a new city policy requiring FPL or its contractor to pull a permit if the utility is doing work in the city. He also directed staff to come up with a way to note offsite power supply requirements to major developments going through the city’s review process.
Builder and property owner Michael Marco was pleased with the swift action.
“Although this situation seemingly caught some city officials by surprise, the quick response by the city manager, attorney and engineer under the direction of the outgoing Mayor Cary Glickstein was truly commendable,” Marco said via email on March 29.
“Many Marina Historic District residents were resigned to being overwhelmed and outmaneuvered by FPL, but in this case the city government worked hard on behalf of the citizens.”
Marco’s company bought a Southeast Seventh property in 2015. It subdivided the land into two lots and spent about three years going through the city’s approval process to renovate a home at 55 SE Seventh Ave.
“I’m happy to pay the price to keep the historic character,” he said. “But overnight, FPL just came in and destroyed the character of the neighborhood” by placing a 55-foot-high concrete pole between the lots on private property.
He and four other district property owners appealed to the City Commission on March 20.
“If we had received notice of the power poles or the poles were brought to the attention of the city’s Historic Preservation Board, we would have lobbied against them,” said Dan Sloan, former president of the district homeowners association. “We would have requested they be buried or rerouted from our district.”
Sloan was involved in last year’s negotiated settlement with the proposed Atlantic Crossing project.
At the time of the meetings, Edwards Companies didn’t know how FPL would service the Atlantic Crossing site, said Andrea Knibbs, the project publicist.
“To this date, they still haven’t shared details regarding the design or schedule,” said Don DeVere, Edwards’ vice president.
On March 30, Lauzier met with two FPL representatives to let them know of the policy change and “to improve communications with the city.”
The utility was contrite. “We apologize for the miscommunications to the city and its residents,” Hills said April 2 via email.
After the city permits are obtained, FPL will notify the affected property owners, Hills said. She predicted work would finish at the end of April.