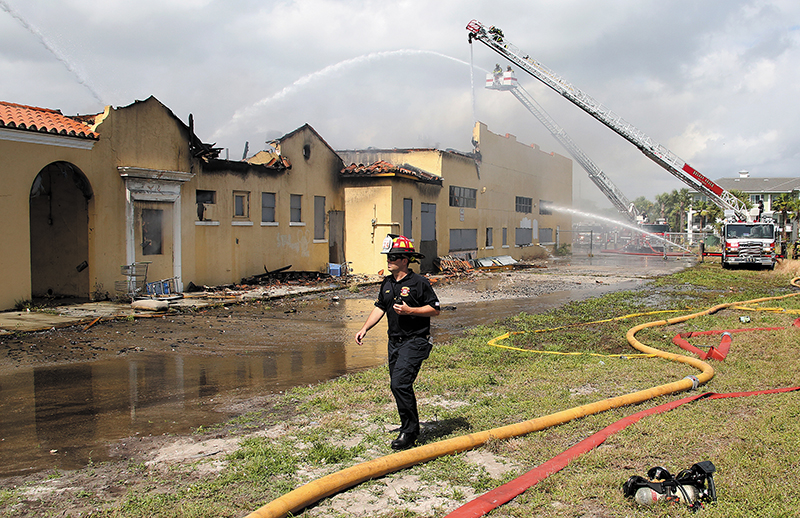 Thirty firefighter units responded to the blaze at the vacant station near Atlantic Avenue and I-95. The force of the blaze knocked over and burned one firefighter. Tim Stepien/The Coastal Star

The four Atlantic High School teens who confessed to starting the Feb. 25 fire at the Delray Beach historic train station are on house arrest, according to authorities.
The day before they had skipped school and bought a “kitchen lighter” at the Dollar Store, according to the Delray police arrest documents.
They made a cellphone video of the fire, which they shared among themselves in a group text message, according to the arrest documents.
The fire was discussed later that day at the city’s Community Redevelopment Agency meeting.
“The train station did not have sprinklers to prevent the fire from spreading,” said Bill Bathurst, a board member. “Our historic gems need to be protected.”
Board Chairwoman Shelly Petrolia said her heart hurts over the loss of the iconic building. Then she spoke as the mother of four boys and called for a “compassionate punishment for the teens. It can follow them forever and ruin the rest of their lives.”
On Feb. 25, a 911 caller alerted the Fire Department about 10:15 a.m. to heavy smoke coming from the vacant train station, just west of the interstate and north of Atlantic Avenue, said Dani Moschella, department spokeswoman.
At one point, the black smoke plumes were visible across the interstate and nearby parts of the city.
Thirty Delray Beach and Palm Beach County Fire Rescue units responded. The fire lasted several hours, Moschella said.
One Delray Beach firefighter was injured when he was thrown to the ground by the force of the fire. The firefighter suffered burns to his neck and ears. He was treated and released from a hospital, Moschella said.
While firefighters fought the blaze, city police detectives investigated a tip from the 911 caller who saw four boys running from the train station. The detectives obtained surveillance footage from a nearby business that showed the teens running toward Atlantic Avenue, Moschella said.
Delray Beach police were able to trace the teens to nearby Atlantic High School because one of them was wearing his ROTC uniform. The Atlantic High ROTC instructor identified three of the teens and the campus police officer identified the fourth.
“They confessed to starting the fire, which they said got out of hand,” said Ted White, spokesman for the Delray Beach Police Department.
Delray Beach police arrested the teens, between 14 and 17 years old, and drove them to the Juvenile Assessment Center. They had their first court appearance on Feb. 26 when the judge let them out on house arrest with conditions of no contact with each other and not to return to train station.
Their next court date is March 18, White said.
The county State Attorney will determine whether they are charged as adults.
In addition, the state fire marshal is investigating the fire, Moschella said.
A fire department official toured the site the day of the fire and determined the walls are structurally sound, said Roger Cope, a Delray Beach architect who was involved with restoring the train station.
“But the wooden structure supporting the roof was destroyed,” Cope said. The historic train station can be restored, he said.
The vacant station, built in 1927, is formally known as the Seaboard Air Line Railway Station. In 1986, the depot was added to National Register of Historic Places. Designed by architect Gustav Maass in the Mediterranean Revival style, the train station was last used by Amtrak, in 1995.
Delray Beach paid $1.58 million in 2005 for the historic train station on nearly one acre. At one time, commissioners discussed spending $325,000 to renovate it.
Lately, the city Public Works Department has stored lawn maintenance equipment and extra garbage containers at the vacant station.