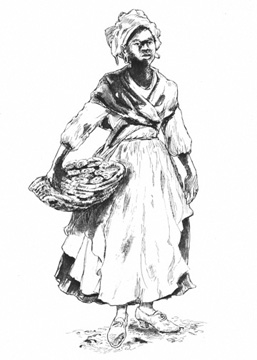 A woman from Fort Mose near St. Augustine.

An exhibit returning to Delray Beach’s Spady Cultural Heritage Museum after a three-year absence will help visitors understand that slavery in North America was more complex than popular memory might have it.

The exhibit, which opened in May and remains there through July 29, is focused on Fort Mose (pronounced Mo-SAY), a redoubt north of St. Augustine that in the mid-18th century was home to the first community of free black men in what was to become the United States.

“It ties directly to South Florida because many of the people from the Georgia, Carolina, Panhandle of Florida area migrated down to what we now call South Florida, particularly Delray Beach, during this time by way of Fort Mose,” Jones said.

Not that there were any major settlements in this part of Florida back then. But it served as a hiding place until the abolishment of slavery with the 13th Amendment in 1865.

Florida was a Spanish colony from Ponce de Leon’s arrival in 1513, and in the 1680s, Spanish King Charles II offered asylum to slaves who would agree to serve the Spanish against the English, and convert to Catholicism. Fort Mose was built in 1738 as a defense outpost to protect St. Augustine. It was attacked not long afterward, and rebuilt. Spain ceded it to Britain in 1763, and the colony departed for Cuba.

The 500-square-foot exhibit features informational panels and cutout representations of some of the people important to the story, and a case containing replicas of some of the items found at the site when it was excavated in 1986, such as musket balls and belt buckles.

“These things helped the historians piece together all kinds of information about the fort, including the types of uniforms that they wore to the types of food that they ate,” Jones said.

Most importantly, the Fort Mose story helps show visitors that the face of slavery was not the same in every part of the country, Jones said.

“The biggest thing it does is it highlights the different perspectives of the different nations who were enslaving people,” she said, adding that the Spanish approach allowed them to consider the slaves they protected as servants and freemen at the same time.

The Fort Mose exhibit comes from the Florida Museum of Natural History and is sponsored by the Delray Beach Community Redevelopment Agency.