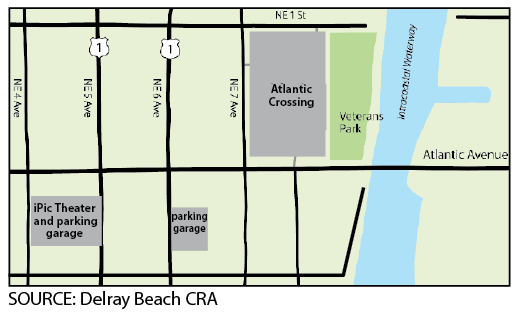 The Community Redevelopment Agency project for a luxury movie theater complex along East Atlantic Avenue in Delray Beach is progressing, while two other CRA projects are on hold. Before proceeding on a proposed parking garage, the city wants more public input.

Funding of $750,000 is set aside to complete the design of a multi-story parking garage on the city-owned Gladiola parking lot on the east side of Southeast Sixth Avenue, south of East Atlantic Avenue.
The CRA provided the funding for a study to consider a variety of concept plans for self-park and automated parking structures. The city commission consensus was to provide a self-park parking garage with commercial space on the first floor. Construction was to start this year and be complete in 2015.
CRA Director Diane Collona said the project is on hold after some residents voiced concern about the need and type of new parking.
In October, Safety as Floridians Expect presented its opposition to the garage to the City Commission, saying there is not proven need for another parking garage, and until the city spends more money on bicycle and pedestrian safety needs, it will oppose the project.
Colonna said the plans have not been finished; the $750,000 is still in the budget.

Council members are expected to do more research on what residents want.

East Atlantic median
Another project on hold is an improved median on East Atlantic Avenue. It’s on the CRA work list and is budgeted at $30,000 for a feasibility study and conceptual plan. Proposed is the installation of a landscaped median within Atlantic Avenue between A1A and Gleason Street. It would give pedestrians a midpoint to stop at while crossing and would force cars to slow down as they turn from A1A onto Atlantic Avenue.
Randal L. Krejcarek, Delray Beach director of environmental services, said the city commission voted earlier this year not to pay for a study for the median project, but the $30,000 remains in the CRA budget.
In another project east of the Intracoastal, Krejcarek said, the city has hired Kimley-Horn and Associates to modify the intersections of East Atlantic Avenue at Venetian, Gleason and A1A. The modifications will include adding pedestrian crosswalks at each intersection. The CRA is contributing to this project, he said.

iPic Theater
The luxury theater complex and office space that its developer projects will produce more than 400 jobs and bring more than 400,000 visitors a year to the downtown, is right on schedule, according to iPic Entertainment, the company building the movie/retail/office complex.
Jim Lee, vice president of marketing for Boca Raton-based iPic Entertainment, said the project is proceeding as planned with no major changes.
The company will present plans to the city in July, Lee said. The CRA had accepted unanimously a plan from iPic, over three other proposals.
The complex will include an eight-screen, 529-seat luxury movie theater; 42,869 square feet of Class A office space; 7,290 square feet of retail space; and a 279-space parking garage.
The Fourth and Fifth avenues site includes the old library building on Southeast Fourth Avenue, the Chamber of Commerce office building on Southeast Fifth Avenue, and the adjacent public parking lot.
iPic’s Delray Beach Holdings LLC offered $3.6 million for the 1.57-acre site, about a half-block south of Atlantic Avenue in the downtown core.
Once the plans are approved, iPic says, the construction should take about 20 months.