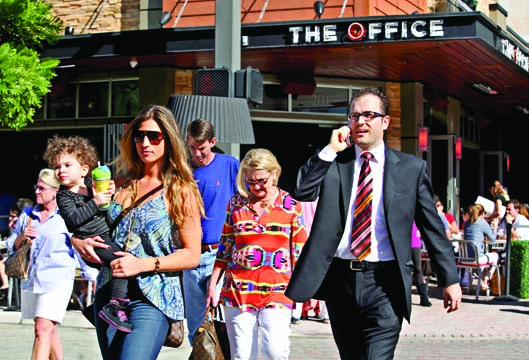 Delray Beach’s downtown is emerging from the recession as a place where young professionals can live, work and play.

The recovery is fueled by banks willing to lend money to build rental apartments and a downtown master plan that allows density bonuses to encourage development.

The controversial Atlantic Plaza II project was the first in the recent flurry of downtown development projects.

“The reputation of our downtown as a happening place is one of the keys to our recovery,” retiring City Manager David Harden said. “Our goal is to get a complete downtown that is sustainable.”

Ideally, urban residents won’t need vehicles if they can walk from their apartments to work, shop and play. That’s the vision of downtown development leaders.

But some coastal residents are skeptical whether that ideal can be achieved. They fear that density incentives to encourage more downtown apartments will simply lead to more traffic congestion and parking problems.

The master plan was drafted 14 years ago with high-density housing seen as the means to generate year-round customers for Atlantic Avenue shopkeepers.

“The goal is a balanced mix of retail and housing so businesses can survive and make a year-round go of it,” Harden said.

City planners point to Worthing Place as the best example of a new housing project that accomplishes the city’s vision for a future downtown.

“Density should not be the issue. It’s really about how well the buildings are designed,” said Paul Dorling, the city’s planning and zoning director.

Worthing Place was designed by Richard Heapes — the same urban architect who created Mizner Park in Boca Raton. City commissioners granted 92 units per acre, and construction began in 2008 as the recession began.

“Density wasn’t an issue,” Worthing Place developer Bill Morris recalled. “The city was just very excited to have someone come in and build.”

Delray Beach’s downtown remained stronger than others during the recession. Two new hotels, the Seagate and Hyatt Place, were built. Downtown property values remained stable, unlike in other cities.

“The character of our downtown has provided an opportunity that is larger than in most other downtowns,” senior city planner Scott Pape said. “When the economy turns around fully, we’re going to see Delray Beach further ahead than other communities.”

The appeal of Atlantic Avenue is like no other. Visitors from Boca Raton to West Palm Beach bypass the manufactured look of Mizner Park and CityPlace to dine, window shop and enjoy a traditional downtown where historic buildings such as the Colony Hotel and Old School Square have been preserved.

The appeal is such that young professionals want to live near the downtown.

“Renting has become the preferred option for people moving from one community to another,” Nolan said. “Banks have figured out there’s a demand, so building rental units can be financed.”

Delray’s downtown is particularly attractive to multifamily housing developers now because the city didn’t overbuild before the recession. “There’s a demand for Delray Beach and not a lot of overbuilt capacity,” Nolan said.

The recent demand appears greater than five years ago when Worthing Place received incentives to build. But the city continued to grant developers their requests for higher densities last month.

Atlantic Plaza II developers originally wanted 51 units per acre for their mixed-use project on East Atlantic Avenue near the bridge. City commissioners reduced the density to 40 units per acre when neighbors on both sides of the bridge objected.

Mixed-use projects are attractive to downtown development advocates because they include office space — the missing element if Delray’s downtown is truly to become a place where residents can live, work and play without automobiles.

“People love downtown Delray Beach and would love to work here, but we don’t have the office space available,” said Nolan, who says he frequently turns away law firms seeking to locate downtown.

“Class A office space is one of the biggest concerns,” agreed Gregg Weiss, the economic development chairman for the Greater Delray Beach Chamber of Commerce. “Our downtown has a magic vibe which makes people want to be here, but we’re losing business to Boca Raton.”

“We need to give vibrant young people a place to live and work,” McDuffie said. “This project brings us office space we’re looking for.”

But that and the 4,925 square feet at Uptown Delray aren’t enough space to meet the need, according to Nolan. More high-density apartments will be built without enough downtown jobs to employ residents within walking distance.

“We’re going to have larger, taller and more dense structures in the downtown as a norm,” said Bob Ganger, chairman of the Florida Coalition for Preservation.

“It seems as though the city has abandoned the density part of its land-use regulations,” he said.

Ganger and Katz want city commissioners to limit the density bonuses only to properties that would be difficult to develop without them. The two Related Group projects, for example, are near railroad tracks south of downtown.

“Incentives are no longer needed along Atlantic Avenue itself because everyone wants to be there,” Katz said.

They warn that a downtown without stricter density controls will no longer be as attractive because of traffic and parking problems.

“The city needs to step back and rethink the downtown growth plan to ask if we’re killing the golden goose,” Ganger said.