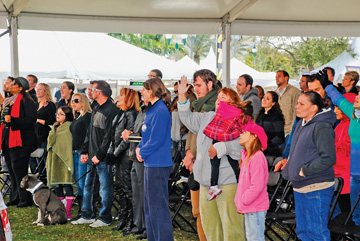 Members of the congregation gather on a chilly Sunday for service at Old School Square.

Delray Beach’s fastest-growing new church began with a chance meeting in a downtown coffee shop.
The Avenue Church wasn’t intended. It wasn’t planned.
Casey Cleveland, a pastor at Spanish River Presbyterian in Boca Raton, was working on his laptop when he overheard Saul Kane, a man with a shaved head and tattoos, talking at another table.
“He looked nothing like me,” Cleveland said of the man who opened the door to what originally began as a Christian mission to drug and alcohol addicts in recovery.
The Avenue Church has grown into much more since it opened in September 2010.
More than 350 attend Sunday worship, usually at the Delray Beach Community Center and sometimes at Old School Square.
The congregation now has families and young professionals in the 20-to-40 age group you see strolling Atlantic Avenue on a Friday or Saturday night. Many new members are single parents with children.
The new mission for the rapidly evolving congregation is to provide homes for children in crisis. Cleveland hopes to convert a downtown building into a temporary home for children waiting for foster care. Casey Cleveland is not your typical pastor. Photos by Kurtis Boggs/The Coastal Star

“We’re bringing the church to the city,” said Cleveland, who sees no need for the Avenue Church to have a permanent church building. “We’d rather take care of others than ourselves.”
Cleveland’s boss at Spanish River Presbyterian, executive pastor Ron Tobias, first thought Cleveland’s chance meeting with Kane three years ago would only lead to a coffee-house ministry for the recovery community.
“There was no spiritual community in Delray Beach focused on that need,” Tobias said. “We sensed a huge void there.”
Spanish River has spent $10 million to start 27 new congregations around the world. “But Delray was different,” Tobias said. “Instead of sending money, we sent people.”
Kane introduced Cleveland and two other Spanish River staffers, Allison Good and John O’Brien, to Delray’s recovery community.
“Casey and the others were seen as people who genuinely wanted to help,” said Kane, a recovering alcoholic who is now a leader in the community.
“The recovery industry is very profit-driven industry,” he explained. “This was the first organization to come along that didn’t want to make a million dollars.
“They made a promise and they stuck to it,” Kane said. “It’s been the most positive impact on our community since Delray became a recovery hub.”
Cleveland, Good and O’Brien were flooded with questions about relationships with other people and God when they began.
“The people were refreshed that I care more about their future than their past,” he said. “A lot were surprised [by] what real grace looked like. Before I knew it, this kind of exploded.”
Cleveland kept praying for guidance. “It was to become a church that ministered to all the demographics of Delray,” he decided after a year of ministering in coffee houses.
His original approach to recovering alcoholics and drug addicts would carry to a larger population.
“To build a redemptive relationship means to walk along someone’s side while sharing the hope that Jesus can transform them,” Cleveland said. “The challenge is to slow down and do life with them.”
The Avenue Church grew quickly to where now it is financially independent from the Boca Raton church and searching for other Delray Beach needs to respond to with compassion.
“God has called you to use you in incredible ways,” Cleveland implored his congregation in a recent sermon. “You’re no good to people around you if you are only concerned with yourself.”
The congregation now sees a need to help children in crisis. Church members are training to become adoptive or foster parents.
“Scripture talks about caring for the orphans,” Cleveland said. “It’s a tangible expression of the gospel message when we adopt or foster a child.”
Several church members, including Cleveland and his wife, Kathryn, are taking children into their homes as they await foster care.
Rather than spending money for a church building, Cleveland sees the need to acquire and convert an old warehouse on Southeast First Avenue for such children.
“God is a really great God, so I do expect great things from him,” Good said in reflecting on the Avenue Church’s short history. “But I have to stand back in awe over what’s happened here.”