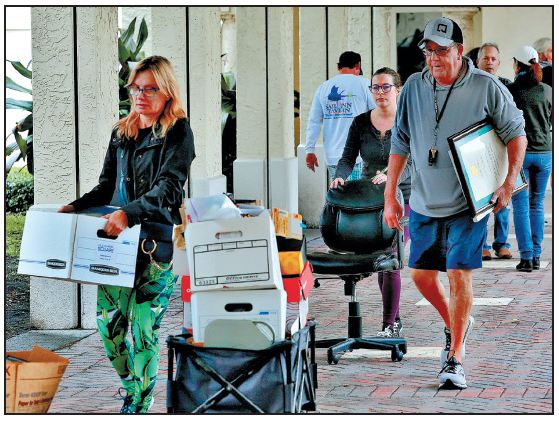 The city’s Community Redevelopment Agency has demanded that the former operators of the Old School Square campus produce financial records to prove they properly spent nearly $200,000 the CRA gave them or risk being forced to return the money.
If they fail to meet a March 10 deadline, the CRA will move to claw back the $187,500 it gave the Old School Square Center for the Arts Inc. The money represents the first-quarter payment of the 2020-2021 budget year.
“They keep saying ‘we gave you what you asked for, where is our money?’” Renee Jadusingh, CRA executive director, said at the Feb. 22 board meeting. The former operators were referring to the rest of the CRA money — $562,500 — that had been allocated the last budget year.
“If they didn’t spend it in Category A, they simply moved the money to Category B,” which violates the funding agreement, Jadusingh said. Changes of more than 10% to a budget line item must be approved by the CRA, she said.
She told the board members that the CRA staff has requested canceled checks to prove how its money was spent.
In an email response to questions from The Coastal Star, Carli Brinkman, the former operators’ spokeswoman, wrote that the CRA has “requested information that far exceeds the scope that is relevant to the City’s financial involvement, which accounted for only 20% to 25% of our operations.”
Still, she wrote, “We are working hard to provide the requested relevant information and feel confident we can respond in a timely fashion.
“We think it is important that Delray Beach residents are aware that the same CRA that is withholding these funds, making claims of non-compliance and making request after request for more information from us, is run primarily by the very City officials that just terminated our lease and are being sued by us. These individuals already have a vested interest in seeing us exhaust our funds and resources so that we are no longer able to operate in any capacity as an organization.”
Not the case, insisted CRA board member Juli Casale. Under her questioning, Jadusingh agreed it was the OSSCA leaders who were “not cooperative.”
Casale also requested the CRA staff contact the federal Small Business Administration to request the documents that OSSCA provided to secure two payouts under the Paycheck Protection Program.
The OSSCA received a PPP loan for $309,709 in April 2020 that was later forgiven and a $283,095 loan in March 2021 that was not forgiven.
Casale wanted the CRA staff to compare the documents to determine that the payroll expenses were not covered both by the CRA and the federal programs. That would be “double-dipping,” Casale said.
CRA board member Angie Gray said, “The CRA is getting blamed for what’s going on at OSS. ... Why are we giving them (more time) when the (mismanagement) has been going on for years?”
The CRA board voted 6-0 to approve sending the deadline notice. Board member Ryan Boylston was absent.
The OSS campus carries a deed restriction. It must remain an arts and cultural center. If it does not, the property reverts to the Palm Beach County School District. The campus has five entertainment venues: the Field House, the Crest Theatre, the Creative Arts School, the Cornell Art Museum and the Pavilion.
In August, frustrated that their repeated requests for financial records from OSS managers had gone unanswered, the City Commission voted 3-2 to terminate the OSS lease. Mayor Shelly Petrolia, Shirley Johnson and Casale voted to end the lease. The decision prompted an unsuccessful, but heated and sometimes mean-spirited, public relations and social media campaign to force them to reconsider.
The city lease with the OSSCA operators ended Feb. 9. The scene on the last day was chaotic as the former operators moved belongings and sold old wooden desks and display cases. Concerned residents called the city to complain.
Delray Beach police “performed a security detail during the transition,” Chief Javaro Sims wrote in an email sent Feb. 18 by Ted White, police spokesman.

The city's spokesperson said the city made a photographic inventory last fall of city-owned items in the OSS buildings, according to an email sent Feb. 24.