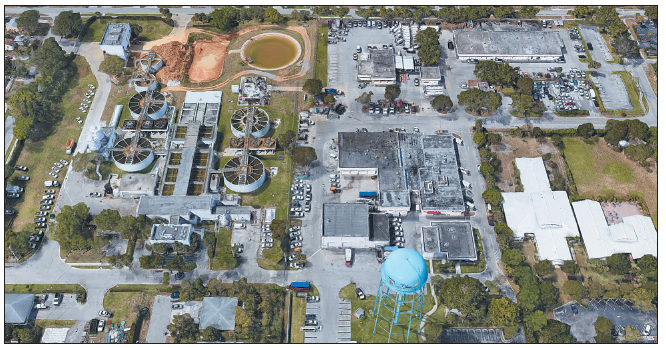 The Delray Beach water treatment plant, a few blocks south of downtown, has not received a major upgrade since the early 1990s. The city says it has improved cleaning and other maintenance at the aging plant, and is watching for trouble more closely than ever before. Google Maps image

Faced with persistent concerns from residents about drinking water quality, Delray Beach city commissioners are considering replacing the aging water plant built almost seven decades ago.
During a meeting last month, interim City Manager Jennifer Alvarez and Utilities Director Hassan Hadjimiry outlined the steps that the city will take as it prepares to replace or extensively improve its water treatment plant, built in 1952 when Delray had only 6,500 residents and Harry S. Truman was president.
With the green light from the commission, city staff members will begin assessing current and future needs and costs, a process that could mean it will be six years before a new plant is working — if commissioners continue to support that option.
“All of us on the commission are excited about moving forward,” Mayor Shelly Petrolia said. “We want to bring our water quality to the next level.”
During the presentation to the commission, Alvarez and Hadjimiry pointed out that it has been at least 25 years since the plant received a major upgrade, while also showing that most surrounding communities have already upgraded their water treatment facilities.
“We are definitely overdue,” Petrolia said. “People are wanting to have better water quality here and I think it’s time to take it to the next level.”
Others on the commission shared the mayor’s enthusiasm for moving forward with veteran water systems manager Hadjimiry leading the effort.
“I am sure our residents are most anxious to see this happen,” Vice Mayor Shirley Johnson said.
In presenting a case for a new plant, Alvarez said that several maintenance improvements have been made, but even so, much of the equipment in the plant is more than 50 years old and the technology and monitoring systems are outdated.
“We need a new plant in five to 10 years,” Alvarez said.

Type, cost to be determined
What type of plant the city will build and how much it will cost will depend on a number of variables — including the city’s ability to access enough raw water to meet demand. A reverse-osmosis plant, for example, would require more raw water than a plant with more commonly used treatment methods such as membrane filtration, filtered media or a combination of technologies.
Hadjimiry said the city will want to look at the best way to remove contaminants already prohibited by government agencies as well as those that may become more tightly regulated, include PFAs, synthetic chemicals linked to some health issues.
A study would still be needed to include population projections, what water usage demands would be put on a plant in the future and what size plant would meet the city’s needs. The city would also need to develop a timeline for the project.
“We need to determine what is the best type of plant to take us into the next decade,” Petrolia said.
The existing facility has a treatment capacity of about 26 million gallons per day and usage averaging about 14 million gallons per day.
The city’s current population of about 70,000 has added about 10,000 residents in the last 10 years, according to worldpopulationreview.com. Moving forward, Alvarez said, the city will continue with a rate study that could encourage conservation and bring usage down.
The staff will also review a Water Supply and Treatment Feasibility Study done by Kimley-Horn engineering firm in 2019 that recommended the city go to a reverse-osmosis system. That study estimated the cost of building a new plant would be between $132 million and $144 million, but Petrolia believes those numbers might be on the high side.
During their presentation, Hadjimiry and Alvarez displayed a chart that showed plants built by other South Florida communities from 1991 to 2006 with price tags ranging between $40 million and $80 million in estimated 2025 dollars.
The city will also look at funding sources, including potential grants, and will examine the feasibility of creating a public-private partnership as one funding option.
Moving forward with the project, Deputy Vice Mayor Adam Frankel said, is a high priority for Delray Beach.
“It’s one of those things that needs to be put on the top of the list,” he said.