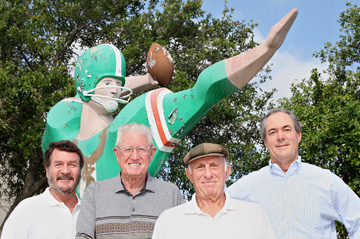 Oh, the stories they will tell.
There will, of course, be the requisite dinners, activities and revelry when close to 150 former athletes, coaches, cheerleaders and Hawkettes from Seacrest High School’s “glory days” in the 1950s, 1960s and early ’70s get together for their first-ever Seacrest High School Sports Reunion in early July.
But what most likely will be the cornerstone of the event will be the sharing of stories from those not-easily forgotten years when Seacrest High School — the predecessor of what is now Atlantic High School — was a sports powerhouse and much more than just a building with classrooms and a gym.
“We had a very special thing at Seacrest,” says former coach Norman Price, who, even today, is referred to simply as “Coach” by men and women who are now lawyers, dentists, accountants and retired or current police officers and firefighters. “It was a really tight-knit group.”
At a time when Delray Beach was still a small community, when everyone knew everyone and some of the teachers actually grew up with their students’ parents, Seacrest was a central gathering place.
“Back in the 1960s and 1970s, the school was the hub of the whole community,” says Carey Snyder, who along with Price is organizing the reunion. “It was a very special time and there are a lot of us who shared that very special athletic experience.”
Talk to some of the former players and you’re likely to hear stories about “character building” exercises, such as two-a-day football practices in the heat of August, or of coaches who could tug on a dislocated finger, tape it up and have you back in the game within minutes.
“There were a lot of us who suffered through those two-a-days,” says Jim Gardner, now living in Ocean Ridge, who played football at Seacrest before graduating in 1962. Gardner was also a standout in track and field, setting the then-school record in the discus and the shot put.
Like many other former Seacrest athletes, Gardner still stays in touch with a lot of his teammates, even working closely with them on the books and screenplays he’s writing.
Former quarterback for the team in 1963 and 1964, John Shipley, now a lawyer and coastal Delray Beach resident, also recalls those two-a-day workouts and believes they did more than just make the Seahawks the best-conditioned team on the field every time they played.
“What we learned back then is that hard work and dedication pay off,” Shipley says. “If you looked at everyone who played on our team, all of these guys are doing well. “There are doctors, lawyers, businessmen, police officers and firefighters and even a few who had successful military careers.”

School gone, but athletes returning:  Snyder, who had been talking with Price for a couple of years about a reunion, says athletics at Seacrest also played an important role in shaping her career as an associate director of athletics at East Stroudsburg University in Pennsylvania and also as a former women’s college softball and volleyball coach.
Although structured sports for girls were limited back in the late 1960s and early ’70s, Snyder organized tournaments and other activities, so it’s not surprising that she is taking the lead in helping to make the athletes’ reunion possible.
Already, she says, close to 100 former Seahawks have signed up and they are coming from all parts of the country.
Many are coming to honor Price — who former basketball standout Tom Smith of Ocean Ridge says was always the best player on the team — and Coach Randy Cooper, who also had a long career at Seacrest.  Other coaches are also expected to attend.
For Price, the reunion will help fill a void created when the old school building, just a few blocks from his home, was torn down a couple of years ago.
“I felt like a part of me was lost when we lost the school,” he said.
But expect the spirit of the Seacrest Seahawks to live on for a couple of nights in July and, if you go, also expect to hear lots of stories about guys with nicknames like “Bones” and “Gunner.”
You’ll hear the alma mater’s song, too, which was sung on the bus every time the basketball team returned home from a game.