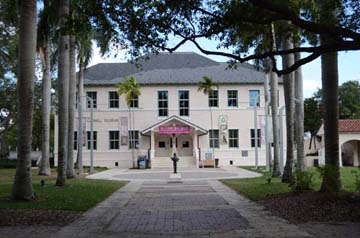 For three and a half years, Frances Bourque and a small but tireless group worked on an enormous undertaking — which many at the time thought might never get done.
Aiming to convert a 1913 elementary school and a 1925 high school into a cultural arts center, they held innovative fundraisers and made numerous trips to Tallahassee to persuade state officials to send down a bucketful of grant money, all the while rallying local support.
After months of restoration, renovations and construction, on one night in March 1990, the doors to the Cornell Museum of Art and History — the first building in what would evolve into Delray Beach’s landmark Old School Square complex — finally opened.
Now, 25 years later, a series of historic buildings once on the verge of crumbling from neglect remains a crown jewel for the city of Delray Beach. The Delray Beach Center for the Arts at Old School Square stands today as a monument to perseverance and to a commitment to restore a sense of pride weakened under the weight of the 1980s economic downturn. 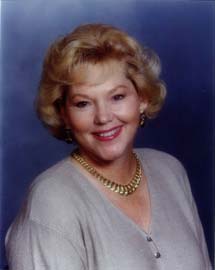 On that first night, the community celebrated the opening of a local exhibit featuring the work of Florida women photographers with a black-tie reception packed with state and local dignitaries. As they listened to a presentation from Florida’s then secretary of state, Jim Smith, and watched as a who’s who of Delray Beach gathered, Bourque and her team were filled with a sense of accomplishment but also the realization there was still much more to do.
“We had taken something abandoned and old and gave it back to the community and in so doing we gave back a sense of community that had been lost,” Bourque said recently. “That night, there was a sense of pride and understanding that we were just beginning and that ‘you ain’t seen nothing yet.’ ” 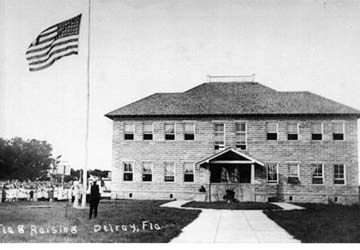 The buildings at the intersection of Atlantic and Swinton avenues housed schoolchildren for decades before being abandoned to neglect and decay in the 1980s. Photo provided

Since those early days, the Delray Beach Center for the Arts at Old School Square has continued to grow, first in 1991 with the opening of the Vintage Gymnasium and then in 1993 with the opening of the Crest Theatre. Later, classrooms and an outdoor pavilion would be added, as Old School Square quickly became Delray Beach’s version of a modern-day town square.
What few people know is that the idea for a cultural arts center on the site of two historic school buildings might not have surfaced if the then-Palm Beach County Clerk of the Court hadn’t put the kibosh on an idea to build a South County courthouse on the site.
“The idea of putting a cultural arts center there was a fallback,” says Doak Campbell, who served as mayor from 1986 to 1992. “My original idea was to make it into a South County courthouse and have a courthouse square.”
It was Campbell who first approached Bourque with the idea of transforming the vacant and deteriorating school buildings into a cultural arts center.
“The property was fast becoming the focal point of a decaying city,” Campbell said. “We wanted it to be seen as a focal point of a vibrant and revived community.”
Many today see what Bourque, Campbell and others accomplished at the corner of Swinton and Atlantic avenues as the beginning of the Delray Beach renaissance.
They also see the programming of entertainment and exhibits at Old School Square, guided for more than a quarter of a century by President and CEO Joe Gillie, as continuing to make the Delray Beach Center for the Arts a gathering place for the entire community.
“We’re the city’s front yard, the city’s gathering place” says Bill Branning, the current chairman of the Delray Center for the Arts’ board of directors, who also was involved in the restoration of the historic buildings in the late 1980s. “We also provide a total cultural opportunity for the Delray Beach area that few other communities can offer.”
For her part, Bourque remains on the Delray Beach Center for the Arts board and is deeply involved in its continued evolution.
“This year we’re celebrating that the cultural center of Delray Beach has been alive and well for 25 years,” she said.

The Delray Beach Center for the Arts at Old School Square is celebrating its 25th anniversary season, which will culminate with the 25th Anniversary Gala on Nov. 7. The special fundraiser will feature a farewell performance by Joe Gillie — who is leaving after 25 years — and long-time performing partners Susan Hatfield and Kay Brady, plus special guest stars. The performance will be followed by dinner in the Vintage Gym.