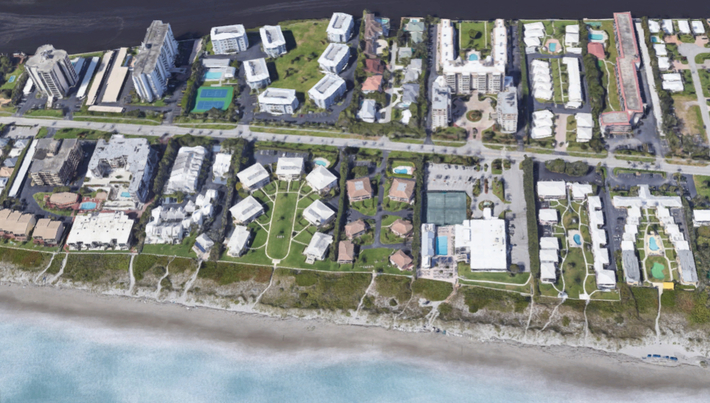 An analyis by The Coastal Star of Palm Beach County property records shows Delray Beach has 91 condos and co-ops on the barrier island. Of these, 75 were built prior to 1982. Above is an aerial photo of the south end of Delray's barrier island. Google Maps

By Jane Smith
The city’s chief building official is representing Delray Beach on a countywide task force created in reaction to the June 24 horrific collapse of a Surfside condo building, commissioners agreed on July 6.
The Palm Beach County League of Cities called officials from the county's 39 municipalities together to create rules for recertifying older condos, interim City Manager Jennifer Alvarez said. The first meeting of the building officials was July 2 and the next one will be July 9. Chief Building Official Steve Tobias will represent Delray Beach.

Only two Florida counties — Broward and Miami-Dade -— require condos over 40 years old to be recertified.
“If we need to move quicker than the county, we can do that,” Alvarez said. One reason would be that Delray Beach does not have as many high-rises as its neighbors to the south and north, she said.
The city will send letters to condo associations based on the building’s age, reminding them “that you are in charge of maintenance,” Alvarez said. The letters will be sent by July 9, she said.
Delray Beach, as other cities, inspects buildings only while one is under construction, being repaired or when someone makes a complaint about a condo’s structural integrity.
“I think the city is lax for not having anything,” Vice Mayor Shirley Johnson said. “I don’t want to be the next Surfside.”
In Surfside,officials say 145 people are either missing or dead.