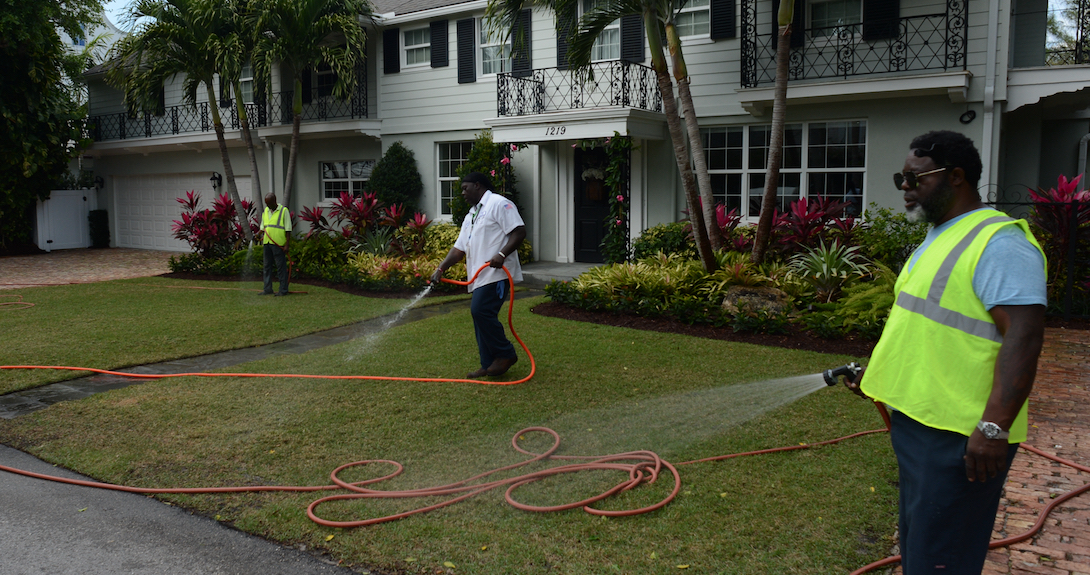 In an effort to help Delray Beach residents who have been without their reclaimed water service since early February, employees like Curtis Duscan, (center)  and city contractors Clay Carroll (left) and Anthony Coates have started watering lawns on the barrier island.  Jerry Lower/The Coastal Star

Delray Beach began providing a watering service on March 5 to barrier island residents who signed up for it.

The residents have been without reclaimed water service since Feb. 4. The city turned off the system to prevent the state Department of Health from issuing a citywide boil-water order.

The city has 613 residential reclaimed water accounts on the barrier island, according to Gina Carter, Delray Beach spokeswoman. On March 3, the city offered watering service and asked residents to sign a waiver allowing workers on their property to water lawns and shrubs.

Reclaimed water is treated wastewater that the city supplies to irrigate lawns and shrubs on the barrier island and other areas of the city.

“My wife called the water department Wednesday (March 4) and they said they hoped to get to our house this week to water the lawn and shrubs,” said Bill Petry who lives on Vista Del Mar Drive North. “They also said they would return 2 to 3 times per week.”

The water truck came by the next morning, much to the relief of Petry. There had been little rain in the past week and afternoon temperature reached an unseasonably hot 90 degrees.

The reclaimed water was supposed to return by March 7. Delray Beach leaders could not be reached for comment about the delay.

As part of the effort to hold back the citywide boil-water order, every reclaimed water installation was checked citywide, City Manager George Gretsas wrote to the Health Department on Feb. 11. No “cross connections were found,” his letter said.

But the city found that between 200 to 300 reclaimed water systems did not have backflow preventers citywide. The devices prevent reclaimed water from flowing back into the drinking water when pressure builds up in that system.

Since the reclaimed water program started on the barrier island in 2009, the city has spent $5.5 million to install it. About 30% or $1.6 million of the total came from South Florida Water Management District grants, according to Carter.