“I’m absolutely in support of this change,” said Mayor Shelly Petrolia, who sits as the CRA chairwoman. “We need to offer the Lake Ida and beach residents the same service that they had with the Downtowner.” 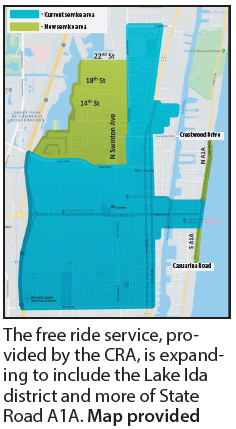 Along the beach, A1A will be served starting at Crestwood Drive on the north down to Casuarina Road on the south. (The four blocks of A1A divided by Atlantic Avenue are already in the CRA.)

BeeFree Holdings won the CRA bid for the point-to-point service in the summer of 2019.

The company operates under the Freebee name and has five open-air, electric-powered vehicles that cost the CRA $401,560 annually.

While the rides are still expected to be free for people in the expanded service area, users may have to wait longer for a driver to come, Petrolia said.

The Downtowner stopped operating in Delray Beach on Oct. 1, 2018, when its business model changed from relying on advertising to one that required a subsidy from the city.

More of the barrier island was served by the Downtowner, Bob Victorin, president of the Beach Property Owners Association, said during public comment.

He suggested a service area between the Intracoastal to A1A and from Casuarina north to George Bush Boulevard.

If the data show longer wait times, the city could provide some of its parking meter revenue to pay Freebee for  another car, Petrolia said.

When Freebee started operating Sept. 6, all rides had to begin or end in the CRA district.

That area has the interstate as its western boundary and the beach as its eastern one for the four blocks straddling Atlantic. It goes north to Lake Ida Road and south to Southwest 10th Street.