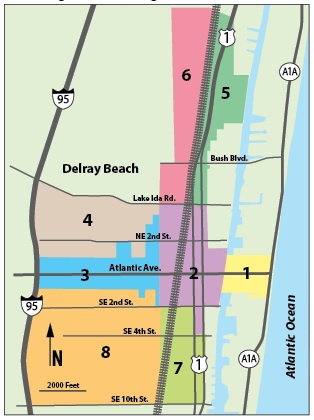 The Delray Beach Community Redevelopment Agency covers nearly 2,000 acres. Most of the city’s taxable values are in that district. In late April, the city requested the CRA analyze the financial effect if subarea No. 1 was no longer part of the district. The request grew to include all 8 subareas. The CRA is seeking proposals to do the analysis. If boundary changes are made, they would go into effect for the 2016-17 financial year. SOURCE: Delray Beach CRA

The rift between the Delray Beach City Commission and the city’s Community Redevelopment Agency board continues to widen.
During an April 29 meeting to discuss common goals, the two sides sat on opposite sides of the table. Mayor Cary Glickstein set the tone quickly after welcoming everyone including the CRA commissioners and staff.
“Since you guys have the money, and we don’t have the ability to do a PowerPoint, Mr. (Don) Cooper (city manager) will give a rudimentary presentation.”
The mayor circled around his main point and then he bluntly said, “We are broke.”
The showdown-style seating indicated the unease between the two groups.
“I was going to say that I hear both sides and I think we are not meshing well. The CRA is doing exactly what it is supposed to be doing,” said Vice Mayor Shelly Petrolia. “But what has happened is that we found ourselves on the other side of the coin, short because we can’t do our job.”
Added Cooper: “I don’t have the ability to add police officers, code enforcement officers, people necessary in other parts of the city because most of the taxes are going to the CRA.”
Glickstein said he asked a demographer friend at the University of Miami to compare the CRA to similar agencies statewide. He ticked off three items including this one: No CRA receives the high percentage of property taxes as the Delray Beach one collects.
“It’s not a question of if the CRA will make it to its sunset date in its current configuration,” he said, “but when is that transition going to start to occur.”
The meeting’s direction surprised some CRA board members.
“I appreciate the opportunity to come in,” board chair Herman Stevens said to the mayor. “I didn’t foresee that we would talk about the relevance of the CRA. So I wasn’t prepared to engage in that conversation … I didn’t see this coming like this; I don’t think it’s fair.”
To outside observers, Delray Beach has a booming downtown. Special events seem to take place every few days; the city has a thriving nightlife and eateries to satisfy every taste.
City commissioners, though, say residents, retailers and restaurant operators complain about the street-closures for the special events. City staff say they lack enough time and money to keep the downtown streets safe and clean.
Shortly after the joint meeting, the city requested the CRA analyze the financial effect from reducing its eastern boundary from Ocean Boulevard to the Intracoastal Waterway and then to Federal Highway and eventually to cover the entire CRA district.
That would put more tax money into city coffers and reduce the CRA’s intake from the wealthy beach area.
During a CRA board meeting on May 14, Executive Director Jeff Costello told his board the analysis would be based on county property records and the boundary changes, if made, would be in place for the CRA’s 2016-17 financial year.
“We left the workshop discussing adjusting our budget to take on more financial responsibilities and the boundaries seemed more of a long-term discussion,” CRA Vice Chair Annette Gray said. “The next day the memo came out where they want the boundaries to be. They are just placating us.”
When the CRA was created 30 years ago, a base property value was set for the 2,000-acre district, appraised then at $280 million. The agency receives the difference in property taxes between the base and the current values, now closer to $1.2 billion. That difference translates into nearly $7.7 million for the agency annually, while the city collects $1.7 million.
The CRA board on May 28 approved by a 5-1 vote the proposal that Costello had prepared. Stevens voted no and Gray had left the meeting.
The agency plans to advertise June 1 that it is seeking the analysis, with replies by June 22. The report is estimated to cost $50,000, Costello said.
A second report, requested by the CRA board, would compare the agency to CRAs nearby. Costello estimated this report to cost $7,500.
A third optional report would cover the agency’s role as a Delray Beach economic engine. No cost estimate was given.
The two groups will meet again in July although the date has not been set.
At the city’s request, the board agreed on May 14 to add $1.1 million in its next financial budget to cover six items, including $500,000 for the Clean and Safe program.
Two weeks later, CRA chair Stevens continued to object to the fast pace at which the city was moving.
“We need to have town hall meetings, charrettes to tell the residents what is going on,” Stevens said at the CRA’s May 28 meeting. “After 30 years, it is suddenly doom and gloom. I have a big problem with how this is proceeding.”Ú