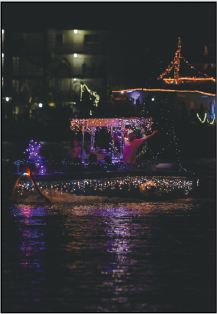 Delray Beach city commissioners approved spending nearly $5,000 for the city’s share of the annual Boynton Beach-Delray Beach boat parade on Dec. 9.
But they did not want the money coming from the city manager’s discretionary fund. They saw it more as a low-cost marketing opportunity, not an emergency expense.
“The boat parade brings a large amount of goodwill from the homeowners and business owners [along the Intracoastal Waterway] who pay a disproportionately large property tax bill and look forward to it,” Mayor Cary Glickstein said
The Boynton Beach Community Redevelopment Agency hosts the boat parade. In recent years, it has tried to get Delray Beach to pay part of the costs. Last year, Delray Beach scrambled and was able to raise the bridges for the boat parade.
— Jane Smith