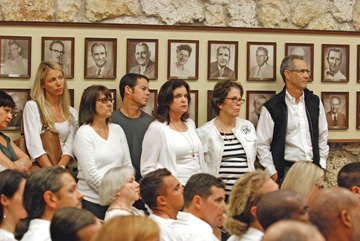 Neighbors of the home Caron purchased stand in front of portraits of former Delray Beach mayors and wear white to protest the rehabilitation center’s request to turn its property into a sober house during a meeting at City Hall. Jerry Lower/The Coastal Star

The Caron Foundation has sued Delray Beach after the city denied its request to operate a sober house for seven recovering alcoholics and drug addicts at 1232 Seaspray Ave.
City commissioners also had responded to outrage over sober houses near the ocean on Feb. 21 by approving three ordinances to make it more difficult and restrictive for treatment providers to operate in the city.
“The city might not like it, but our rights are well settled by federal laws,” Caron vice president Andrew Rothermel responded, calling the city’s actions discriminatory. “I don’t think the commissioners had the will to do the right thing in light of the public outcry.”
The denial to operate the Seaspray house came in a Feb. 22 letter from planning and zoning director Paul Dorling, who said Caron had failed to show why seven residents were necessary for the house to be “therapeutically successful” and “financially viable.”
A parade of upset residents had implored commissioners at a Feb. 21 public hearing to protect their single-family neighborhoods.
“Your taxpayers are angry,” resident Louise Kornfeld said. “We expect you to fight this battle with us.”
“I’m sick and tired of bumping into every junkie who lives in Delray Beach,” Anita Casey agreed. “Let’s kick Caron out.”
Caron’s Rothermel has asked residents to give them the chance to show they can be good neighbors. He has stressed the house is intended for wealthy executives in recovery who will be paying some $50,000 a month to live in the house. They will receive their treatment in Caron’s facility in Boca Raton.
The most significant new ordinance reduces the turnover of bedrooms rented to alcoholics and drug addicts from six to three times per year. City commissioners also passed ordinances to beef up the application process to operate a sober house and to obtain a landlord permit.
“We designed our program to follow the city’s rules and they decided to change the rules midstream,” Rothermel complained after the three ordinances were approved. “If they use these ordinances to restrict us, they’re going to have a fight on their hands.”
The suit, filed Feb. 24 in federal court in West Palm Beach, seeks an injunction to prevent the city from enforcing the new rules. Caron also seeks attorney fees and damages, which it says could be in the millions.
Residents had urged commissioners on Feb. 21 to hang tough despite repeated threats of such a lawsuit.
“This is a big fight that you’re signing up for,” resident Jack Barrette said at the public hearing. “But the neighborhoods are behind you.”
The ordinance to limit rental turnovers would restrict treatment providers by forcing sober houses to operate at half their capacity, Rothermel said.
Recovering alcoholics and drug addicts typically stay in a sober house for two months. With only three turnovers allowed per year, each bedroom could only be used for six months per year.
“It’s really detrimental to have patients living in a house that’s half-empty,” Rothermel said. “They don’t get the benefit of a sober living environment.”
The right for treatment providers to house up to seven patients in residential neighborhoods was established in 2007 when Boca Raton attempted to limit sober housing. A federal judge struck down Boca Raton’s limit of only three patients per house after the American Civil Liberties Union argued that patients have a greater chance of recovery with more patients in a sober house.
The judge reaffirmed that recovering alcoholics and drug addicts are protected from discrimination under the federal Fair Housing Act and Americans with Disabilities Act.
Delray Beach, anticipating Caron’s lawsuit, had hired outside attorneys to advise how the city could fight sober housing by other means.
The new application procedure for sober house approvals requires that treatment providers provide an address for proposed sober houses so neighbors have time to object.
Most neighbors of the Seaspray Avenue house have posted signs in their yards declaring “Just Say No” to Caron’s housing plan and another neighbor installed a motion-sensitive webcam for surveillance on Caron’s house. They claim that the treatment provider already has been serving meals to clients who live elsewhere.
They also started a Facebook page, TakeBackDelrayBeach, where they update developments in the case and chronicle comings and goings at the house, such as a time police were called there. The page points out that police protection and trash removal are essentially free services, since Caron, as a nonprofit operation, pays no property taxes.
Neighbor Ray Jones said residents also considered an electronic protest sign outside the Caron Foundation’s gala at Mar-a-Lago in Palm Beach on Feb. 25, but were discouraged by Palm Beach police.
“The residents have created an environment where we were unable to find a win-win solution to this,” Rothermel said. “The silver lining for us is that we’re entitled in court to several million dollars per year in damages if this drags out.”