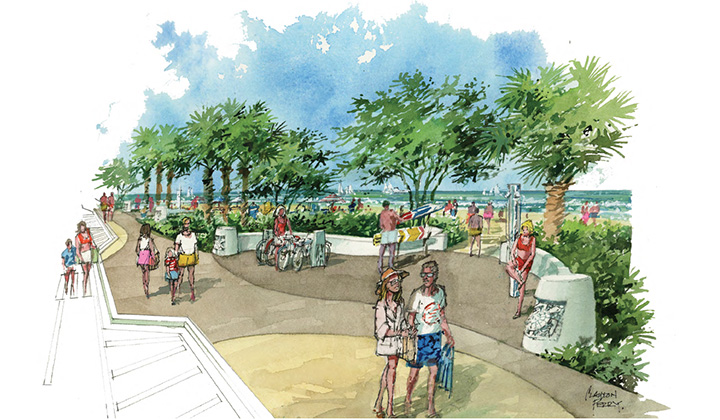 The plan by EDSA Inc. of Fort Lauderdale, which includes new benches,

refillable water bottle stations and paddleboard racks, was praised for its simplicity.

Delray Beach will soon have upgrades to its best asset: the beachfront.
The $3 million project will create a 12-foot-wide promenade on the west side of the dunes.
Improvements will include new benches, waste/recycling containers, bike-sharing racks, water fountains combined with refillable water bottle stations and surfboard/paddleboard racks.
The main pavilion at Atlantic Avenue and A1A will be opened on the north end to make it more usable.
EDSA Inc., of Fort Lauderdale, received unanimous City Commission approval in July for its simple and natural design. (Vice Mayor Al Jacquet left the meeting early before the vote was taken.)
The engineering firm took the conceptual drawings donated by architect Bob Currie to create its design scheme. Currie is vice president of the Beach Property Owners Association, which has been working on beachfront design plans for more than seven years.
“I’m impressed with EDSA,” said Bob Victorin, the association’s president. “They captured what the residents wanted — a natural design.”
The firm was open to taking suggestions from residents, commissioners and BPOA members, he said. He liked the 31 portals that EDSA wants to save to allow beach access between the dunes.
Jim Smith, chairman of Safety as Floridians Expect, told the City Commission, “The update of the beach promenade will be but one of your many legacies. The EDSA design plan is brilliant in its simplicity.”
Commissioners also gave the city manager and staff authority to move the project along. The final design will be reviewed by the commission before it will be sent out for bidding. The goal is to have the majority of the project done by January.
The area from Casuarina Road north to the end of the public beach, about 1.3 miles, will be redone in this project. EDSA will be paid $429,350, plus $35,000 for expenses.
In addition to the final design and construction oversight, the firm will secure state and local permits. “They will be with us until the ribbon cutting,” said John Morgan, director of the city’s Environmental Services Department.
The commission liked the city standard benches and trash/recyclable containers in gray because green would stand out more at the beach initially and then fade and have to be repainted more frequently.
The height of the sea grape canopy also was discussed, with Commissioner Shelly Petrolia calling it a distinguishing characteristic for the city’s beach.
The sea grapes will be trimmed as part of the dune management project, separate from the beach promenade.
Commissioners like the idea of walking under the sea grape canopy to get to the beach. But Morgan reminded them that the sea grapes were dominating the beach plantings, creating a “monoculture” and not allowing other lower plants to survive.
The mayor said Morgan and the dune management consultant should determine areas where the trimming needs to be done and to consider the health of the dune first.
“I’m excited about the project,” Petrolia said. “But we will get pushback (from residents) when the sea grapes are trimmed.”
In other business on July 5, the commission approved:
• Hiring the Wantman Group of West Palm Beach to do a structural engineering design, engineering and permitting needed to raise the seawall height by approximately 3 feet and replace the public docks on the east side of Veterans Park. Both have been damaged by many years of seasonal high tide events. The firm will be paid $57,830.84 for the work, which also will include overseeing the construction.
• Creating a pilot employee parking program at the South County Courthouse Parking Garage.
Business owners would pay $20 per employee monthly for their workers to park there, with the goal of getting their vehicles off Atlantic Avenue and side streets to allow customers or diners to use the parking spots.
The program, which had a soft launch Aug. 1, will have a full launch in November and last for one year.
Weekdays, 200 spaces will be available between 3 and 6 p.m. with an additional 150 spaces available from 6:01 p.m. to 3 a.m.  Weekends and holidays when the courthouse is closed, 350 spaces will be available between 11 a.m. and 3 a.m. the next day. All vehicles must be removed before the next court business day. The Delray Beach Police Department will enforce that rule.
The Downtown Development Authority is working on finding a partner to provide transportation to  downtown for employees and back to the garage when their shifts end.
The garage also will be open for special-events parking at a cost of $5 per vehicle.