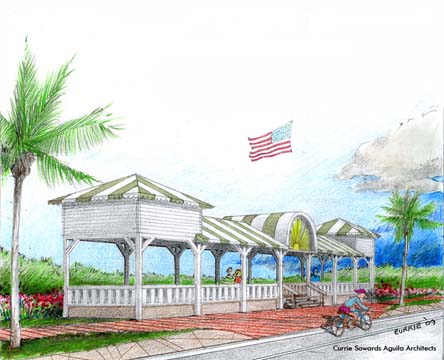 The new pavilion will replace the existing pavilion at Atlantic Avenue and A1A.

A new pavilion on the beach at Atlantic Avenue has the green light for Delray Beach to select a contractor and start construction.
“We’ve gotten approval from the state to go ahead,” said local architect Bob Currie, who donated the pavilion design. “Now we’re allowed to get a contractor through competitive bidding.”
The Florida Department of Environmental Protection granted the state permit. City officials set a May 2 preconstruction meeting for interested contractors.
“We’re anxious to get it done,” Currie said. “It looks like it’s finally going to happen.”
The go-ahead is a victory for the Beach Property Owners Association, which raised $59,165 for the pavilion after going to city commissioners in 2009 to request a master plan to dress up the municipal beach.
“The new pavilion is a big part of the beach master plan,” association President Andy Katz said. “It sets the style and tone for other things that need to be done in the beach area.”
The existing pavilion must be replaced because its steel rods and ties have rusted, making it structurally unsound.The new design pays homage to Delray Beach in the 1920s.
“But it will be built with modern standards for hurricane protection with stainless steel ties and rods,” Katz said.
The city has set aside $110,000 in its budget to construct the pavilion.
When that expense was almost cut from the city budget last year, the Beach Property Owners association hosted two Delray’s Got Talent competitions at Old School Square to raise money.
“This is a great example of public and private cooperation,” Katz said.
The contractor chosen by the city will start construction after city’s July 4 fireworks this summer.
Seaside Builders already has offered to build the pavilion at a reduced cost and Katz said another builder might do the same.
“We anticipate that, once the word gets out, a contractor will do this as a public service,” he said.