Crews pumped 4,583 cubic yards of concrete from about 500 trucks in one day last month for part of the underground garage floor at Atlantic Crossing. Noise from trucks awakened neighbors as early as 2 a.m. Photos by Tim Stepien/The Coastal Star

The first concrete mixer truck rumbled into Delray Beach in the predawn hours the first Saturday in October.
When it was over nearly 15 hours later, some 500 trucks had delivered 4,583 cubic yards of concrete to create part of the underground garage floor for the massive Atlantic Crossing project.
It was, according to the city, the longest and largest continuous concrete pour in county history.
“It was neat to see,” said Andy Spengler, president of Spengler Construction & Masonry Inc., which partnered with Titan America.
He arrived at the job site to the northeast of the intersection of Atlantic Avenue and Federal Highway just after midnight and stayed until 10:15 a.m. The work crews were already there, and the trucks began arriving about 1 a.m. That pour created one-fourth of the underground garage floor.
On Nov. 2 the trucks were scheduled to return again in the wee hours for another pour, although Spengler said that one would not be as large. Jordan Vance, who lives just south of the project, won’t be pleased to learn of another early morning. He posted on the Delray Raw Facebook page that he was awakened at 2 a.m. He shot a video of the truck caravan and added, “Will this project ever end, will I get to sleep again?”
Most of the nearly 40 people who posted responses agreed with the complaint about noise. Several bemoaned the change in Delray Beach from all the building, saying the city had lost its charm and appeal. 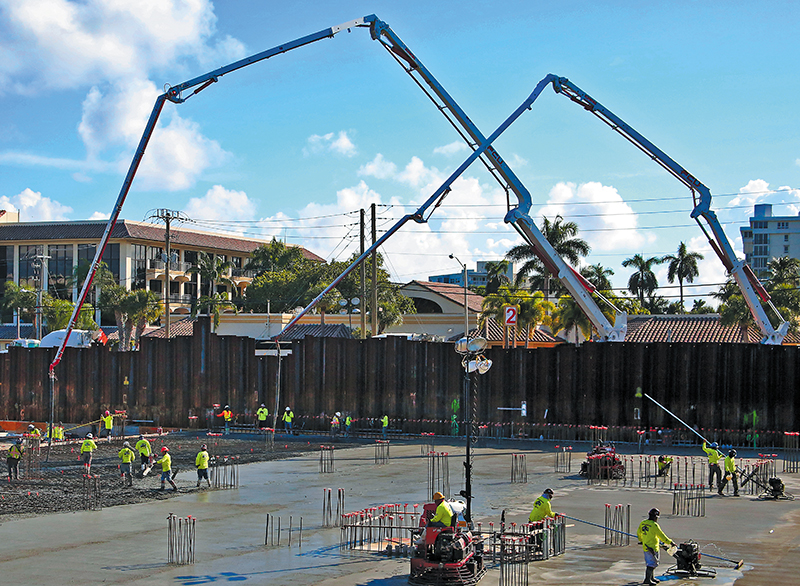 ABOVE: Workers smooth the concrete poured for the floor of the underground parking garage at Atlantic Crossing in Delray Beach. BELOW: Dewatering pumps run continuously to send groundwater from the site to the Intracoastal Waterway. 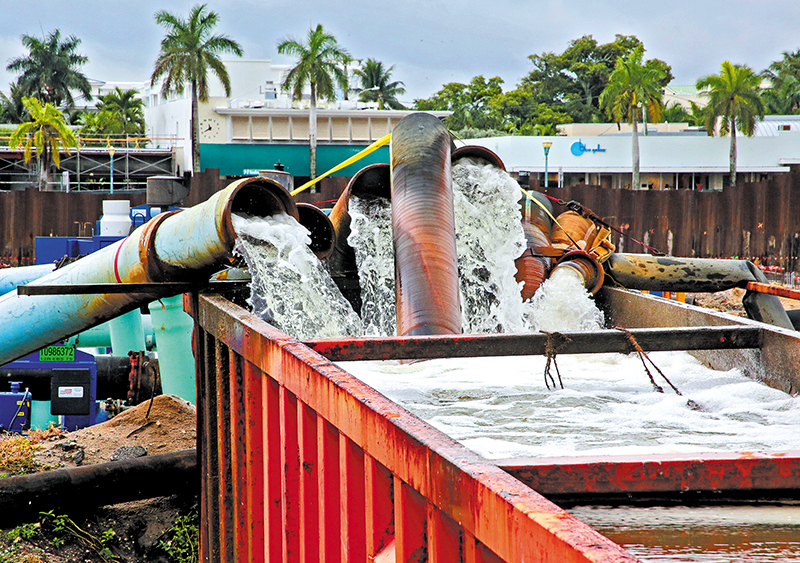 The city granted permission for the concrete mixer trucks to arrive in the predawn hours. The work was done early on a Saturday to minimize disruptions for commuters.
The site is only a block from the Intracoastal Waterway, so loud dewatering pumps run around the clock to rid the area of groundwater, which is filtered before flowing into the Intracoastal.
Records show the project complies with its permit from the South Florida Water Management District. That permit expires March 31, 2021.
The developer has said that after the garage is finished it will still need pumps and backup generators to use when the power goes out.
Excavation work on the other half of the site will continue as the underground garage is built. Two additional concrete pours will be scheduled depending on how quickly that work progresses. Spengler estimated the earliest date for the third pour would be in six weeks.
Now that the garage has begun, vertical construction can start by the end of the year, according to Edwards Cos. Vice President Don DeVere.
The $300 million mixed-use project occupies 9.2 acres and stretches along the north side of Atlantic Avenue from Northeast Sixth Avenue to Veterans Park.
Edwards has signed three lead tenants for its retail and office building, which is projected to open in the fourth quarter of 2020.
Two current Atlantic Plaza tenants that will move into the new building are Merrill Lynch and Chico’s, a women’s fashion store. The financial firm will occupy the entire 20,000-square-foot third floor of the new building and Chico’s will rent 3,150 square feet in a shop facing Atlantic Avenue.
The new tenant is Chicago-based Hampton Social, a lifestyle-experience restaurant that has leased 8,677 square feet.
DeVere also said the project’s first luxury residences would be finished in 2021 and park-side residential units would be added in 2023. 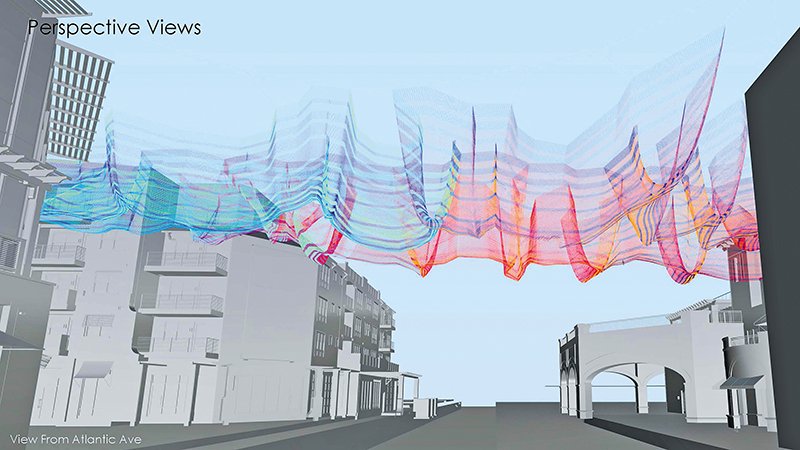 An aerial fiber artwork by sculptor Janet Echelman would fill part of the space. Rendering provided

Artwork proposed
The developer also wants to replace proposed central artwork of a tall aquarium with a 209-foot, multicolored aerial fiber artwork by noted sculptor Janet Echelman.
She was inspired by fishermen in India when they were hand-tying their nets, according to her 2011 TED Talk. Echelman, a Tampa native, has a studio in the Boston area. She has said the work will mimic the flow of the Intracoastal from New England to South Florida.
Edwards CEO Jeffrey Edwards loves art and Echelman’s work, said Paul Campbell, one of the project’s architects.
Campbell represented Atlantic Crossing before the city’s Site Plan Review and Appearance Board in mid-October as he sought approval for landscaping and design changes in addition to the aerial sculpture.
The building engineers need to know whether the soaring artwork is approved, Campbell said, because they will have to design the buildings to carry the load.
One board member asked whether the artwork could withstand hurricane winds. Campbell said it could, but he did not know the exact wind speeds. The piece will not be removable, but will be attached to a cable that is then attached to the four buildings by metal cables.
Another board member asked about the artwork’s impact on birds and people below. Campbell said he did not know, but Echelman would. He said she would come to a future board meeting.
Board members said they liked the aerial artwork, but postponed the decision on the artwork and other changes because they were not given a complete list of requested changes from the 2014 plan. Most of the current members were not on the board when the site plan was approved.
The project will be discussed at the Nov. 13 board meeting.
Atlantic Crossing will transform nearly everything about that four-block piece of downtown Delray Beach.
The project will add traffic, stores, offices and restaurants to the area, which sits just north of the Marina Historic District, whose small houses and narrow streets date to the 1930s.