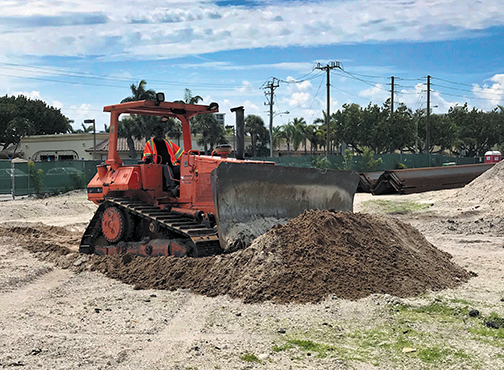 Sophisticated saxophone sounds beckoned attendees under a tent at Northeast Seventh Avenue and First Street — the future home of Atlantic Crossing.
Fruit-infused water, along with bowls full of fresh fruits, individual blueberry and apple muffins, and slices of banana bread helped to create a fresh start for the early May groundbreaking.
The $300 million complex of residences, offices, stores and restaurants was at least a decade in the making — maybe two, said Jeff Edwards, president and CEO of the Edwards Cos., an Ohio-based development firm.
The original owner, real estate investor Carl DeSantis, brought in Edwards as its development partner in 2012 for the complex that sits at the prominent corner of Federal Highway and Atlantic Avenue in Delray Beach.
In 2015, the development team sued Delray Beach, Edwards said. The two sides reached a settlement last spring that resulted in an access road off Federal Highway into the project, traffic calming efforts for the Marina Historic District and Palm Trail neighborhoods, and other conditions.
The Palm Trail entrance at Northeast Seventh Avenue already is closed to vehicular traffic with a series of bollards and large planters. Pedestrians and cyclists can still make it through on the sidewalks.
“We’re ready to get started and be a good neighbor,” Edwards told the gathering. “We won’t let anyone down.”
Mayor Shelly Petrolia was cautious. “It’s exciting, but there still are concerns,” she said. “We fought long and hard to get to this point.”
DeSantis sold the project to Edwards in June 2016 for $38.5 million, but he remains involved in the nearly 9-acre project through a $16.5 million loan on the eastern half that houses Atlantic Plaza. He did not attend the groundbreaking ceremony. His right-hand man, Bill Milmoe, was there.
“We are re-imagining two city blocks,” said Don DeVere, Edwards vice president. “In the next few years, we will transform the area.”
Atlantic Crossing will have 82 luxury condos, 261 high-end apartments, 83,000 square feet of office space and 76,000 square feet of retail and restaurant space.
The first thing passers-by will notice is the excavation of the underground parking garage on the northwest part of the project, DeVere said. The groundbreaking ceremony featured a bulldozer pushing loads of dirt, instead of officials digging into the soil.
DeVere said the water from the excavation will go through a highly regulated process before it is drained into the Intracoastal Waterway.
Edwards will begin the excavation by June, even though it still needs Florida Department of Transportation approval for the access road from Federal Highway and the driveways along Northeast Seventh Avenue, which is now a private road, DeVere said. He called the applications “formalities.”
Delray Beach Vice Mayor Adam Frankel, who is on his second go-round on the commission, told the 50-plus attendees at the groundbreaking what he said in 2009: “If Carl DeSantis wants to spend a quarter of a billion dollars in our downtown, then we should send a limousine for him to pull the building permits.”
According to its settlement with the city, Edwards is obligated to pay $125,000 for traffic calming efforts in the Marina Historic District. The money is not due until two buildings on the southeast corner are finished. That’s estimated to happen in summer 2019 at the earliest.
But district leaders don’t want to wait until then. They met with the city manager in late May to urge the city to find a way to pay for the improvements this year. The traffic calming items include medians, a traffic circle, sidewalk bump-outs and speed bumps.