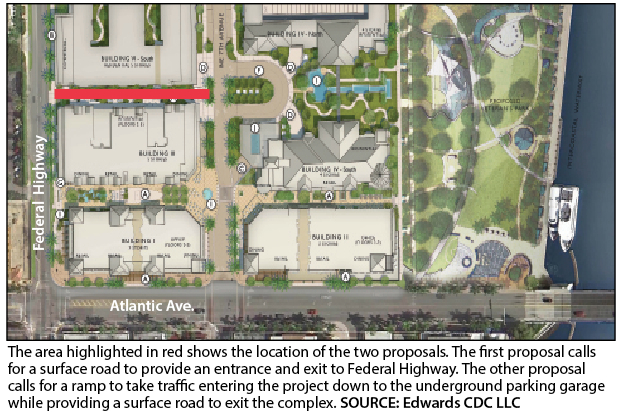 By Jane Smith
and Tim Pallesen

Just eight days after offering two road options inside the proposed Atlantic Crossing, its developer sued the city of Delray Beach for delaying the project.
Edwards CDS LLC filed its lawsuit June 24 in Palm Beach County Circuit Court claiming the city has not issued a site-plan certification that was approved in November 2013 and affirmed by a previous City Commission in January 2014.
The proposed $200 million development sits on 9.2 acres of East Atlantic Avenue in the city’s downtown. The project, developed by a partnership between Ohio-based Edwards Companies and Ocean Ridge resident Carl DeSantis, will contain 356 luxury condos and apartments plus 80,000 square feet of restaurants and shops and 79,000 square feet of office space.
“We have an approved plan and after many months of costly, time-consuming delays, we strongly believe we are entitled to site-plan certification,” said Don DeVere, vice president of mixed-use development. “The city has inappropriately withheld certification of our site plan approved in November 2013.”
Delray Beach City Attorney Noel Pfeffer said the city “has done nothing improperly in connection with the project.” He intends to file the city’s response well before the 20 required days.
Despite the lawsuit, the developer “remains open to working with the city on refinements to the plan,” DeVere said.
On June 16, Atlantic Crossing’s developer voluntarily presented two alternate designs for a surface road to city commissioners.
The partnership spent thousands of dollars to study the concept, including hiring a traffic consultant and producing traffic-flow animations of the two options.
One option would put a road similar to Atlantic Court back into Atlantic Crossing as an east-west surface road from North Federal Highway to relieve traffic congestion on East Atlantic Avenue.
The other option, preferred by the developer, was an entrance directly into the underground garage that would be parallel to a one-way surface road and would exit the project from Northeast Seventh Avenue to North Federal.
Neighbors have continued to oppose the traffic design for the mixed-use project after a previous commission approved a site plan in January 2014 without Atlantic Court as an access road from North Federal Highway.
“I appreciate your willingness to come back to the table with a spirit of compromise,” Mayor Cary Glickstein told the developer. “In doing so, you will engender goodwill.”
Even so, commissioners agreed to hire traffic experts Simmons & White from West Palm Beach to help city staff decide which of the two road designs is best. The contract is for $12,500 plus $1,000 for expenses.
The revised site plan might still go to the city’s Site Plan Review and Appearance Board for review. Commissioners still must approve a final development agreement with the developer. The final site plan will be an exhibit to that agreement