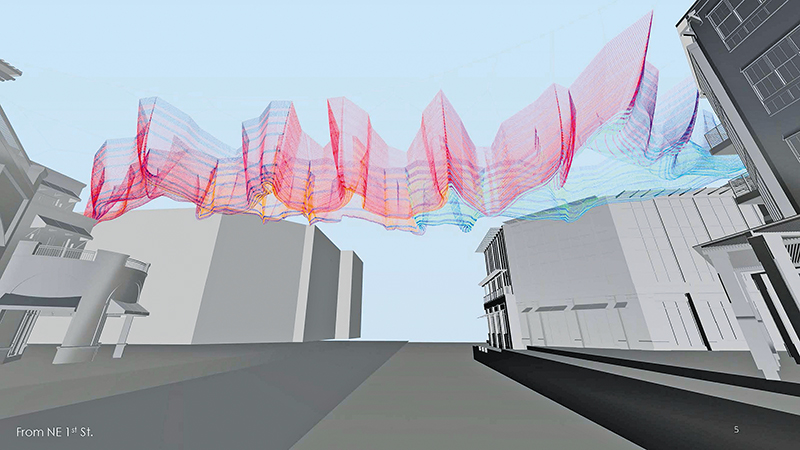 Once construction of the four main buildings is complete in the Atlantic Crossing project, art that represents fishing nets will be erected to link them. Rendering provided

The Atlantic Crossing project in downtown Delray Beach will sport an aerial net sculpture when it’s finished in about four years.
There are four buildings that need to be finished to hold up the 209-foot-long aerial sculpture spanning Northeast Seventh Avenue, about one block north of East Atlantic Avenue, said Paul Campbell.
Campbell, the project’s main architect, said he didn’t know the estimated end date when he appeared Nov. 13 before a city advisory board.
The Atlantic Crossing developer, the Ohio-based Edwards Cos., also declined to give an estimated end date. In August, the company predicted the project would be fully developed by 2023.
The $300 million mixed-use project occupies 9.2 acres at the northeast corner of Northeast Fifth and East Atlantic avenues.
Don DeVere, Edwards vice president, wrote through his publicist Andrea Knibbs that the first building is on schedule to break ground by the end of the year. It will be a combination of retail, restaurant and office space with three signed tenants.
The first floor of that building will stand at 11 feet on the east side and 13.3 feet on the west side, Delray Beach spokeswoman Gina Carter wrote in a Nov. 18 email.
The garage underneath that building has a 3-foot-thick slab, making the garage ceiling height 9 feet 6 inches, according to Carter, who answered questions directed to the city’s Public Works Department.
The city’s Site Plan Review and Appearance Board approved the aerial sculpture and other project changes unanimously on Nov. 13 in its second meeting on the issues. When Campbell came before board members on Oct. 16, he was unable to answer all their questions about the aerial sculpture and other changes.
The sculpture, made by fiber artist Janet Echelman, will be supported on a frame that is attached to the four buildings, Campbell said. The frame stands out 8 to 10 feet from the buildings, minimizing contact with the structures.
“It can withstand 185-mph winds, just like the buildings,” he said. “But the sculpture can be damaged by flying debris.”
The Atlantic Crossing developer is discussing at what wind speed the sculpture will come down, what kind of process will be used — manual or powered — and what kind of fabric will be used to create the netting.
“There are two choices,” Campbell said. “Polyester nylon is cheaper but lasts about five years. The 20-year solution is a Teflon fabric, but it’s more costly.”
A similar Echelman sculpture is going up in the St. Petersburg Pier District, he said. There, the team had to satisfy the Florida Fish & Wildlife Conservation Commission concerns about bird safety. The team was able to show that even a subtle breeze makes the sculpture move, keeping birds away, Campbell said.
Trellis added to road
Another noticeable Atlantic Crossing change is the addition of a trellis covering the two-way road that will be created to connect Northeast Federal Highway to Northeast Seventh Avenue. The road also will have a speed bump to slow traffic.
Nearby raised planters will be deeper, allowing for more soil and a variety of plants, Campbell said.
Other changes are minor touches to the architecture to create more interesting columns and other features.
A Palm Trail Homeowners Association representative asked about the temporary closure of Northeast Seventh Avenue and Northeast First Street. That group wants to close the intersection permanently to vehicles.
The city’s principal planner, Scott Pape, explained the review process.
One year after the last building is issued a certificate of occupancy, the city engineer and city staff will evaluate whether a permanent closure is needed, Pape said. The process was included in the developer’s conditions of approval.
Overall, the SPRAB members liked the changes that Campbell presented.
“I like it,” said vice chairman Todd L’Herrou. “A lot of little changes made a big difference.”