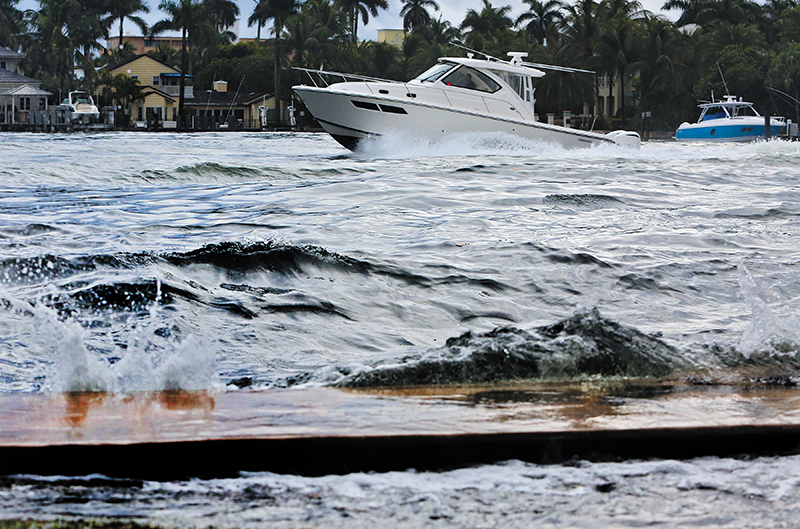 Waves from boats’ wakes wash over a sea wall and stir up the Intracoastal Waterway in Delray Beach. The city said it would ask the state to consider rising sea levels in setting lower speeds. Some residents have built higher walls but are still concerned about potential property damage and want a no-wake zone. Photos by Tim Stepien/The Coastal Star 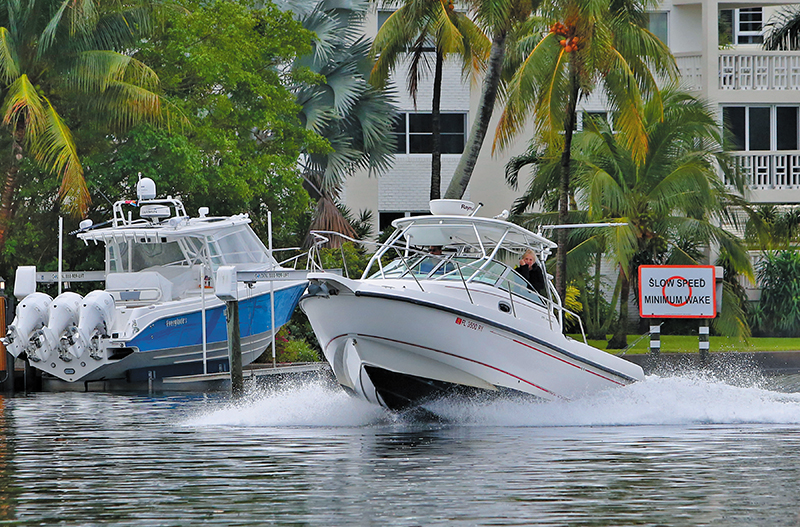 Palm Trail residents are asking Delray Beach city commissioners to take action against rising tides and seas and reduce boat speeds on the portion of the Intracoastal Waterway that runs beside their street.
In the stretch between the bridges at George Bush Boulevard and Atlantic Avenue, slightly less than a mile, residents see weekend boaters zipping by. The speed boats kick up wakes, which crash into and over sea walls and enter backyards and city-owned pocket parks, streets and drains.
The waterfront residents want to see a no-wake zone year-round across the waterway to protect their property and the city property, but the state controls the speed limits in the Intracoastal.
“You have to challenge the archaic rules that don’t take into account what others see as a crisis worldwide,” George Walden told commissioners at their Jan. 16 meeting. 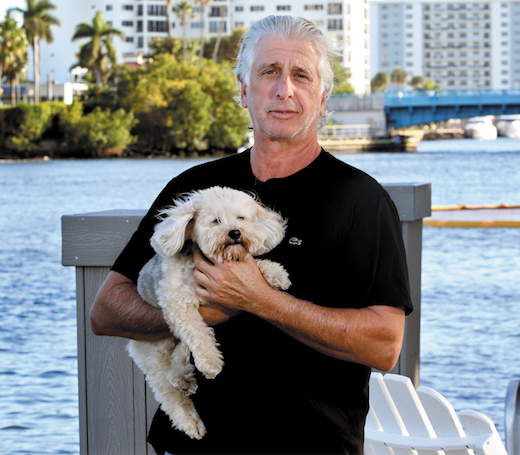 Walden, who lives on the Intracoastal, plans to raise his sea wall by 15 inches to combat the rising tides and keep his property from sliding into the waterway.
The commissioners, though, decided to take a baby step in that direction.
The city attorney will draft a resolution urging the state to consider the rising tides in their boating speed regulations. “We are preempted from drafting an ordinance regulating boat speeds,” City Attorney Lynn Gelin said.
Even so, some commissioners are leaning toward lowering the boat speed limits.
“We have new issues,” Mayor Shelly Petrolia said at the meeting. “Higher tides were not an issue just five years ago.” She wants to pursue “the low-hanging fruit” that she said should not be difficult to change.
The Florida Fish and Wildlife Conservation Commission enforces boating speeds and ensures wildlife safety in the Intracoastal.
To include rising tides would be a lengthy, multi-step process, FWC regional spokeswoman Carol Lyn Parrish said.
“The data on the rising tides and king tides has to be there to support restriction of the speed zones,” she said.
FWC maps show boat speeds in the waterway through Delray Beach are limited to 25 mph from Oct. 1 to May 31. The other four months, boat speeds are capped at 30 mph.
Year-round, a 50-foot-wide slow-speed buffer exists on both shores of the Intracoastal.
In addition, boats must maintain idle speed from 300 feet north to 600 feet south of the George Bush Boulevard bridge and slow speed with minimum wake from 300 feet north of the Atlantic Avenue bridge to 500 feet north of the Knowles Park boat ramp.
But boaters go faster than that on weekends, Walden, who lives north of the Atlantic Avenue bridge zone, said in a Jan. 17 memo to commissioners.
“I would invite each and every one of you to sit at my dock on any given weekend to view firsthand the reckless disregard of most boaters,” Walden wrote. 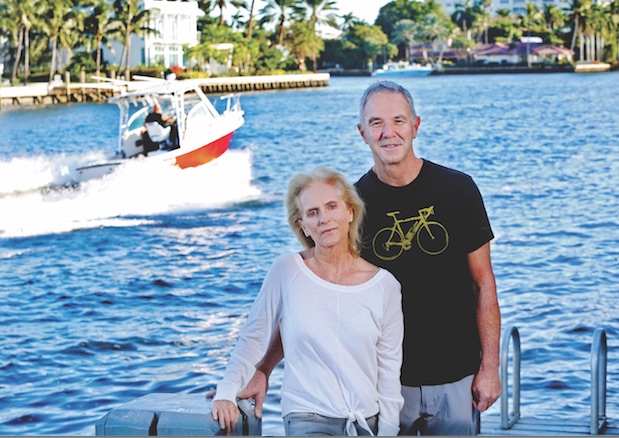 Jill and Eric Schifferli live on Palm Trail and have raised their sea wall by a foot to combat wakes. Tim Stepien/The Coastal Star

Jill Schifferli, who lives on Palm Trail and is president of the Palm Trail Homeowners Association, agrees. “Many residents have raised their sea walls,” she said at the Jan. 16 meeting.
They see the damage from the brackish Intracoastal water in the city’s pocket parks at the end of the streets. When boats go zipping by, residents can see the water bubble up through the drains near the waterway.
After the Schifferlis raised their sea wall by 12 inches, Jill and her husband, Eric, planted native Florida grasses that are salt-tolerant because the tidal flow killed their other grass.
“We want the city to help us with our situation by reducing the boat speeds,” she said. That also would reduce property damage for the city pocket parks and streets, she added.
Steve Plamann, who lives off the waterway on Northeast First Court, is nonetheless affected by rising seas. He said that during Hurricane Dorian last year, tidal water flowed onto his street. “It was the highest I have ever seen,” said Plamann, who has lived there for about 30 years.
Residents who live along the east side of the Intracoastal on the barrier island support lower boat speeds, said Bob Victorin, president of the Beach Property Owners Association.
“We met with the Palm Trail group to discuss this issue,” Victorin said. “Manatee protection is another reason for a low-wake zone.”
Manatee season runs Nov. 15 to March 31. Deaths of manatees have been rising in Florida, Jill Schifferli said at the meeting. In 2019, manatee fatalities from collisions with watercraft were up 10.5% over those in 2018. In 2018, there were 124 deaths; in 2019 the number rose to 137.
Manatees, the state’s official marine mammal, are a protected species in Florida. Also known as sea cows, they are aquatic relatives of the elephant. They often have scars from being run over by boat propellers.
For all those reasons, Palm Trail residents continue their quest for lower boat speeds.
“We implore you to take the necessary next step to create and pass an ordinance designating the area between Atlantic and George Bush a No Wake, Slow Speed area,” Walden wrote on Jan. 17 to the commission.
He then wants the commission to send the ordinance to the FWC for its approval.
“And should FWC decide to reject the commonsense approach of Delray Beach, I would recommend that the mayor drive (literally) the issue directly to the governor’s office to be appealed and overridden as shortsighted, archaic and out of touch with the realities of 2020.”
Mayor Petrolia agrees about the importance of considering rising tides in the boat speed limits.
“It’s a difficult situation that needs to be looked at. Rising tides should be included when determining boating speeds,” she said Jan. 19.
“We may need to pass it through our sustainability officer and then through the new resilience officer in the governor’s office.”