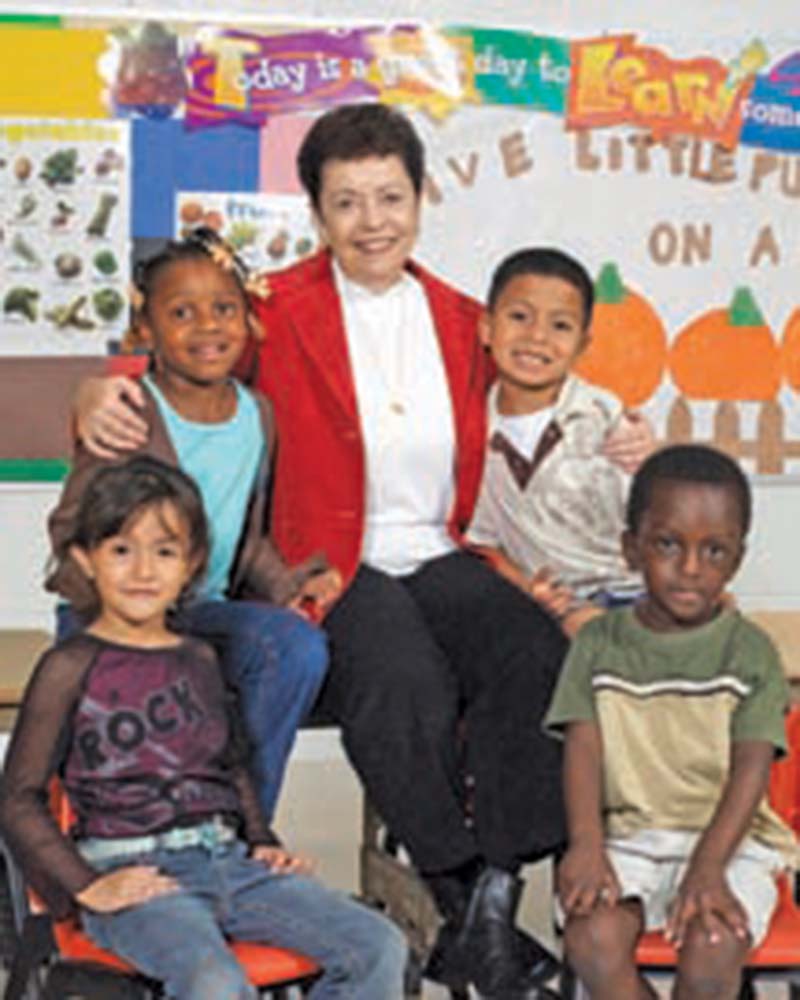 Nancy Hurd was a teacher at the start and then the CEO. She retired in 2013. Photo provided

In 1969, a moon landing, a raucous music festival near Woodstock, New York, and the Vietnam War dominated the news. Tucked into South Florida newspapers that fall: mention of a “pilot project” in Delray Beach to educate children of working parents who could not otherwise afford preschool.
The program set out to cap parent fees at $2 a week and relied on community donations to keep the doors open, recalled Nancy Hurd. She was hired as a teacher and social worker fresh out of Michigan State University in that founding year for $100 a week.
“I remember watching Neil Armstrong come down the ladder to the surface of the moon and thinking, ‘What a time to be alive,’ ” Hurd said.
While it was exciting to help launch a project, she didn’t quite imagine she would become its CEO and work there until she retired in 2013, she said.
But what would eventually become known as the Achievement Centers for Children and Families had a way of grabbing people. It pulled them into its orbit.
It celebrates a 50th anniversary in 2019 with a legacy built on thousands of individual stories. Teachers. Donors. Volunteers. Parents. And students like Wendy Fleuridor, now 33.
“It’s really the reason I am who I am and do what I do,” Fleuridor said.
By her own account, she went from being a kid at risk of falling behind right out of the educational starting gate to a track standout and cheerleader and honor student. She graduated from Florida State University and then took an advanced degree in physical therapy, the field that employs her now.
At her house, “there were times when the lights were cut off. The water was cut off.”
Her parents came from Haiti. They spoke Creole and “couldn’t really help me with homework,” she said.
Both parents worked, sometimes more than one job at a time in hotel maintenance, restaurants or botanical nurseries.
At 3 years old, she entered a place that offered not just an introduction to subjects such as reading, writing and math but, as she saw it, fun. She wanted to go. The kids got meals. They played music and games. Gifts materialized on occasions like birthdays and Christmas.
“It’s where I learned English,” Fleuridor said. 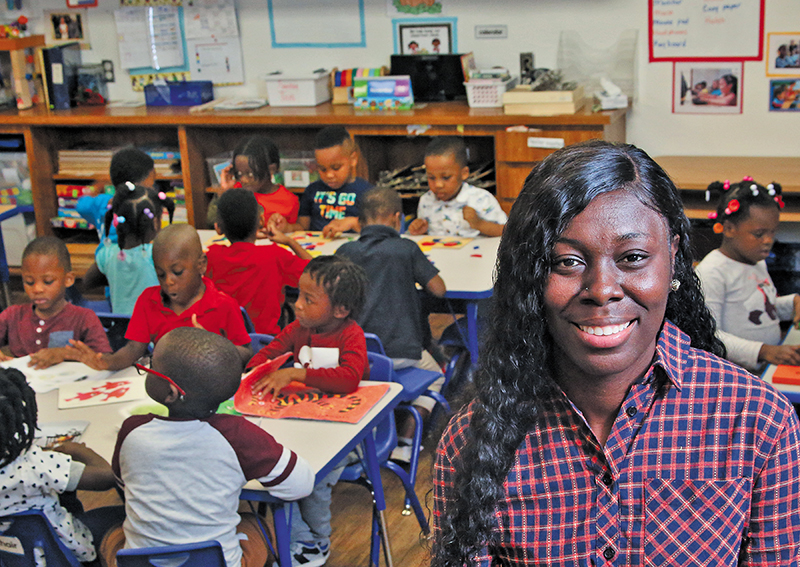 Wendy Fleuridor was a student at age 3 and now belongs to the parents board. Tim Stepien/The Coastal Star

Like those of many other people associated with the Achievement Centers, hers is a multigenerational story. She serves on the parents board, and her son Diyari, 5, recently graduated from the preschool program. He even gave a talk about Benjamin Banneker, the African-American author, surveyor and naturalist, she said.
“He gave a speech and shockingly, he knew it,” Fleuridor said. “He really blossomed by coming here.”
Today Achievement Centers serves about 900 children annually at three Delray Beach locations: the main Nancy K. Hurd Campus at 555 NW Fourth St., plus programs at Village Academy and Pine Grove Elementary.
The nonprofit organization runs toddler, preschool and after-school programs, teen and summer camps, and initiatives that help families connect with resources to help them manage budgets and build stability.
It regularly draws top-tier accreditation scores, and its foundation maintains a four-star or highest rating from Charity Navigator.
It serves 243,000 free meals a year.
CEO Stephanie Seibel credits “the entire Achievement Centers community — from the people that work here, to the children that play here, the people that make this place run behind the scenes, the boards that govern, the parents and families that entrust us, the teens that keep things lively, our donors that support us, our volunteers — all of them.  It’s truly a special place.”
One of those volunteers is Michael Katz, 64. He said he retired from a career in the retail business among other ventures and wanted to do something meaningful.
He said he realized he was no trained educator when he started, and tried to take his cues from the teachers and the students themselves.
When learning letters of the alphabet, for example, some kids responded well when working in pairs and competing to see who could get the right answer first, Katz discovered. They made it a game.
“For these kids it means the world,” he said. “It gives them a foundation. It gives them confidence. When they go to kindergarten they feel like ‘I can do this.’ I’m proud to be volunteering and have a connection to it.”
Tanise Cox, the senior director of out-of-school operations, said, “It’s a good feeling to have parents and students come back to share stories and tell us how they appreciate what we did.”
Ninety-eight percent of Achievement Centers’ early-learning graduates who attended at least 70% of the time meet or exceed kindergarten readiness as measured by the Bracken School Readiness Assessment, officials say. Nearly a quarter are rated advanced or very advanced.
That kind of performance helped win trust and accreditation at a host of agencies. These days, about half of the group’s $4.5 million annual budget comes from government grants and programs such as Head Start, Seibel said. The rest comes from parent fees and private fundraising. Achievement Centers is the lead beneficiary of a charity poker tournament at the Boca Raton Resort & Club that raised $1.6 million in November, for example.

Modest beginnings
But before Achievement Centers became “a homegrown program at the top of its game,” Hurd said, its future was anything but obvious.
“There was no road map when we started,” Hurd said, with no mandatory kindergarten in Florida and few regulations for preschool education. “This was a cottage industry run largely in churches and people’s homes. We started out very modest, very small.” 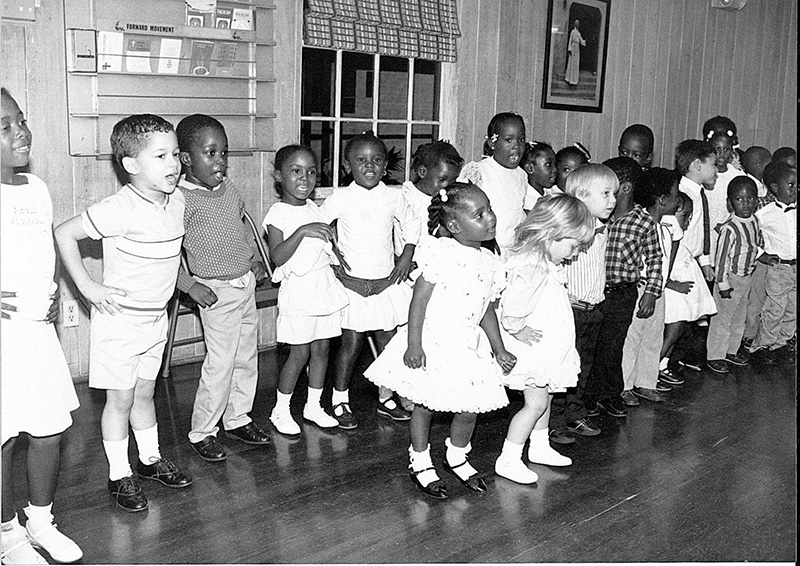 ABOVE: Children danced at a holiday party in 1974 at one of the churches that hosted programs in the early years. BELOW: Groundbreaking at the current Achievement Centers site in 1985. Photos provided 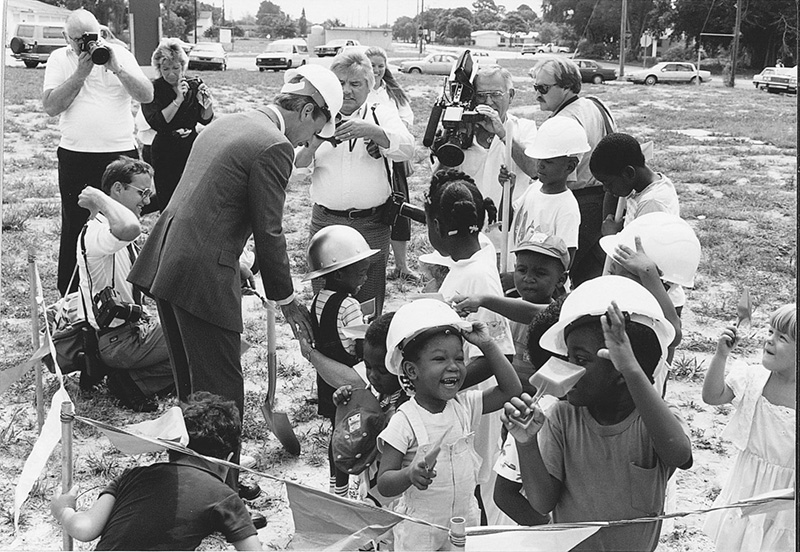 Founded as Community Child Care Center of Delray Beach, it welcomed an initial batch of 20 students in donated Sunday school classrooms, soon to be followed by another group at a second church.
Over time, the scope expanded to older children in after-school programs, which included computer education, music, dance, art, homework assistance, hands-on science experiments and learning African drums.
“We formed our own drum line and the older children got really good,” Hurd said. “They livened up many a parade and fundraiser.”
Another activity gave instruction in meditation and calming skills.
“We really tried to stay on the cutting edge with everything that made learning a joy,” Hurd said.
By 1974, host churches were rebuilding and reorganizing and could no longer house the enterprise. Some residents expressed concerns about a proposed move to a house at 215 SE First Ave. on the grounds the center would bring too much traffic and noise. Initially the plan was denied by a city planning and zoning board. A sympathetic City Commission finally approved the project.
Eventually, the support of key members of the business community and elected leaders paved the way for the construction of a complex on Northwest Fourth Street.
“It’s a legacy for this city,” Hurd said. “It’s certainly to their credit they supported us when we didn’t have two nickels to rub together.”
One goal that has not changed is keeping parent fees affordable.
Achievement Centers officials say they provide a scholarship rate for toddlers and preschoolers at $70 per week and $30 per week for after-school.
Families that qualify for what are termed government scholarships may pay as little as $5 per week. Head Start families pay nothing, officials said.
That’s a far cry from what commercial providers charge, making it possible for mothers in particular to adapt to big changes in the American economy.
In 1969, women made up 37.8% of the workforce, according the U.S. Department of Labor. Five decades later, it is just under 48%.
Unemployment levels have been running below 4% in Palm Beach County, well within what economists typically consider “full employment.” That suggests the economy is not only absorbing those workers in its stride but in fact relying on them to function at full steam.
“As people began to see how successful it was, I would tell potential donors the parents now are taxpayers and not tax-drainers,” Hurd said. “They’re working one and sometimes two jobs. Our children are now going into school ahead of the curve instead of behind. And we keep them there.”
Sometimes moon shots work out. Fleuridor, the former student and now a working mother, needs little convincing that Achievement Centers proved to be a success story and a source of pride in her hometown.
“I’m very grateful,” she said.