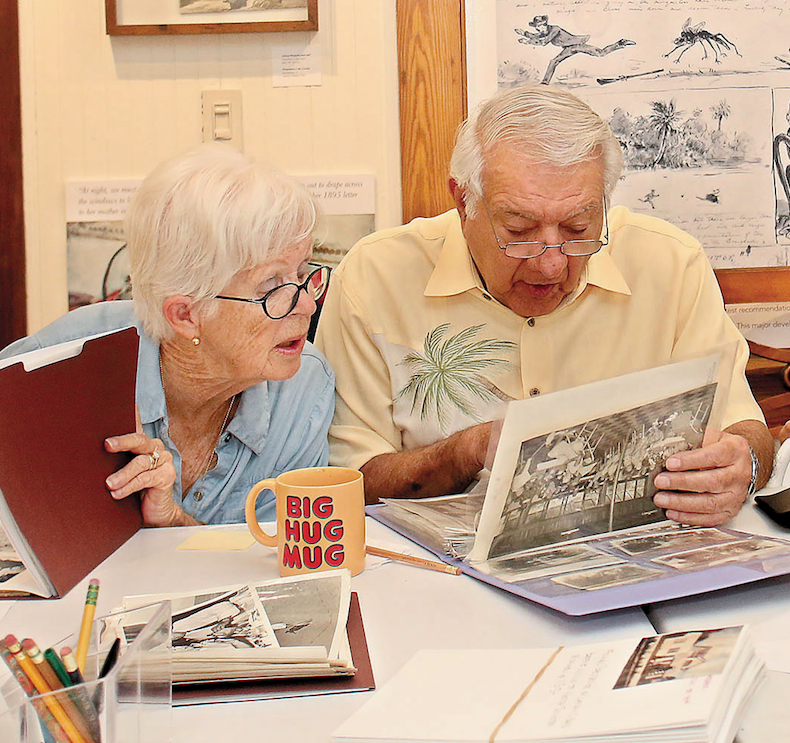 Lonnie Cook Jr. was born here in 1932, and except for a few years in Cleveland back in the 1950s, he lived all his 80 years in Delray Beach.
He owned Hand’s Office Supply store for nearly 50 of those years, and he was a founding member of the Delray Beach Historical Society.
When Lonnie Cook died on May 2, 2012, he took a lot of Delray Beach memories with him.
But he left a lot behind, too — enough to fill two big boxes with photographs and yellowed newspaper clippings.
In November, Mary Ellen Cook delivered those boxes to Kate Teves, archivist at the historical society her late husband had helped to establish.
“Go through them,” she told Teves, “and take what you want.”
The archivist began exploring the artifacts.
“I know most of the main families and the oldest photos,” Teves recalled, “but some I couldn’t identify.”
We should go through all this with people who grew up here, Teves thought. People, say, 79 and older.
And so, on the first Monday in January, Mary Ellen Cook and a few old friends gathered around a table in the society’s Ethel Sterling Williams Learning Center and got to work.
The photographs brought back memories, the memories brought back stories, and the stories brought back Delray Beach of decades past.
The group met again in February; by March it had grown to a dozen or more, and the Wise Elder Circle was born.
“These people know Delray Beach backwards and forwards,” Teves said. “It’s important work, and we just love eavesdropping as they tell their stories.”
Let’s eavesdrop.
On this Monday morning in March, a plate of raisin bread and cheese has been set out, along with a pitcher of tea and boxes of black and white photographs.
Squinting into a magnifying glass, Roy Simon, 87, is scrutinizing a Delray High School reunion from the 1960s, pad and pencil by his side. Of 23 men and women in the photo, he’s identified five so far.
“I think that’s me,” says Wanda Machek, 79, who was born on Southwest Seventh Avenue. “But it’s the ugliest dress.”
She takes up another photo.
“Know who that is? That’s Vera-Ellen. She was a very popular movie star back then. She probably came for the Gladioli Festival.”
Simon abandons the high school reunion to admire Vera-Ellen.
“That would be … ’48 … ’49. Maybe the 1950s,” he decides, and they both pause a moment to remember the lovely Vera-Ellen.
She starred with Bing Crosby in White Christmas and danced with Gene Kelly in On The Town. But how many remember Vera-Ellen today?
Time flies, and fame is fleeting.
“Hey, Jerry, what kind of fish are these?”
Another photo is tossed across the table to Jerry Kern, 81, who was teased for being a Yankee when he arrived here as a teenager in 1948.
The photo, taken on Dec. 9, 1956, has caught Capt. Bill Keane on the Boynton Inlet Dock, posing before a massive catch.
“That’s kingfish and mackerel and dolphin,” Kern says, and pencils this information on the back. 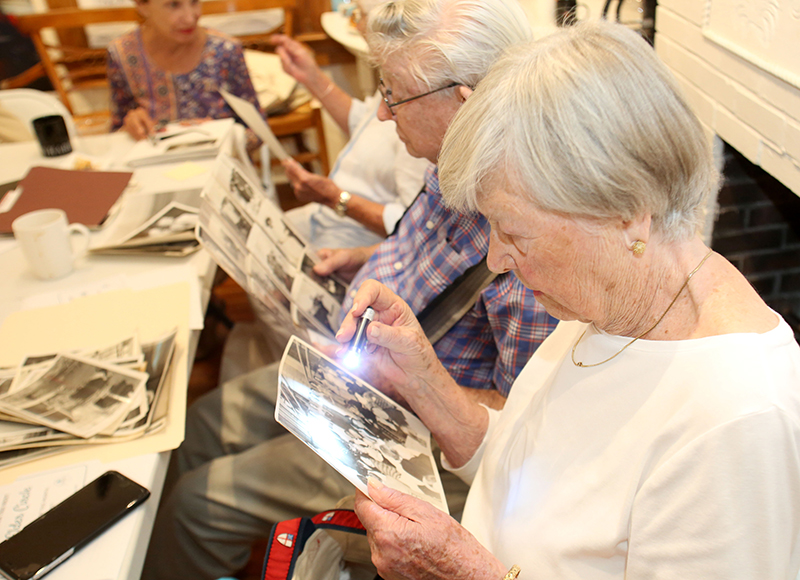 ABOVE: Betty Diggans uses a flashlight to take a close look at an old image during a meeting of the Wise Elder Circle at the Delray Beach Historical Society. The group’s main task is to identify the people in the photos. BELOW: An invitation to the circle’s next meeting. Apparently, photos from the Delray Beach Gladioli Festival are plentiful. Mary Ellen Cook has found a smiling Gladioli Queen from 1952.
“Shirley Craig was around that year,” she recalls, “but it might be Dorothy Steiner.”
Yes, that’s Dorothy Steiner. Cook herself was in the pageant. “Oh, but I was just a contender,” she says, modestly. “We waved from the float. But we had fun.”
Roy Simon is making progress in his quest to name all 23 attendees at that long-ago high school reunion.
“Dorothy Steiner was Miss Florida in 1956,” he says, “and third runner-up in the Miss America contest that year.”
He frowns. “Or it might have been ’57.”
He’s close. It was 1957, but Dorothy Steiner was the fourth runner-up.
The morning’s work is going nicely now, names are being matched with faces as archivist Teves moves around the table, eavesdropping and taking notes.
“This is about communicating with the community and the people who grew up here,” she says. “The town has changed so much and so quickly, but history is never finished.”
And then Zicky Simon, Roy’s cousin, arrives.
Zicky is 94, and in January he finally retired after 61 years from the local Chevrolet dealership where he started work on Jan. 4, 1957. He’s the oldest elder here this morning and may have the sharpest memory.
Scanning the table, he spots Jerry Kern.
“I sold Jerry a new 1963 Chevy Corvette with the $90 Sebring silver option,” he announces.
“I still have it,” Kern calls across the table. “I crank it up every few weeks and it still runs good. The odometer shows 90,000.”
“It cost $5,050,” Zicky remembers.
“Well, I went to the West Palm Beach auto auction out at the fairground five years ago and saw one for $115,000,” Kern adds.
“I made $35 off the sale,” Zicky laughs.
And like a subtle shift in the wind, the memories become stories.
Barbara Kern, 81, born on South Federal Highway in 1937, has found a photo of Jimmy Smith, whose parents owned the jewelry store by the Arcade Tap Room on Atlantic Avenue.
“I had my tonsils taken out over the Arcade Tap Room,” says Kern, Jerry’s wife.
“Dr. Kenneth Davis,” Roy Simon interjects. “Or was Kenneth his son? I only knew him as Dr. Davis.”
One time when he was a boy, Simon recalls, his father was riding a horse on some land out by Hidden Valley Road where they kept about 200 head of cattle and a snake shocked the horse and the reins pulled his father’s finger off.
“Dr. Davis wanted to amputate, but Dad wouldn’t let him, so he sewed it back on in our living room,” Simon said. “That must have been … the 1940s. It was during the war. After a while he got his feeling back in that finger.”
Mention of the war reminds Roy’s cousin Zicky of the time he was sure he saw a German submarine off South Ocean Boulevard.
“I was riding my bike and it was so close, a half-block close to shore,” he exclaims. “They were on the deck having a ball.”
And so the morning slipped toward afternoon. Photographs. Memories. Stories. When the group started to disperse, most of the raisin bread and cheese was still on the plate, but Roy Simon had identified 19 of the 23 young men and women at that Delray High School reunion so long ago.
“This is a good idea,” Zicky Simon said. “The memories come back, you know?”
Betty Diggans, 90, who came in 1947 to take a job at The Colony hotel, agreed.
“It’s just great fun to share memories with old friends,” she said, “and every once in a while we have surprises.”
Suddenly she remembered the time that horse died out on Lone Pine Road.
“Well, they decided to bury it in the lot next door,” Diggans began. “This was in the early 1970s. They drug the horse over and dug a hole, but they miscalculated the depth of the hole, so the horse’s four hooves were sticking up out of the ground. And rigor mortis had set in!”
A sly smile spread across her face and her voice grew softer.
“Well, they had a remedy for that,” she said, “but I won’t tell you how they did it.”
For information about the Wise Elder Council, call the Delray Beach Historical Society at 274-9578 or email Kate Teves at archive@delraybeachhistory.org.