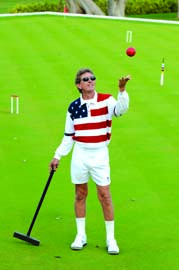 David Bent wants you to know that croquet is more than just a backyard sport. It’s even more than a group of white-clad men and women enjoying a Sunday afternoon on the croquet field.

For Bent, the tennis and croquet professional at St. Andrews Club, just north of Gulf Stream, croquet is as competitive and intense as any other sport. And he has the credentials to prove it.

Bent competed for the U.S. team this past December in the Golf Croquet World Team Championship in Johannesburg, South Africa. The tournament featured eight, four-man teams from around the world. The U.S. team, led by Bent and nine-time U.S. champion Ben Rothman, finished fourth. They had vied against such countries as tournament winner Egypt and Great Britain, where croquet is much more ingrained into the sporting life than in the U.S.

Palm Beach County is one of the places in the U.S. where croquet is popular recreationally and competitively. The National Croquet Center in West Palm Beach will host the U.S. Croquet Association Laws National Championship from April 29 through May 4 — an event in which Bent plans to compete — and PGA National Resort and Spa in Palm Beach Gardens has top-rated croquet facilities.

Bent, who has been tennis professional since 1971, began playing croquet in 1998 when the St. Andrews Club built its 105-foot by 84-foot lawn. He quickly took to croquet thanks to lessons from his friend Archie Peck, a six-time national champion, member of the U.S. Croquet Hall of Fame and a fixture in Palm Beach County croquet circles. Bent had given Peck’s children tennis lessons at St. Andrews Club, so it seemed natural that Peck teach Bent how to play croquet.

“I knew nothing about the sport,” said Bent, who has been ranked as high as second in the U.S. and 30th in the world. “But I like to approach things with an open mind. It was fantastic for me. I was still playing a game outside in the sunshine hitting balls. And it made coming back to tennis much more exciting because if you do anything for a lifetime, it starts to wear on you.”

Approximately 40 people use the croquet lawn at the St. Andrews Club, with the majority playing the golf-croquet format of the sport. Golf croquet, played with six wickets, is easier to learn and play than the nine-wicket format.

“It’s basically the Egyptian set of rules,” Bent said. “If croquet goes anywhere in the U.S. it will be with this set of rules because they’re pretty simple. You still have to use tactics and strategy, but one guy isn’t just sitting.

“The other (nine-wicket) game is just like shooting pool. Once a guy gets a break, you’re going to sit and he’s going to run the table. It’s a much slower-moving game with various shots in it that are difficult to hit.”

In golf croquet, everyone plays, and each turn is just a single stroke. There are no extra strokes rewarded. The game is played individually or in teams of two.

Basically, a player has four options: Try to run through the hoop (or wicket); take a position to clear an opponent’s ball away; block an opponent; or nudge a partner’s ball.

“It’s easy to follow and easy to learn,” Bent said. “I can get you playing croquet immediately with this game, and it’s fun.”