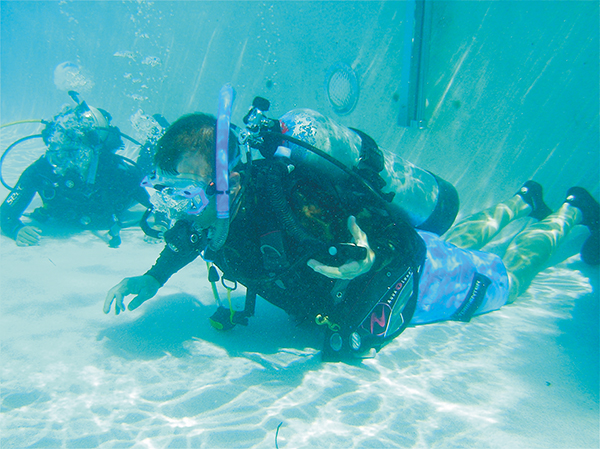 Even if you live near the ocean in South Florida and you’re a certified scuba diver, diving might not be something you do regularly.
I was certified in the late 1970s — but truth be known, I haven’t logged that many dives, especially in recent years.
I wanted to start diving again this summer. But it had been three years since I’d strapped on a scuba tank, so I decided to take an in-the-pool refresher course offered by the Boynton Beach Dive Center.
My pool class cost $99. The dive center also offers a pool refresher class plus two open-water dives for $199.
To begin my training, I lugged my tank and dive gear up the steps to the pool deck at Pompey Park Recreation Center in Delray Beach, where I met instructor Bill Utterback and other students on a hot July afternoon.
I managed to remember how to assemble my tank, buoyancy compensator and regulator.
Once our gear was ready, we filled our buoyancy control devices, or BCDs, high-tech swim bladders that can be inflated using air pressure from the tank. We set our tanks and packs into the pool, where they floated while we donned our masks, snorkels and fins.
Utterback showed us an easy way to slip on fins by crossing a foot over a knee to slip on one fin, then the other.
After entering the pool, we worked our way into our BCD packs, fastened the clips, snugged the shoulder straps and added anti-fog solution to our masks.
We released air from our BCDs and sank below the surface to practice a skill at the heart of scuba diving — buoyancy control.
As instructed, we adjusted the amount of air in our BCDs until we each rose slowly from the bottom when we took a breath, then sank when we exhaled.
Our group practiced several essential skills in the pool, including recovering a lost regulator (the mouthpiece from which a diver draws air), equalizing the pressure in our ears, clearing flooded masks, removing and putting on tank packs underwater and two methods for towing an incapacitated diver through the water.
Utterback taught me a trick I had forgotten or never learned — how to breathe from a free-flowing regulator, or a scuba mouthpiece spewing out air instead of delivering it on demand as it should.
Toward the end of the refresher class, I went to the deep end of the pool with Utterback to practice sharing air with another diver, hovering below the surface during a safety stop and an emergency ascent to the surface.
After the pool class ended, I felt more confident with my re-learned skills and ready to dive in the ocean.
Keeping dive skills fresh is important not only for safety but for the enjoyment of the dive — both for the diver and for those diving around him or her.
Capt. Tony Coulter of Boca Raton, who operates the dive boat Diversity, said it’s painfully obvious when divers show up who haven’t been diving for a while. Their gear might not fit properly, or they often have trouble controlling their buoyancy.
Coulter, who has been working in the dive charter business since the late 1970s, said divers who want to get back in the water after a hiatus should at least hire a dive master to accompany them on a dive to refresh their skills.
The dive training organization PADI offers its divers the online Reactivate program ($59.95) that uses video scenarios to refresh divers’ knowledge.
Divers who complete the online course can add an in-the-water refresher course and receive a replacement certification card with a reactivated date.
PADI says reactivation is not required to maintain a certification card but is recommended for those who haven’t been diving in a while. 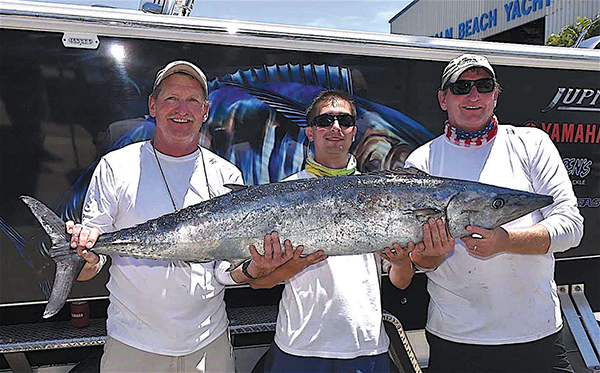 The Lantana-based Bait Me fishing team of Pat Gregorchik, left, his son Ian and his brother Mike hold the 52.9-pound wahoo that won heaviest fish in the June 24 Lake Worth Fishing Tournament based at Palm Beach Yacht Center. Ian Gregorchik caught the wahoo on a spinning rod holding a cedar plug in 350 feet of water north of Boynton Inlet. Photo provided/Leonard Bryant Photography

Lake Worth Fishing Tournament winners
Pat Gregorchik, of Lantana, was fishing with his son Ian and brother Mike in the June 24 Lake Worth Fishing Tournament when something unusual happened.
A strong fish hit a cedar plug while Ian Gregorchik was reeling it in after trolling it behind his family’s 23-foot boat, Bait Me.
After a 10-minute fight in the waters off Lantana Beach, Ian Gregorchik brought to the boat a 52.9-pound wahoo — the heaviest fish of the 58-boat tournament.
Commonly trolled for tuna, the plain-looking cedar plug is not a traditional wahoo lure.
Another outstanding catch in the Lake Worth tournament: Capt. Matt Liskay’s 48.2-pound dolphin (mahi mahi), caught trolling a bonito strip behind a black-and-red skirt in 450 feet off Mar-a-Lago aboard Liskay’s boat, Born-N-Raised.

Surfrider Foundation campaign
Surfer and technology entrepreneur Jeff Max is leading a campaign to help the Surfrider Foundation raise $100,000 by Labor Day.
In a short video on Spotfund (www.spot.fund/surfrider) Max lists threats to the health of the oceans, including global warming, overfishing, plastic pollution and oil drilling.
Donations to Surfrider can be made through the Spotfund site. As of mid July, Max’s campaign had raised slightly more than $5,000.
Founded in 1984, the Surfrider Foundation organizes networks of everyday citizens to promote the preservation and enjoyment of the world’s oceans and beaches.
The San Clemente, Calif.-based nonprofit has 84 chapters, including one in Palm Beach County.

Florida reef survey
NOAA and partners are conducting a survey to better assess the economic importance of Florida’s coral reefs.
Anyone who has been diving or snorkeling in Florida in the past year is being asked to complete the short online survey.
The survey can be found at www.floridareef expendituresurvey.com.


Boating security zones near Mar-a-Lago
The Coast Guard is considering whether to make permanent three boating security zones put in place when President Donald Trump visits Mar-a-Lago, his Palm Beach estate.
The Coast Guard accepted public comments on the plan through July 20. After responding to each comment, the Coast Guard will publish the final rule in the Federal Register.
The three Mar-a-Lago boating security zones used since early 2017 are:
Zone 1: A section of the Lake Worth Lagoon immediately west of Mar-a-Lago extending about halfway across the waterway from the southern tip of Everglades Island to 1,000 yards south of Southern Boulevard. Entry by boat is prohibited.
Zone 2: The western side of the lagoon west of Zone 1. Boaters moving through this zone must maintain a steady speed and not stop (unless they must wait for the drawbridge).
Zone 3: Extends 1,000 yards off the beach from Banyan Road south to Ocean View Road. As in Zone 2, boaters moving through this ocean zone should maintain a steady speed and avoid stopping.
If the boating security zone regulations become permanent, they would apply when Trump, the first lady or anyone else protected by the Secret Service visits Mar-a-Lago.
To read comments on the proposed security zones, go to www.regulations.gov. Search for the document labeled “USCG-2017-0016.”

Tip of the month
Fishing for bottom fish such as snapper and grouper during this summer?
Carry a venting tool that can be used to allow fish to return to deep water after their swim bladders have inflated on the ascent to the surface.
Fish brought up from depths of more than 30 feet often have distended swim bladders, which causes their stomachs to turn inside out and show inside their mouths.
Don’t puncture the distended stomach. Instead, use a venting tool (small, hollow needle) to puncture the fish’s body near the tip of the pectoral fin. After you hear the swim bladder gas escape through the venting needle, gently release the fish.
Small, narrow-bodied fish such as porgies, grunts and many snappers often do better when returned to the water as soon as possible without venting. Find a two-minute video on fish venting at www.flseagrant.org/fisheries/venting/.