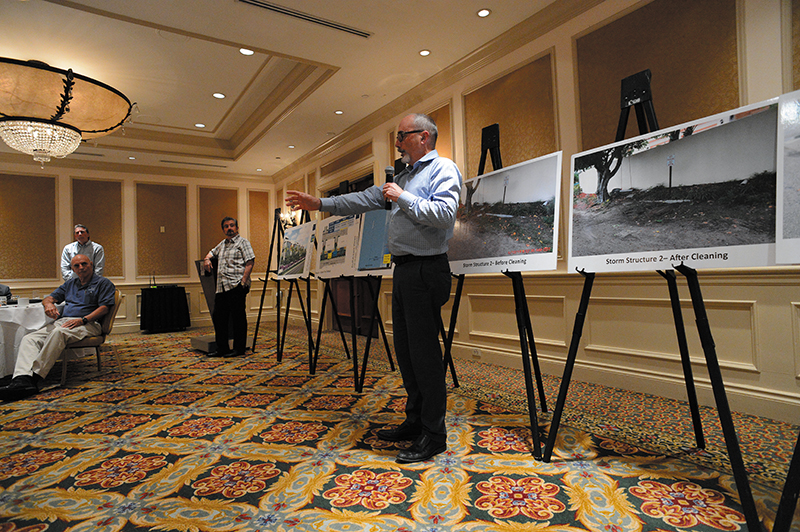 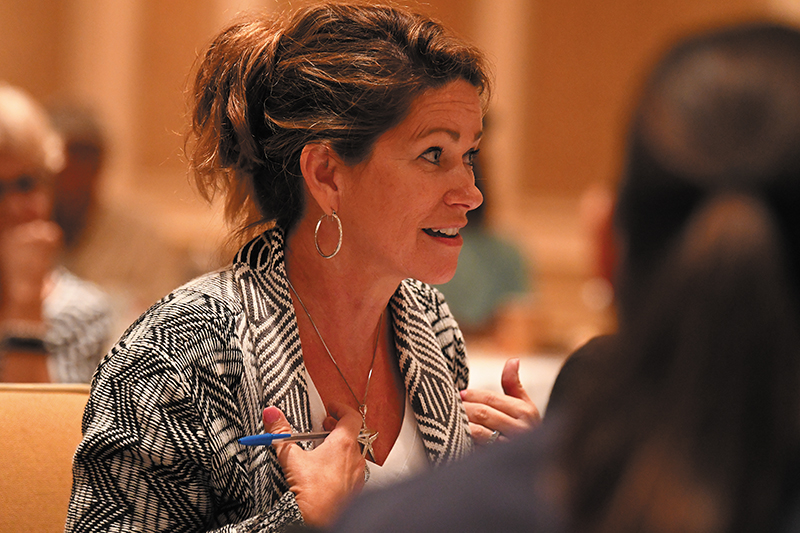 Developers of the Gulf Stream Views townhouse project say they are running out of ideas for allaying the flooding concerns expressed by neighboring residents in Briny Breezes and the County Pocket.
“I don’t know what else we can do,” Michael LaCoursiere, the project engineer, told a group of several dozen homeowners during an often contentious meeting June 17 at the Delray Beach Marriott.
LaCoursiere said the old neighborhoods in Briny and the Pocket need a drainage infrastructure overhaul that is beyond the scope of what New Jersey-based NR Living can offer.
“A major community-wide project is what your community needs,” he said. “They’re doing what they can as developers.”
LaCoursiere said the project is being built to retain on-site the rainwater of a 100-year storm, beyond the permitting standard of a 25-year storm. The developers say they have complied with every requirement Palm Beach County, FEMA and state officials have made.
Marie Chapman, who lives on Winthrop Lane in the Pocket, said she believes the project already has caused drainage problems. Recent heavy rains backed up sewers, she said, and left “shin-deep water” in her yard. Her neighbors echoed similar complaints.
“My house is 80 years old and it never flooded before you guys started construction,” Chapman told the developers. “And we’re just into hurricane season. I’m not sure you’re aware of why we’re so angry.”
Residents say that for decades the dormant 2-acre project site served as a drain field for runoff from Briny Breezes and the Pocket. That ended when construction began.
Chapman said the standing rain water and subsequent sewer problems are raising health issues. “You guys have had a huge impact on our day-to-day lives,” she said.
Kristine de Haseth, executive director of the Florida Coalition for Preservation, said homeowners have had to hire a lawyer and engineer in an effort to protect their property rights.
“These folks are flooding,” de Haseth said. “They’re digging into their pockets to solve a problem they didn’t create.”
Glenn La Mattina, NR Living senior vice president, said developers are willing to consider possible solutions from residents. “We are open to suggestions,” La Mattina said.
LaCoursiere said the developers have cleaned out existing catchment drains outside the site and are considering installing trench drains on the Seaview Avenue swales.
“That’s not a real significant thing,” LaCoursiere said, “but I imagine that in your eyes any drop of water that we save from going down that hill is a benefit to everybody out there.”
La Mattina said developers would back off plans to remove invasive plant species from the sea grapes along the oceanfront after hearing residents complain about potential damage to the dunes.
NR Living organized the meeting to inform residents that the developers would seek a variance from the county to allow construction of 14 7-by-14-foot plunge pools, one behind each unit along the southern and northern property lines. The county’s Planning & Zoning Commission scheduled a hearing on the request for July 3.
Bradley Miller of Boynton Beach, the project’s planner, said developers are asking county building officials to loosen swimming pool setback requirements. If the county rejects the request, Miller said developers will install patios instead.
Developers say the pools were added to the plan as an amenity that would enhance marketing to high-end buyers. Pre-construction prices for the three-bedroom units range from $1.8 million to $2.7 million. The project is scheduled for completion early next year.