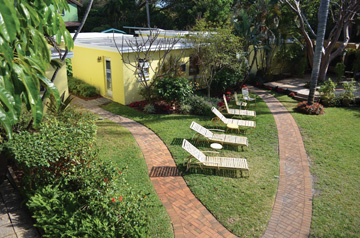 The Beachcomber Family Center for Addiction Recovery resembles an apartment complex or mom-and-pop hotel. Joe and Jim Bryan run the center, founded in 1976 by their father. The spartan rooms are paneled in Dade County pine.
Photos by Jerry Lower

Sometimes they pull into the parking lot, a hidden patch of concrete that can handle about a dozen or so cars, lock up and amble on in.
“Got anything for rent?” they might say.
“People are always stopping here looking for an apartment,” says Joe Bryan.
But the living that goes on at the tiny Beachcomber Family Center for Addiction Recovery just south of Briny Breezes isn’t the kind of easy beachside living you’d want to seek out unless you have to.
Here, tucked into paradise, is a long-established recovery center — small and intimate, yes, but offering the same kind of programs that have been proposed to the south by Caron Treatment Centers, and which are drawing a vocal reaction from neighbors. 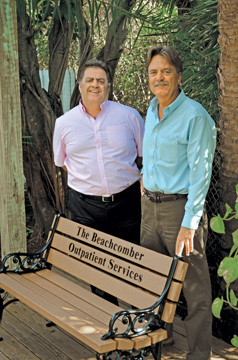 Since 1976, Bryan and his family have been helping addicts on this property through a 28-day recovery program that starts with breakfast at 6 a.m. and lights out at 11:30 p.m.
There are no TVs. Patients don’t have cars or computers, and visitors are kept to a minimum.
“They’re very low-profile,” says Elayne Olinger, who has lived next door for 30 years. “There’s never been any problems at all that I can think of.
“They’re good neighbors.”
The days for his clients, says Bryan, consist of breakfast, a peek at the sunrise, yoga, group meetings, lunch, more group meetings, dinner, another group meeting and perhaps an evening of outdoor games. There’s no pool or tennis court, but there is a small outdoor gym and a shuffleboard court.
From the road, the rehab center looks like an apartment complex or a mom-and-pop hotel.
Rooms are simple, with Dade County pine walls, but the grounds are lush and rather meticulous.
“The most noise here is if they’re outside playing cards or something,” says Bryan, whose dad, James — himself a recovering alcoholic who lost touch with his young children during a spell on Skid Row — opened the Beachcomber in 1976.
“I built the fence mainly to keep people off the property as opposed to keeping people in,” says Bryan, the center’s director.
Situated on a small piece of land about one block from the Atlantic Ocean, the Beachcomber has eight cottages, an office, a meeting center and a main house — where Bryan lives with his wife and four kids, when they’re all home.
He says he has no qualms about his family living there. Reunited with his alcoholic father — by then, sober — when he was about 8 years old, Bryan says he grew up around addicts in a treatment center. His father worked at one.
James Bryan died in 2005, and now Joe Bryan and his brother, Jim, run the center.
By industry standards, the monthlong program at Beachcomber is affordable at roughly $13,900 and is the kind of place accessible to the middle-class, Bryan says. They take insurance, so their patients are often firefighters and schoolteachers, nurses and police officers.
After all, addiction knows no boundaries.
Bryan, who says he came to Florida in 1980 to go fishing with his dad and never left, says through the years they’ve helped nearly 7,000 patients. There are 10 staff members, five of them licensed therapists, and two workers are always on site at night, he said.
While the Beachcomber is small and inauspicious, Bryan knows that the public reaction to recovery centers can be harsh. He has not talked to the proponents from the Caron Treatment Centers; actually, Caron is where his father worked for many years before opening the Beachcomber. But he knows those unfamiliar with treatment and recovery are often frightened by the notion of even visiting a center.
“These people are just like everyone else,” he says, simply.
Bryan says he understands people’s timidness about the recovery process, but he also says good centers can make for good neighbors.
The nearby rental properties, he said, have attracted more police calls than the Beachcomber ever has — something longtime neighbor Olinger also said was the case.
Says Bryan: “Most people don’t even know we’re here.” 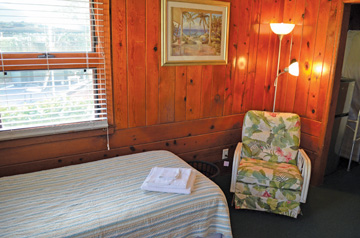