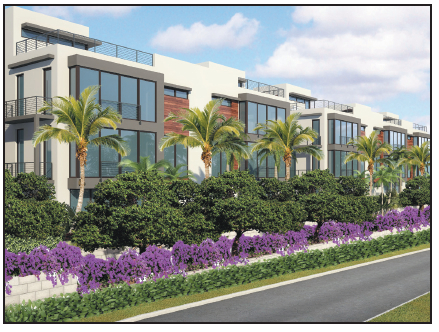 Construction should begin by mid-September on the oceanfront Gulf Stream Views, a townhouse development in a lot that formerly held the Pelican Beach apartments.

The new landowner last month showed off plans for a posh complex south of Briny Breezes in response to a list of questions from Kristine de Haseth, executive director of the Florida Coalition for Preservation, on behalf of residents of the County Pocket and Briny Breezes and The Coastal Star.

Glenn La Mattina, senior vice president of NR Living, gathered the project experts on Aug. 20 at a Boynton Beach waterfront restaurant in an effort to address the concerns.

Density: According to the project’s architect, Richard Jones of Delray Beach, the six buildings, with a total of 14 units, will have a modern design featuring a lot of glass.

“All of the units will have ocean views from one or more levels,” he said.

The complex will be framed by retaining walls with heavy landscaping that Jones described as “providing a terraced contemporary greenscape along the street.”

Elevation: The complex sits within the state’s Coastal Construction Control Line. As a result, the project’s first floor will be at 16.4 feet, said land planner Bradley Miller of Boynton Beach. The state requires a first floor start at 14 feet above NAVD (the North American Vertical Datum).

Gulf Stream Views will add an additional 2 feet for the pilings and other foundation work. This will put the 1st floor about 2 feet above the level of Old Ocean Blvd.

Each unit will have a two-car garage, according to Miller. The site also will have 10 surface spaces for guest parking.

Public beach access: The beach will continue to be open to the north and south of the complex, Miller said. Gulf Stream Views residents and their guests will have private access through a gated entrance in the middle of Old Ocean.

Each unit will have its own wastewater pipe that flows to one lift station at the southwest corner of the complex. From there, the wastewater will be pumped to a 6-inch pipe under Seaview Avenue on the southern border of the property. That pipe eventually connects to the South Central Regional Wastewater Treatment Plant on the mainland.

Drainage: Stormwater runoff will be dealt with on-site, LaCoursiere said. It will be discharged into the ground and not flow off-site into the County Pocket to the south, he said.

“We will move the existing sabal palms to the east side of the property,” Urban said. Coconut palms will be planted near the buildings to avoid storm damage from shade trees.

In between the tiered retaining walls, purple bougainvillea will be planted, Urban said. “It will bring some color to the complex and serve as a barrier [to possible intruders],” he said.

Rich Radici, the construction manager from New Jersey, said workers would park on-site during construction. Radici has a Boynton Beach condo and says he will be down often to check on the project.

During construction, Karl Indivero will be the on-site manager daily.

Radici said the project would take about 18 months to complete.

Each three-story unit will have three bedrooms, an elevator, a splash pool, a two-car garage, a rooftop deck and 3,400 square feet of air-conditioned space. Preconstruction prices range from $1.8 million to $2.7 million.

The Coalition for Preservation is a grassroots group dedicated to preserving the quality of life on the barrier island with responsible growth.

The project sits on a nearly 2-acre vacant parcel in an unincorporated county pocket. Gulf Stream Views LLC paid $5.4 million for the property in early June.

The company, a division of National Realty Investment Advisors of Secaucus, N.J., purchased the land from real estate investor David Rinker. He and other investors bought the parcel in 2006 when it housed the Pelican apartments.

Realtors Pascal Liguori and his son Antonio of Delray Beach have the exclusive sales listings for the Gulf Stream Views townhomes.