George de Mohrenschildt relaxes with a dog in this undated photograph. Photos provided

“What sort of day was it? A day like all days, filled with those events that alter and illuminate our times … and you were there.”
Although the original version of You Are There was last broadcast in 1958, many viewers still remember the memorable sign-off that first made Walter Cronkite a household favorite. Had the show continued for another two decades, Cronkite might have begun an episode like this:
“We take you now to March 29, 1977, to the usually placid Florida beachside hamlet of Manalapan … home to the Vanderbilts … where a mysterious death has renewed interest in the assassination of President John F. Kennedy. … We go now to our correspondent, Bill O’Reilly. Bill … Bill … Are you there? … Were you there? … It seems we are having some technical difficulties …”
The dead man was George de Mohrenschildt, 65, a Russia-born geologist. He had been visiting his daughter, Alexandra, who was staying with Nancy Tilton, an old family friend. Tilton’s grandparents Romeyn and Leila Pierson were early developers on the island. They gave it the name Manalapan Estates.
Tilton, who was not married, kept a 20-gauge double barrel shotgun in her upstairs bedroom, a box of shells in the nightstand by her bed. Investigators for Sheriff Richard Wille and the county medical examiner both concluded de Mohrenschildt had taken the gun to an alcove off his second-floor bedroom, placed his mouth over the muzzle and fired one round. Returning from shopping a few minutes later, Alexandra found his body slumped in a chair.
Investigators were able to pinpoint the time of death at 2:21 p.m., because the housekeeper had placed a tape recorder next to the television set to record afternoon soap operas for Tilton. The tape also recorded the shotgun blast, although none of the five people who worked in and around the house heard it or noticed anything or anyone unusual.
But wait, a sixth person claims he was there and heard the fateful shot:
“As the reporter knocked on the door of de Mohrenschildt’s daughter’s home, he heard the shotgun blast that marked the suicide of the Russian, assuring that his relationship with Lee Harvey Oswald would never be fully understood.
“By the way, that reporter’s name is Bill O’Reilly.”
But O’Reilly, famous for the “No Spin Zone,” didn’t make this claim until 2012, when his book Killing Kennedy was published. 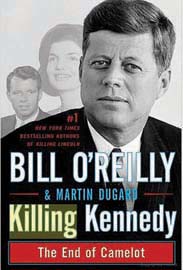 In 1977, O’Reilly, then an ambitious 27-year-old TV newsman at WFAA in Dallas, had been digging. He knew de Mohrenschildt was worried about enemies, real or imagined. He knew about his cooperation with the CIA. He knew he might be onto to the story of the century. He and another WFAA reporter did come to Florida hoping to contact de Mohrenschildt.
But if he was at the Manalapan house at 2:21, why didn’t he stick around? Why didn’t he call the cops later, especially when conspiracy buffs began to speculate that de Mohrenschildt had been murdered?
Why didn’t he mention it to colleagues? Ever.
How did no one else at the house — the gardener, the maid, the cook, or the two women decorating a loft in the boathouse — not see him or anyone else?
A few Kennedy assassination buffs took note of O’Reilly’s claim when Killing Kennedy first came out, but their inquiries to O’Reilly received no response.
When NBC shelved Brian Williams, however, for embellishing his involvement in the Iraq war, O’Reilly jumped in. Recalling Howard Beale, the iconoclastic newscaster in the movie Network, he urged his faithful legions to “open that proverbial Network window and yell out, ‘We’re mad as hell and we’re not gonna take it anymore.’ ”
Oops. Fox News isn’t yelling from any windows and is sticking by its favorite son, despite other questionable reporting:
In 2009, recalling his work for CBS during the 1982 war between Britain and Argentina over the Falkland Islands, O’Reilly claimed to be in a “war zone.” His cameraman struck his head on the pavement as protesters ran from charging Argentinian police. But they were in Buenos Aires, hundreds of miles from the war zone. In fact, no American journalists were allowed in the Falklands.
“I’ve seen guys gun down nuns in El Salvador.” Not quite. He wasn’t in El Salvador when the nuns were murdered. He later acknowledged he watched filmed footage of the incident.
After graduating from Marist College in New York, O’Reilly taught history and English for two years at Monsignor Pace High School in Miami, then earned a master’s in broadcast journalism at Boston University. Howard Stern was a classmate. He took his first TV job as a reporter, anchor and weatherman in Scranton, Pa., then moved to Dallas where he began pursuing the de Mohrenschildt story.

The Oswald connection
A larger-than-life character who had some dealings with the CIA, de Mohrenschildt had met Lee Harvey Oswald and his Russian wife, Marina, socially in Texas in the summer of 1962. A few months later, he helped Oswald find a job with a Dallas photography company. He once visited Oswald’s home, where he said Oswald showed him the rifle he would later use on Nov. 22. But in the summer of 1963, with a contract to set up an industrial enterprise, he left for Haiti. He never saw Oswald again.
After the assassination, de Mohrenschildt testified before the Warren Commission and in 1967 was interviewed by New Orleans District Attorney Jim Garrison, who was prosecuting businessman Clay Shaw on charges of conspiring to assassinate President Kennedy, with the help of Oswald and others. Shaw was acquitted.
In the next few years, de Mohrenschildt’s life took a downward turn. He turned to a fellow oilman, family acquaintance and former prep school roommate of his nephew: CIA Director George H.W. Bush. In his handwritten letter to Bush in September 1976, de Mohrenschildt complained that his phone was bugged, he was surrounded by “vigilantes,” he was being followed; perhaps the FBI was involved.
“I can only speculate that you may have become ‘newsworthy’ again in view of the renewed interest in the Kennedy assassination,” Bush wrote back. He added that he understood de Mohrenschildt’s concerns but could find no evidence of federal interest.         Two months later, citing four previous suicide attempts, de Mohrenschildt’s wife had him committed to a Texas mental institution. Her affidavit said he was depressed, heard voices, saw visions and believed the CIA and the “Jewish Mafia” were persecuting him. At the end of 1976 he was released.
A Dutch journalist, Willem Oltmans, made contact and took de Mohrenschildt back to Europe, but he soon disappeared. On March 16, 1977, he flew to New York and was picked up the next day at the West Palm Beach bus station by Nancy Tilton. At her oceanfront home in Manalapan, he was  reunited with his daughter Alexandra. He took solitary walks on the beach and read in his bedroom. Later, Alexandra would say that he was still suicidal.
Enter Edward Jay Epstein, a freelance writer. For $4,000 and use of a rental car, de Mohrenschildt agreed to be interviewed for a Reader’s Digest article about Kennedy’s assassination. They met briefly on March 28 in Epstein’s room at The Breakers and began the interview the next morning. While he was at The Breakers, his daughter answered the door in Manalapan: Gaeton Fonzi, an investigator for the House Committee on Assassinations, asked to speak with her father. Hearing that he was not there, Fonzi gave her his card, saying he would return in the afternoon.
At The Breakers, de Mohrenschildt agreed to return at 3 p.m. to continue the interview and returned to Manalapan for lunch. When Alexandra gave him Fonzi’s card, he became upset and went  upstairs to his room. Alexandra went shopping. Returning at 2:35, she discovered his body.
News traveled quickly. Fonzi said he received a call that evening from O’Reilly asking if the reports of de Mohrenschildt’s death were true and saying that he would be there the next day. 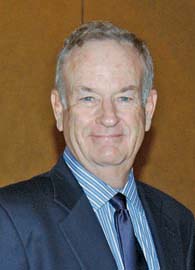 Perhaps O’Reilly was just being sly. He was already in the area with fellow WFAA colleague, Bob Sirkin, who recently jumped to O’Reilly’s defense. They had learned from Fonzi that de Mohrenschildt was being interviewed at The Breakers. With Frank Eberling (misidentified in Sirkin’s report as Everly), they knocked on the door of Epstein’s suite. Sirkin said he “could clearly see de Mohrenschildt sitting in the background.” A “furious” Epstein slammed the door and called security who escorted the trio off the property.
In a report by the website Media Matters, published March 10, Eberling said he was working his regular job at WPEC-Ch. 12 on March 29 and didn’t travel to The Breakers with O’Reilly and Sirkin until the next day. Eberling had no knowledge about O’Reilly hearing the gunshot. “That’s something I would have remembered and I don’t remember him saying that,” Eberling said.

Eyewitnesses? Tilton died in 1994. Alexandra has faded into oblivion. The original house was demolished in 2000, replaced by a modern estate home. No one to talk to, no house to gape at.
And that’s the way it was … until O’Reilly wrote the book.