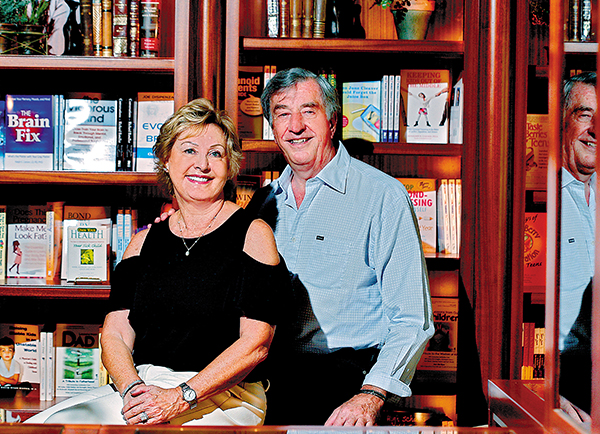 If Anne and Peter Vegso’s last name sounds vaguely familiar, it may be because it can be found on a sprinkling of buildings throughout the area.
There’s the Vegso Community Resource Center in Boca Raton; Casa Vegso, a shelter and transitional housing center for victims of domestic abuse; and the Vegso Family Arena at the Equine-Assisted Therapies of South Florida facilities in Coconut Creek.
While their name might ring a bell, Anne and Peter Vegso tend to fly under the radar when it comes to the big names in South Florida philanthropy — and that’s just fine with them.
“We don’t need to see our name on a building,” Anne Vegso says. “We don’t need people to know who we give to. We just want to know that we improved someone’s life, and if it’s a woman or a child it’s so much better.”
This month, the Vegsos will help raise money for one of their favorite causes —  women and children — by having their successful book-publishing company, Health Communications Inc., serve as presenting sponsor of the 18th annual Women of Grace Luncheon on Nov. 9 at the Boca Raton Resort and Club.
The event, expected to include 650 guests this year, raises money for the Center for Women and Children at Bethesda Health, addressing a different specific need each year.
This year, money raised will be used to purchase a state-of-the-art, realistic mother-and-baby birthing simulator for training both staff and parents.
For the Vegsos, who will bring in as speakers the authors of Oola for Women, Find Balance in an Unbalanced World (and who will provide each guest with a copy of the book), the Women of Grace Luncheon is a perfect match for their philanthropic philosophy.
They became familiar with the event after Anne was recognized as a Woman of Grace in 2014 for her work with Delray Beach-based AVDA, Aid to Victims of Domestic Abuse.
“We like the idea of supporting local nonprofit organizations that need a specific amount of money for a specific purpose,” Anne Vegso says.
Adds Peter Vegso: “When you give to local organizations, you have a better understanding of where the money is going.”
While they support a variety of causes, the focus of the Vegsos’ giving through their family foundation is on organizations that help women and children.
“It’s just something that my heart is close to,” Anne says.
In addition to supporting the luncheon, which each year recognizes five women doing outstanding work in the community, the Vegsos have supported the renovation of the maternity, labor and delivery areas at Boca Raton Regional Hospital.
They also support Equine-Assisted Therapies of South Florida, a therapeutic riding program for children and adults with special needs. Their business warehouse is used as the storage and distribution area for the Junior League of Boca Raton’s diaper bank, and their foundation supports Boca Ballet’s First Step program, which introduces ballet to at-risk children.
“Anne and Peter have always been doing great work in the community, but they do it in a very low-key way,” says Kimberley Trombly-Burmeister, this year’s chairwoman of the Women of Grace Luncheon. “They are fabulous philanthropic leaders in our community.”
Peter Vegso, 73, grew up outside Montreal while Anne, 69, was born in England and moved to Canada with her family when she was 18. They met at a party in Toronto that Anne went to only because her sister didn’t want to go alone. It was there that she caught Peter’s eye.
“I saw her and said, ‘That’s it,’ ” Peter Vegso said.
The Vegsos were together while Peter and partners built a small business that started out printing a weekly newspaper and information pamphlets about addiction. It evolved into a multimillion-dollar book business that has published thousands of titles — mostly in the health, self-help and inspirational areas — and now Health Communications has about 65 employees.
The couple, who live in Boca Raton, have been married for 46 years and have two daughters and five grandsons, some of whom are already learning about the importance of philanthropy.
Before making a donation to an organization in the names of her two oldest grandsons, Anne Vegso asked them what causes they would like to support. One chose Save the Turtles and the other The Caring Kitchen.
“It’s important for them to recognize that they are extremely blessed,” she said.