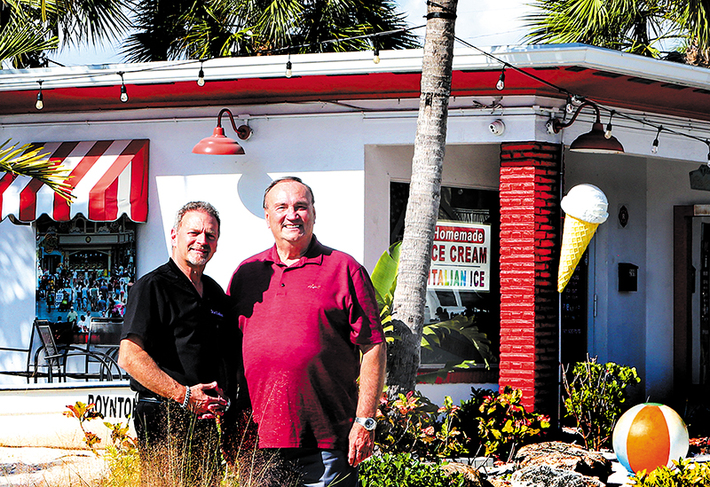 On the morning of Friday, Oct. 28, an Ocean Ridge podiatrist and the owner of a Boynton Beach ice cream shop set out together on a mission of mercy.
Neither ice cream nor feet were involved.
What Dr. Ian Goldbaum and his friend Joseph Hurtuk have in common is aviation.
Goldbaum, 65, who owns a Piper PA-28 Cherokee, earned his pilot’s license in 2021. Hurtuk, 77, has been flying a Cessna 172 since 1996.
Two years ago Hurtuk had a little problem with his heel, which made them doctor and patient, but airplanes made them friends and, on that October morning, missionaries of mercy.
They flew out of the Lantana airport at 7 a.m. in Goldbaum’s Cherokee and touched down again about 4 p.m.
In the hours between, they landed at the Plant City airport in Hillsborough County, loaded the plane with paper towels and toilet paper, mac ’n’ cheese and ramen noodles, and took off for Fort Myers.
Their work was not the only aerial mission to survivors of Hurricane Ian that day.
Goldbaum had learned on a YouTube channel about a project called Jimmy’s World, popular with Florida aviators. Money was being collected to buy supplies at Costco and pilots were needed to fly the supplies from Plant City to Fort Myers.
Hurricane Ian was the bad Ian, Goldbaum thought. I’m going to be the good Ian.
He called his friend.
“Hey, Joe, are you making ice cream on Friday, Oct. 28?”

Different paths
The journeys that brought Goldbaum and Hurtuk to that day’s journey couldn’t have been more different.
Raised in suburban Detroit, Goldbaum has practiced podiatry in Delray Beach for 37 years.
“My family owned a couple of hospitals in Michigan, so I knew I was going to go into medicine,” he says, “but I didn’t know what branch. Then one day when I was a student at Michigan State I went to visit a roommate’s father’s office. He was a podiatrist and that settled it.
“I became a doctor because I wanted to help people. I felt it was a calling.”
Joe Hurtuk’s work history did not scream ice cream.
He had been a fireman in the U.S. Air Force, a police captain at the Port Authority of New York and New Jersey, and the chief of police operations for the Metro Washington D.C. Airport Authority, where in 1992 he created the Dulles Day Plane Pull.
Teams of 25 pay $2,000 to take turns pulling an 82-ton plane 12 feet. Fastest time wins and the money goes to the Special Olympics.
In 2015, Hurtuk retired as the chief of regulatory compliance for the Department of Homeland Security at Palm Beach International Airport.
And wondered what to do next.
“I decided I wanted to either run a car wash or open an ice cream shop,” he says, “and I thought, are you ever really happy after a car wash?”
He leased a building at 209 N. Federal Highway and opened the Boardwalk Italian Ice & Creamery, the name inspired by childhood memories of ice cream treats on the Jersey shore.
“Everybody told us we weren’t going to make it,” recalls Hurtuk, who lives in Delray Beach.
Seven years later the shop offers about 150 flavors — not all at once — and boasts a 4.6 rating on Google reviews.

Serving survivors
Now the two friends would leave podiatry and ice cream behind for a day to serve survivors of the late-September hurricane instead.
They arrived in Plant City as one of 11 planes ready to load the $50,000 in supplies Jimmy’s World had collected.
“We took out the backseats and filled the plane,” Goldbaum said. But they never made it to Fort Myers.
“All the planes were diverted to Punta Gorda,” Hurtuk explained. “We never learned why, but I assume the Fort Myers airport was either damaged or too busy to accommodate us.”
In Punta Gorda, they unloaded the supplies, had the plane refueled, and headed back to Lantana with Hurtuk at the controls.
Goldbaum was looking out his window.
“My fuel cap’s not on tight,” he announced.
Now, rather than fly directly toward Lantana, they altered their flight plan to stay near the LaBelle, Clewiston, Pahokee and Belle Glade airports, just in case.
The Piper Cherokee landed safely at the end of a mission that had lasted only nine hours, but now Goldbaum and Hurtuk were carrying a memory that would last the rest of their lives.
“You know,” Goldbaum said, “I lost eight personal friends to COVID. You realize tomorrow’s not guaranteed to anybody. So, you look back and ask what is it you accomplished in life. If you were fortunate enough to help others and didn’t — well shame on you.”