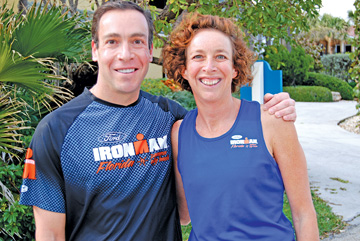 The fitness bug took root many, many years ago, with little notice, when Leonard Griff began teaching his four children through example.
Griff, a retired radiation oncologist, would take the stairs. He’d bike to work. He
jogged before they even called it jogging.
“I think they called it ‘crazy’ back then,” he says. “Very few people were running
and people used to think there was something wrong with me.”
And now?
Well, if ever there were a family addicted to endorphins, it’s this one.
Maybe you’ve heard about this sweaty gang — or saw them, even, at the Marathon of
Palm Beaches, the grandkids wearing sombreros, working the water station on
Hypoluxo Island with grandma (Roberta, also a doctor). 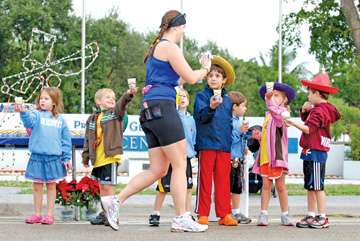 Leonard Griff, 75, ran the half marathon. So did his son, Lawrence, 42, and his
daughter-in-law, Christine, 43. They both flew down from New York.
Nancy Griff, his daughter, ran the full 26.2 miles. So did her husband, Scott Reiter,
a local attorney. “That’s amazing,” says Nancy Griff, who lives on Hypoluxo
Island. “He had lung surgery and 10 years ago, he couldn’t even run a mile.”
Oh, but there’s more.
Charles Griff, another Griff kid who grew up under the examples of Leonard and Roberta,
ran the full marathon — and he’s a Type 1, insulin-dependent diabetic. “I think
that does add another challenge,” Griff says — making a giant Griff family
understatement since intense, prolonged exercise for Type 1 diabetics is tricky
business, requiring constant attention to food, insulin and blood-sugar levels.
Griff, 43, a dermatologist, has had diabetes since he was 18.
Leonard Griff said despite the heavy work schedule when he and his wife were raising
the kids in Harrisburg, Pa., he was always home for after-school sports with
the children.
And it caught on.
“It’s my therapy,” says Nancy Griff, a psychiatrist with a local practice. “It’s one
time that I’m outside and nobody can get in touch with me.”
But wait? Is running 26.2 miles really that much of a physical challenge?
What if you swam 2.4 miles? And biked for 112? And THEN ran a full marathon?
Yes. Drs. Charles and Nancy compete in Ironman triathlons. In the last two years,
the brother-sister duo has done four of them together. And even though they
each qualified for the Boston Marathon when they ran the Palm Beach race back
in December — and, for a while, they intended to run the Boston — they’ve
decided against making the trip. Instead, Charles will compete in an Ironman in
Utah the first of May. 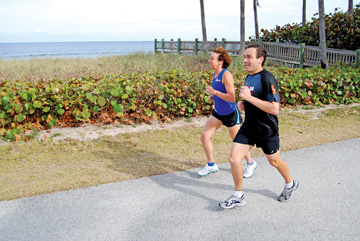 All this running about town — Charles Griff says he runs 30 to 40 miles a week,
usually in the beach neighborhoods around his Ocean Ridge home; Nancy says she
has to run at least eight miles each time out to get a decent workout — has
given the two of them a special connection.
When it’s Mile 21 of a 26.2-mile race and your legs start cramping and your brother
says all the annoying things you need to hear — Put your arms down. Move your
legs. You can do it! — that’s a pretty big bowl of thanks.
In retrospect.
“He did an Ironman without me this year, and I don’t think he had as much fun,”
says Nancy Griff, who played college tennis but didn’t start
competitive running until she was almost finished with her medical studies.
Leonard Griff, who lives on Hypoluxo Island, said he never made workouts mandatory when the kids were growing up, but he did stress “a good sense of values.”
“I think we’ve always had a sense of commitment to be the best we can, but not be
better than anyone,” says Leonard Griff. “I think if you do the athletics and
perform them well, it carries over into the academics.”
And, in this case, it sure did.
In this family of six, there are five doctors and a certified public accountant
with his MBA.
Says dad: “I guess you could say we’re kind of intense people.”
There’s another of those Griff family understatements.