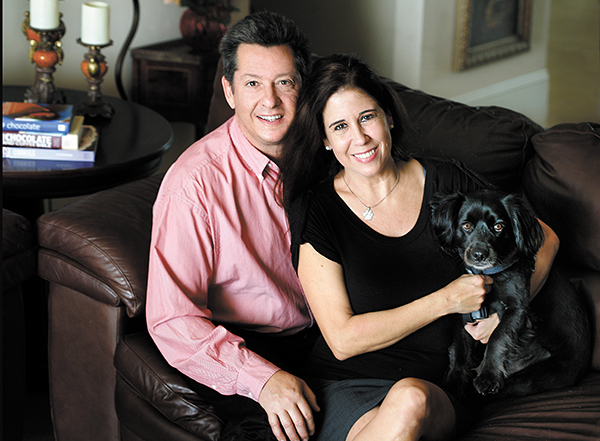 and sizes until the dogs are ready for their forever homes. The Sterns kept Cubby, whom they call their ‘ambassadog.’

Ben Stern was devastated when Smokey, his beloved pet Pomeranian of 16 years, died in 2013.
“He was the first pet I truly got attached to,” Stern said. “When he passed away, it was gut-wrenching. My heart was ripped open more than ever before.”
Stern was despondent for weeks, unable to focus.
His wife, Mayra, who had grown up in a family with pets, suggested getting another dog, but her husband wasn’t ready. After six months, however, she was able to persuade him to take a different route. Rather than adopt, the Sterns would agree to foster a dog.
“Fostering was a perfect option for me, as I was still not ready to adopt another dog but was ready to fill the void,” he said.
Since that day in early 2014, the Sterns have fostered more than two dozen dogs of all breeds and sizes, bringing them into their Highland Beach home and caring for them until the animals are ready to be adopted.
“I have pictures with all of them,” said Ben Stern, 54.
Fostering a pet, as you might imagine, isn’t easy. Many come with issues, physical or emotional; and then there comes the time when the foster dog is handed over to a new family he or she will live with permanently.
“I cry with each dog,” Ben Stern said. “I’m sad for a week,  but knowing that they’ve found a loving home, that’s the goal.”
For the Sterns, who work closely with All for One Pet Rescue based in Royal Palm Beach, the rewards of fostering dogs far outweigh the downside.
“They come to us with broken spirits and then, with love and patience, we help make them better,” Mayra Stern said. “We give these dogs a second chance and their new families an amazing dog that will bring joy to their lives, too.”
Because they have the flexibility to work from home in their real estate business, the Sterns can spend time with dogs they foster. They get help from their son, Alex, 13, and from their secret foster-care weapon, Cubby, a 3-year-old mixed breed who is part border collie, part spaniel and part black Labrador retriever.
The one foster dog the Sterns couldn’t quite bring themselves to give up, Cubby is the Sterns’ “ambassadog,” working with each of the new ones and helping all feel welcome.
“He’s a therapy dog for the other dogs,” said Mayra, 44.
The Sterns say a few of the other dogs they have fostered stand out in large part because of the issues they’ve brought with them.
Norman, for example, a blind bichon frisé, was the first dog the Sterns fostered. He was getting ready for eye surgery and needed drops in his eyes every three hours. He stayed with the family for about two months, before and after surgery, and evolved into a different dog.
“Once he got his sight back, he became Normal Norman,” Mayra Stern said.
Another dog that had a special place in the Sterns’ hearts was Jasmine, a purebred Pomeranian like Smokey and Duster, Mayra’s dog when she and Ben first met.
Jasmine had been used for breeding and had never been out of a cage for four years. While she was fine with other dogs, she wasn’t so great with people and needed a lot of socialization.
While most dogs that come to All for One are either found, taken out of other local shelters or given up by their owners, the organization recently took in a few dogs from South Korea, rescued from a dog meat farm by the Humane Society International.
One was Princess, who ended up with the Sterns and eventually found a good home.
Because it is all-volunteer based and not a shelter, All for One depends on people to foster dogs until they can be adopted. The organization covers all costs, including food and medical bills, and through events at local pet supply stores and other venues helps to find permanent homes for the pets.
Families and individuals are always being sought to foster the dogs, but Ben Stern makes it clear that it’s not for everyone.
For the Sterns, however, it’s something they plan to do for quite some time.
“I can see myself doing this for the rest of my life,” Mayra Stern said.