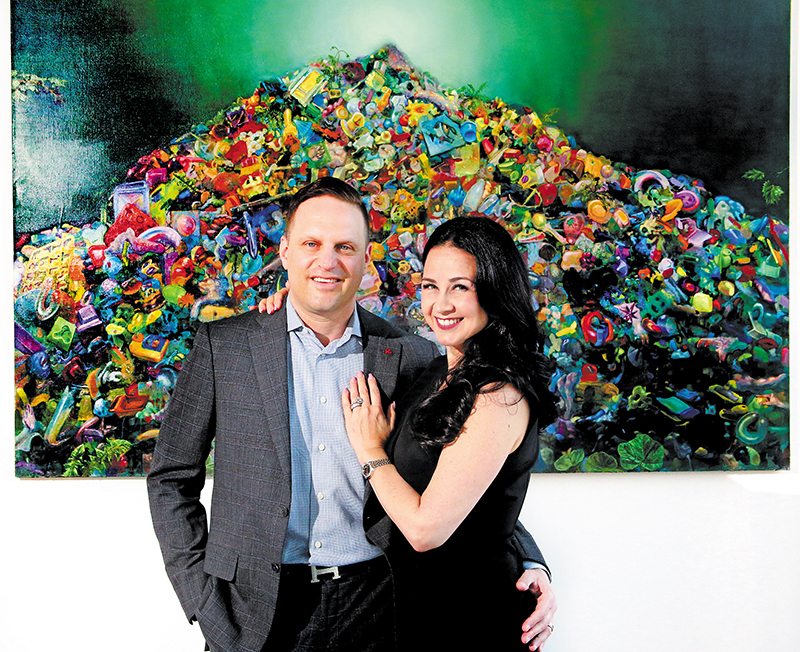 Dr. Evan and Stacey Packer stand in front of a painting by Marin Majic inside their Boca Raton home.  The Packers served as co-chairs of the 70th Anniversary Gala for the Boca Raton Museum of Art. Tim Stepien/The Coastal Star

The couple met as teens in Hollywood, Florida, where they worked at the same record store. Today, music is a mainstay in their lives — and Stacey and Dr. Evan Packer routinely attend concerts in a group of friends fondly called the Bocachellas.

“What we love more than anything — and this dates back to the day we met in the music store — is music,” Stacey Packer said. Dr. Packer “probably knows more about music than anyone I’ve ever met. I swear, if he could come back as anyone, he would be in the music industry.

“It’s funny. The path he chose is so the opposite of that,” she said.

Dr. Packer is a neurosurgeon and managing partner at the Brain and Spine Center in Delray Beach, practicing at both Delray Medical Center and Boca Regional Hospital. The path the couple has taken since those Hollywood days has led to the family they’ve established in Boca Raton and their active support in the community, primarily aimed at the Boca Raton Museum of Art, Florence Fuller Child Development Centers and Pine Crest School.

After meeting in Hollywood, the Packers maintained a long-distance relationship during college. She got her bachelor’s at the University of Maryland, he from Michigan. They both headed to Tampa when he went to the University of South Florida’s College of Medicine for his medical degree. Stacey joined Tampa General Hospital’s marketing department, and later became vice president of development at its Foundation. Meanwhile, Dr. Packer did his residency through USF at Tampa General and received advanced training in neurosurgical oncology at Moffitt Comprehensive Cancer Center and Research Institute.

In 2005, the couple moved to Boca Raton for family, and Dr. Packer joined the Brain and Spine Center.

“We slowly got involved in the community,” Stacey said. “I got to meet some great people who got me involved at our kids’ school at first.”

The Packers’ children, Julia, 21, and Isabel, 16, both attended Pine Crest School in Boca Raton through eighth grade and then its Fort Lauderdale high school. Julia is now a sophomore at the University of Wisconsin. Dr. Packer, an alumnus of Pine Crest, today serves on its board.

Stacey describes Pine Crest as a community to her. She met her closest friends there. Through Pine Crest, she got to know the people at Florence Fuller, where she began to volunteer, joined the board and is serving her third and final year as chairwoman. She praised Florence Fuller for its dedication to providing access to education to people who can’t afford it.

Through their common interest in art collecting, the Packers, who are both 48, met people at the Boca Raton Museum of Art who ultimately asked whether Dr. Packer was interested in joining the board. “It’s just amazing that the folks involved with the museum have made it a priority to support a facility like that,” Stacey said. “They teach my husband and I so much. It’s stimulating in a very different way.”

The Packers co-chaired the museum’s 70th Anniversary Gala this year, a record-breaking fundraiser. Dr. Packer “says I’m kind of a connector,” Stacey Packer says. “I try to connect the dots between people” and put people together whose interests may be synergistic. She brought that quality and her fundraising background to the gala, asking for two more co-chairs — “to bring in people with different strengths.”

“I’m good at raising money, but I have a friend, Carrie Rubin, who knows how to put on an event. I don’t have to worry about that,”  she said. Packer also asked John Tolbert of Boca Raton Resort & Club to host because of the goal to increase attendance this year.

“You have to connect people. Friends give to friends. Friends support friends.”

Music and charities aside, Packer spends her leisure time ballroom dancing — an interest spurred by a friend’s participation in Boca’s Ballroom Battle. She dances four times a week at Fred Astaire Studio and competes throughout the state. Dr. Packer is pursuing a business degree, traveling once a month to Northwestern University’s Kellogg School of Management.

Family is most important of all to the Packers. The couple is close with their daughters and their large, extended family. “We have an awesome one. If the family is OK, then bring everything else on,” she said. The family includes two dogs that Dr. Packer calls “chompsters” — Bailey, a rescue Lab mix, and Stella, a King Charles.

Advice to anyone following in their footsteps: “It’s really important to have face-to-face honest relationships with people. Most of the great things we experience in this community start with a great friendship,” Stacey said. “It’s connection that can be so gratifying. That really creates community spirit. That’s what a community is — all the relationships that exist.”