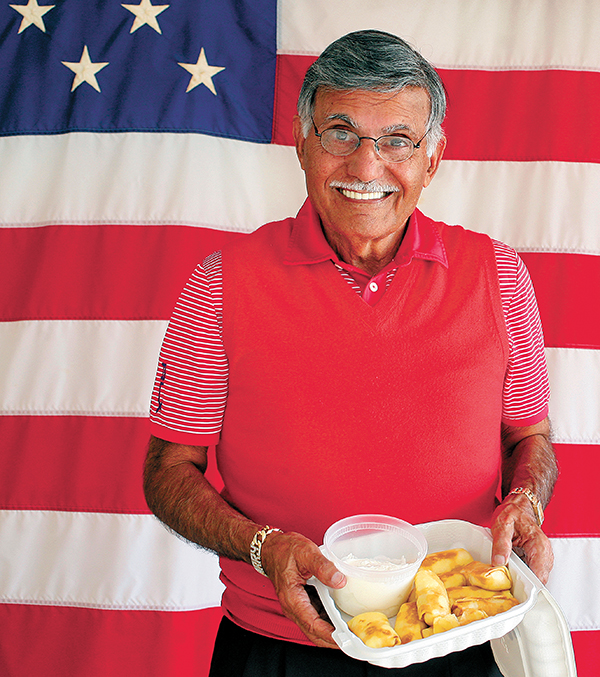 Harry Adwar volunteers at the Caring Kitchen, a hot-meal program in Delray Beach.

He does cooking, cleaning and raises money for the organization.

Harry Adwar knows what it’s like to go to bed hungry.
A successful business owner who now lives in Highland Beach several months of the year, Adwar was the 10th of 14 children raised by a mother who struggled to keep the family fed after her husband died.
“I know what it’s like to have to go to sleep with an empty belly,” he says.
Because of his background, it’s not surprising to find Adwar, 80, at the Caring Kitchen — a hot-meal food program in Delray Beach — every Monday doing just about anything that’s needed.
It also comes as no surprise that Adwar was a star with children at the Caring Kitchen’s annual holiday party last month, when he helped them with crafts.
“Harry is so willing, ready and able to do whatever needs to be done,” says April Hazamy, program director and client advocate for CROS Ministries, which operates the Caring Kitchen. “He’s a very hard worker and he’s always happy. The joy of being around him is just very catching.”
A volunteer at the Caring Kitchen for six years, Adwar doesn’t see any task as beneath him.
“I’m a worker, it makes no difference to me what I have to do,” he says. “I cook, I clean, I do everything.”
His efforts go beyond what’s expected.
A member of a local country club, Adwar goes over there every Sunday to pick up fruits and other breakfast foods to hand out to Caring Kitchen clients soon after he arrives at 8 a.m. Monday.
He also organizes canned-food and clothing drives for the Caring Kitchen at his Boca Highland community, where he serves as vice president of both the umbrella association and of his building, Braemar Isle.
In addition, he frequently puts together events to raise money for the Caring Kitchen as well as for some of its homeless clients.
“My car is always full when I go over there,” he said, adding that he and his wife of 58 years, Judith, also lend financial support to several organizations.
Adwar is active in his synagogue in Boca Raton and in the town of Highland Beach. On Dec. 5, he will lead the lighting of the menorah during the town’s annual Light Up the Holidays celebration.
Along with his work at the Caring Kitchen, Adwar volunteers with a similar, but larger, program on Long Island when he’s up north for four months of the year.
“I think I owe some of the wealth that I have gained to the poor and underprivileged,” he said. “I feel that I’m giving back.”
As a child, Adwar helped his mother pay for groceries while the family lived on Manhattan’s Lower East Side. He and his two brothers would shine shoes for 5 cents, taking turns bringing in customers, taking the money and doing the shining.
“If we made $3, that was a lot of money for my mother,” he said.
To pay the bills Adwar’s mother worked three jobs. She resisted taking government assistance.
“My mother would never do that,” he says.
As he got older, Adwar worked with a brother’s foundry and then started his own business, manufacturing and wholesaling jewelry.
Throughout his success, Adwar has remembered his roots and makes it a point to treat everyone, including homeless people, with respect.
“I never look at them as if they’re below me,” he says. “I see them as equals who didn’t have the luck that I had.”

NOMINATE SOMEONE TO BE A COASTAL STAR
Send a note to news@thecoastalstar.com or call 337-1553.