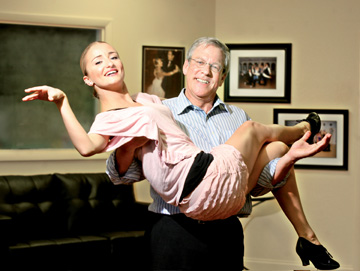 Bob Gittlin believes so strongly in helping kids go to college, he will do practically anything to support the cause — and that includes ballroom dancing lessons, six days a week.
Gittlin has been training to compete in a Dancing with the Stars spinoff event called Boca’s Ballroom Battle that raises thousands of dollars annually for the Boca Raton-based George Snow Scholarship Fund. The fund provides educational grants to young scholars throughout the area, a mission that transforms lives, Gittlin says. So he agreed to try to transform himself into a dancer for the big event on Aug. 17.
“My hips don’t move, I have two left feet, I don’t have great posture. All the things you would want to have as a dancer, I don’t have,” says Gittlin, 64, of coastal Delray Beach. “But it was something I wanted to do to help the Snow Foundation. You can really see the difference they make in the world.”
A huge believer in “paying it forward,” Gittlin has been recognized by many charitable organizations for his service over the years. He is currently on the board of directors of the Golden Bell Education Foundation, which brings much-needed funding to Boca Raton schools. For a decade now, he’s played Santa Claus for nonprofit organizations during the holiday season. He also actively supports “Golden Retrievals,” a South Florida golden retriever rescue organization.
A theme of charitable giving runs through his work life, too. As president of JKG Group in Boca Raton since 1994, Gittlin has grown the company from a small printing and graphics firm into a multifaceted marketing and corporate communications provider with national and international clients and a track record of pro bono work for the nonprofit community. The Boca Raton Chamber of Commerce named Gittlin its 2001 Business Leader of the Year, and the JKG Group was awarded the Chamber’s Company of the Year title in 2008.
One of JKG’s most visible local clients is the Office Depot Foundation. In 2001 Gittlin and his staff helped the foundation launch its National Backpack Program, which supplies free backpacks to underprivileged children at the start of each school year.
“We design the backpacks, source them, distribute them, and create the entire PR campaign around them,” Gittlin says. “This year we will celebrate the foundation giving away their 2.9 millionth backpack to at-risk children, both domestically and globally.”
When it comes to personal achievements, Gittlin is proudest of his efforts, as a single dad, to raise his son, Grant Gittlin. “I used to take him with me everywhere, to all my business meetings, from the time he was about 8 years old. And even then he could hold his own,”  Gittlin says.
Today Grant is 27 and “right-hand man” to the chairman and CEO of MediaLink in New York City and Los Angeles.
Perhaps Grant inherited his dad’s tenacity. It’s the trait that keeps Gittlin striving to improve his health and fitness with daily 6:30 a.m. personal training sessions at The Facility, a Boca gym that caters to older adults.
“My trainer told me one day that I’m the most tenacious [guy] he’s ever trained,” Gittlin says. “So when the program coordinator for Boca’s Ballroom Battle said we need a stage name for you, and it can’t be Twinkle Toes, I said, OK, it’ll be Tenacious Toes.”
Mariya-Khristina Shurupova, his dance teacher and partner at the Fred Astaire Dance Studio in Boca Raton, where all eight of the event’s contestants are training, has choreographed a routine for him to the soundtrack of The Pink Panther. Tenacious Toes won’t reveal many details, but he does acknowledge that his costume is pink, and a little outrageous.
“I have three goals,” he says. “To raise as much money as I can for kids’ scholarships; to give people kind enough to attend the best performance I can give them; and to inspire someone sitting in the audience to volunteer to dance next
year.”