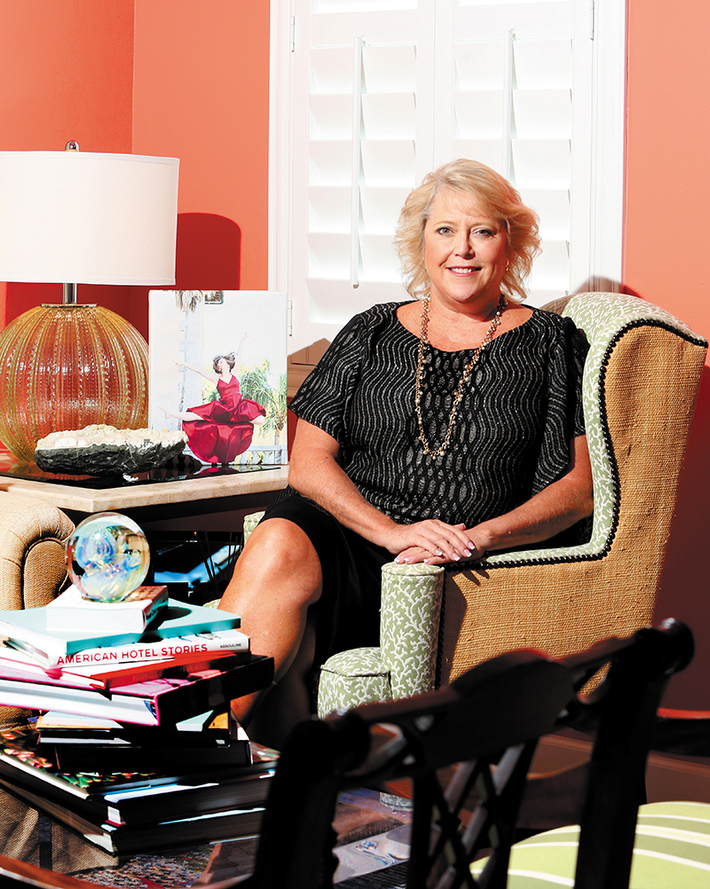 Robin Deyo has worked on Junior League projects that have touched everything from hunger to family/child welfare and the community garden. Tim Stepien/The Coastal Star

Innovative ideas. An amazing history of volunteerism. A techy background and a winning personality.
Those qualities and more are why Boca Raton resident Robin Deyo was named honorary chairwoman for the Junior League of Boca Raton’s 33rd annual Woman Volunteer of the Year awards ceremony, which this year will be virtual.
“I am honored to partake this year — it’s such a compliment,” said Deyo, a sustaining member of the Junior League and the former co-owner and co-founder of Cendyn, which provides technical assistance to more than 30,000 destinations and hotels in 130 countries.
Instead of honoring a single volunteer, this year’s program will celebrate the Junior League’s decades of volunteerism. The virtual program, planned for 6:30-8:30 p.m. Nov. 13, will celebrate 100 years of women’s voting rights, the Junior League of Boca Raton’s 50th anniversary and the contributions of 685 women who have been nominated for their community volunteerism over the years.
“We will … be sharing stories about people’s experience being volunteers in the community. There will be a historical perspective on the 19th Amendment and the 685 women nominated over the last 32 years,” Junior League President Cristy Stewart-Harfmann said.
Deyo’s background, dedication and years of involvement with the Junior League made her the perfect fit for honorary chair.
“She is amazing. She is level-headed, kind, thoughtful and a past nominee for Woman Volunteer of the Year,” Stewart-Harfmann said. “Virtual sounds so simple but it is not — that is one reason it’s been so nice she is here to help us. We have been able to really focus on the logistics and how we create the event.”
The Junior League’s aim is to develop women’s potential and better the community through the action and leadership of trained volunteers. And celebrating women is why Deyo has remained involved in the organization for 20 years.
“I have loved being honorary chair this year. I just jumped into the deep end in wanting to solicit sponsorships and ads and helping with the scripts for the presentation,” she said. “It’s just going to be a wonderful celebration of women.”
Deyo, 56, has worked on Junior League projects that addressed hunger, family/child welfare, the community garden and fundraising. The Junior League also provides assistance to Boca Raton’s Diaper Bank and Boca Helping Hands.
Deyo joined the Junior League while she was working in the hotel business. At the time, the Junior League had hired Cendyn to create a CD-ROM to accompany its annual cookbook. Thanks to Deyo’s involvement, the cookbook won a 2001 James Beard Foundation Award for excellence.
Deyo called the project “a turning point” in her life.
“Junior League cookbooks around the world are well-known because they are really good. A lot of people collect them,” Deyo said.
Deyo served as vice president of finance, cookbook chair, international PR co-chair, fund development assisting adviser, worked on project development and planning as a board of directors member, and served as assistant chair for the Woman Volunteer of the Year event.
Deyo has continued her involvement as a sustaining member for the past six years, with this year’s work especially relevant because programming had to go virtual during the coronavirus pandemic.
“It was a good year for me to participate — it was in my wheelhouse,” Deyo said.
Junior Leaguer Dorothy MacDiarmid said Deyo’s contributions began the minute she joined and never stopped.
“When she joined we were publishing the first cookbook and she came up with the idea of putting the cookbook on a CD-ROM, which was a high-tech thing then. We had this beautiful coffee style cookbook on the CD-ROM. We were the only Junior League in the country that had a cookbook like that,” said MacDiarmid, a Junior League president in 2005 and 2006 and chair for Woman Volunteer of the Year in 2006.
“She is just amazing. Sometimes it is hard to find someone who has that really awesome technical ability and has so many people skills and such a soft side. This is the perfect year for her.”
When Deyo first joined the Junior League, her husband, Charles, jokingly called Tuesdays at work “nonprofit Tuesdays” because so many Cendyn employees were busy with their Junior League obligations that day.
“We gave everybody flexibility to be active and participate in their committee roles,” Deyo recalled. She said more than 15 of her employees were Junior League members and the company paid for all their memberships.
Her daughter Ryn, now 19, grew up volunteering at Junior League events. Deyo said she hoped to set an example.
“I always told Ryn my biggest rule is to treat others the way you want to be treated. I think volunteerism is just an extension of that. Give a lot of good and contribute to your community and I am sure it will come back to you,” Deyo said.
Stewart-Harfmann said Deyo’s lifetime of dedication is part of what makes her contributions so special.
“Robin has done so much for the Junior League and we are so happy we will be able to honor her. … She really epitomized what we hope all our members will be — women who are able to balance a career and also volunteer in the community.”

Woman Volunteer
of the Year
What: Junior League honors 32 years of volunteering.
When: 6:30-8:30 p.m. Nov. 13
Where: Virtual
Tickets: $50
Info: jlbocaraton.ticket.qtego.net/tickets/list