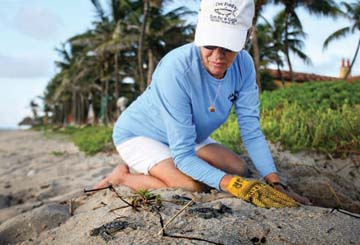 Joan Lorne checks a loggerhead nest the morning after the eggs hatched and finds a couple of stragglers, who are set free.

Venture down to Delray Beach not long after sunrise, and you can’t miss her.
While most of the early-morning beachgoers stroll or jog the day awake, Joan Lorne bounces over the sand in a Yamaha Ultramatic Grizzly 350 ATV, a slender woman with a sun-bleached ponytail dangling out the back of her white ball cap and the kind of deep tan that tells you she’s been doing this quite a while.
Thirteen years, in fact.
A couple of mornings a week since 2000, Lorne has monitored the 3-mile stretch of sand between Adams Road in Ocean Ridge and Pelican Lane in Delray Beach, doing her part to make sure the sea turtle eggs that are laid between March and October each year survive. 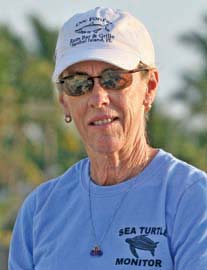 She scans the sand for turtle tracks, marks the new nests with a “Do Not Disturb” sign, notes the date and checks again after they hatch for any left behind.
“I grew up here, and I don’t ever remember people talking about sea turtles,” she says, “but I want to keep doing this. I see what’s washed ashore each morning, I wave at people, and I’m doing something worthwhile.”
One day back in 1995, Lorne and her then-13-year-old daughter, Jackie, visited the Loggerhead MarineLife Center in Juno Beach.
“I want to volunteer here,” Jackie announced, so the Lornes drove their daughter to Juno Beach and back every Saturday morning.
Jackie became a turtle monitor, and when she left for college, her mother said, “I’ll keep doing it.”
She’s been doing it ever since, but not alone. Her colleagues Darlene Duggan, Margie Talbott, Jim Jolley and Billie Johnston monitor the coast on her days off.
“We call ourselves the Keepers of the Nest,” she says.
Marine biologists tell us that only one in every 1,000 eggs produces a hatchling that survives. But when your family business is a funeral home, those are good odds.
Joan Lorne’s history in Delray Beach is complicated but delightful.
She and her twin brother, Tim, were born on Christmas Day 1951 in Chicago and came to Delray Beach at 6 weeks old.
Her husband’s father, Wilbur Lorne, opened the Lorne & Sons Funeral Home here in 1957. Joan’s husband, Patrick, and Patrick’s brother, Michael, run the business, with help from her son, Colin, and Michael’s son, Kevin.
Her other daughter, Jessica, and her husband, Jon, are the parents of twin girls.
And one more thing: Michael, her husband’s brother, is married to Joan’s sister, Mary.
“We’re one of the few family-run funeral homes in the area,” she says, without a hint of irony.
As for Jackie Lorne, the 13-year-old girl who taught her mother to love sea turtles, she’s Jackie Kingston now, a marine biologist who works as an environmental project manager for Florida Power & Light.