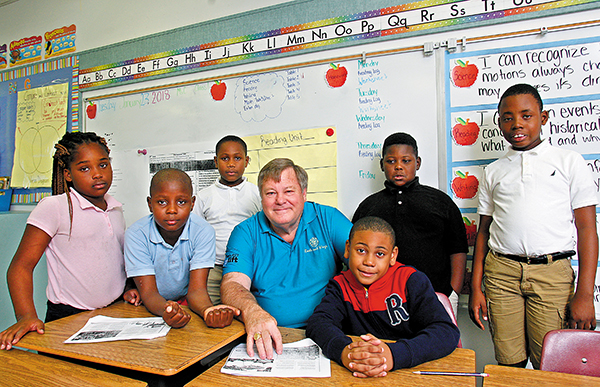 There was a time, before he became a successful business owner, when Ted Hoskinson’s world revolved around education.
Soon after he graduated from Tulane University, Hoskinson returned to St. Albans School in Washington, D.C., a prestigious private school where he had once been a classmate of future prominent figures, including former Vice President Al Gore.
Hoskinson taught fourth grade and ran the school’s summer program during his 15 years there, gaining an understanding of the challenges educators face and the lack of recognition that often comes with the territory.
So it comes as no surprise that Hoskinson, now 70, is devoting much of his retirement to making sure the educators and staff in Delray Beach’s public schools get a chance to be in the spotlight.
Through Roots and Wings, a nonprofit he founded in 2016, Hoskinson is not only focused on educators but also on helping students in public schools improve their reading skills so they can succeed.
“In this city, this town, we have a tremendous need to make sure people can go to any level they want to, and we have to give them the opportunity to do so,” he said.
Working largely under the radar, Hoskinson and Roots and Wings put time and money into three programs.
The first program — the Above and Beyond Awards — focuses on rewarding teachers and staff members selected by their principals for outstanding work. The teachers receive gift cards during small ceremonies in the classroom, with students involved.
Presentations are made three times a year in elementary schools and four times a year in middle schools and high schools.
Last year, in its first full year, Above and Beyond recognized 144 public school teachers and 27 staff members.
“Teachers at all levels need to be appreciated, and it wasn’t being done to this level,” Hoskinson said.
Under the umbrella of what has been dubbed Project Uplift, Roots and Wings last year awarded $10,000 to the Achievement Centers for Children & Families to make it possible for 25 students to attend a summer program with an academic element at Pine Grove Elementary School.
The group also funds a program at Pine Grove to help third-graders pass the Florida Standards Assessments test so they can move into fourth grade. In the pilot program Hoskinson hopes will be successful and spread to other schools, students attend a one-hour after-school class three days a week taught by Pine Grove teachers.
For Hoskinson, who along with his board raises money for the programs, a personal motivation drives Roots and Wings.
When he and his lawyer wife of 34 years, Anne, retired to Florida 12 years ago, they decided that when they died they would give their money to elementary education.
“Nobody was focusing on elementary education,” he said.
For his first 10 years in South Florida, Hoskinson took it easy, playing tennis, traveling with Anne and enjoying all that Delray Beach had to offer.
After Anne died in April 2016, Hoskinson decided he wouldn’t wait to start building their legacy and, inspired by his wife’s commitment to education, started the nonprofit organization.
“I could have ridden off into the sunset and done whatever I wanted to, but I didn’t because there’s a real need at both the teacher level and the student level,” he said, adding that he was financially secure after selling a business that included 10 card and gift stores and a wholesale balloon and accessories company.
Hoskinson, who lives in Coastal Delray Beach, says that running Roots and Wings takes a lot of time and effort, but is well worth the investment.
“For me a good day is when I wake up and say, ‘This is going to be a great day because we’re going to reward teachers,’ ” he said.