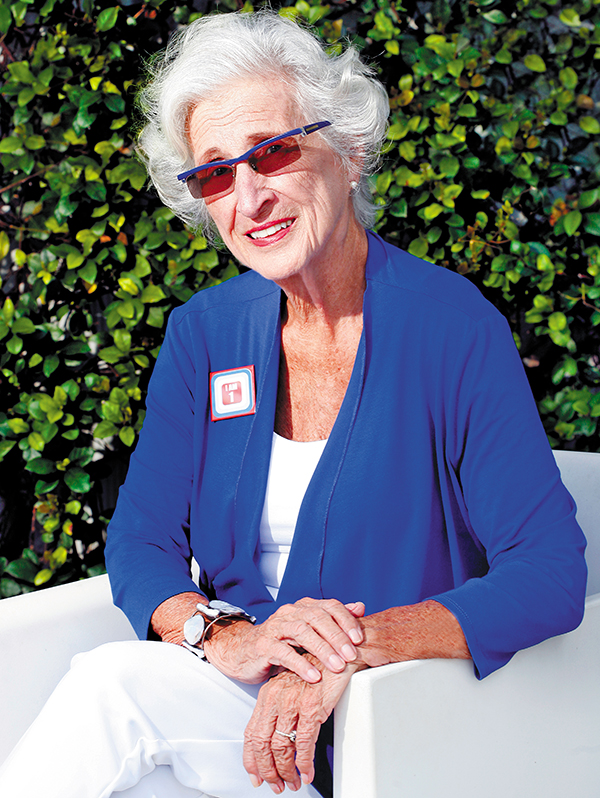 Rita Thrasher dedicates her work to her daughters. Her youngest died at age 43. Her oldest died at age 60. Both had mental illnesses. The youngest, Valerie, suffered from bipolar disorder. The oldest, Leslie, suffered from schizo-affective disorder. Valerie was diagnosed at 15, Leslie at 28.
Thrasher, a Broward County Public Schools reading specialist at the time, said she remembers not knowing what to do or where to turn. Her colleagues made a referral to the Faulk Center for Counseling.
The resident of the Royal Palm Yacht & Country Club has been affiliated with the organization ever since and will receive its Community Impact Advocacy Award next month for her work as president and CEO of Boca Raton’s Promise.
Thrasher co-founded the nonprofit with Dr. Merrilee Middleton, who first treated Valerie, and developed the “I AM 1” campaign with the goal of getting those who understand the tragedy of mental illness to talk about it. The name symbolizes the silent struggle that affects one in four in the United States.
“One in four will have an issue with mental health,” Thrasher said. “I am one of those four.”
Thrasher draws no salary for her work, which seeks to build alliances and identify resources in the treatment of mental illness.
Her surviving daughter, Marla, helped with the campaign by appearing in the film We Are One, which chronicles the stories of those whose loved ones have faced or are facing mental illness.
“My daughter and I have reconnected on a new level,” Thrasher said. “We are no longer going to moan and groan about the loss of her siblings or my children. We are joining forces. We are holding our hands out to help and guide each other into the future.
“The hope that we have is to get 1,000 people starting the conversation. We are on the brink of opening the doors to South Florida’s mental health crisis, and that’s why we’re doing this.”
Thrasher, 85, also sponsors an LGBTQ+ support group that meets weekly at the Faulk Center for Counseling and is involved with “Breaking the Silence,” a fourth- and fifth-grade curriculum aimed at bringing mental illness out of the shadows. The initiative focuses on educating children about depression, obsessive-compulsive behavior, panic attacks and other brain malfunctions that occur through no fault of their own.
“It doesn’t have to scare the hell out everybody who talks about it,” Thrasher said. “We want people to give up the shame, the fear that enshrouds the community.
“I am aware that there are many people who are dealing with mental health problems. I would encourage them to seek the shelter of others in the same situation and share their miseries and their hopes.”