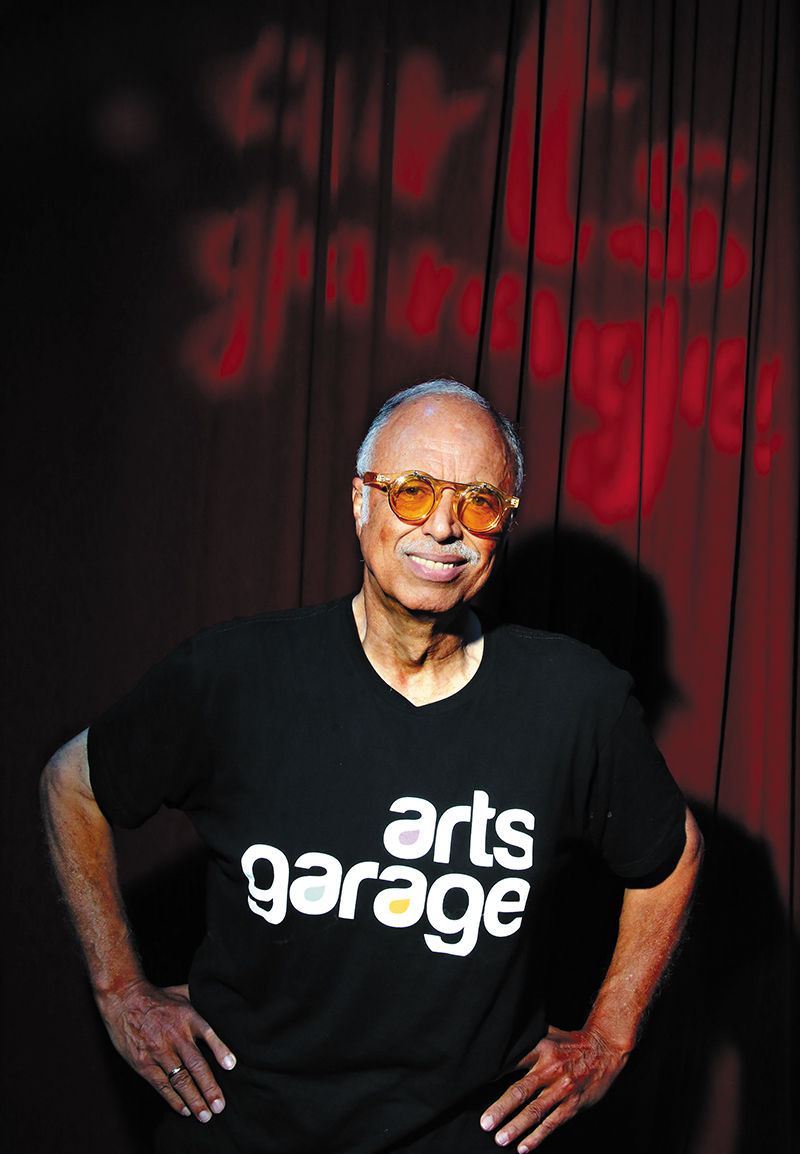 Harry Valentine of coastal Boca Raton says people at the Arts Garage are like family to him. Tim Stepien/The Coastal Star

Harry Valentine’s love affair with the Arts Garage began a year and a half ago when he was wandering around downtown Delray Beach and heard music coming from the venue.
“It was the music that first attracted me to the place,” he said. He stood outside for a while taking in the tunes and thought about going inside. One of the employees had seen him there and called House Manager Suzanne Haley, suggesting she might have another volunteer out front.
“I just went inside to check it out,” Valentine said. “The manager came out and invited me in to listen to the music.”
He started volunteering that night.
But there is more to this relationship. Valentine, who lives in coastal Boca Raton, credits the people at the Arts Garage for helping him deal with a debilitating condition and giving him a “second family” that supports him.
He has multiple chemical sensitivity, a disorder that leaves the body susceptible to scents, smells and aromas that could send someone with the condition to the hospital or leave him bedridden.
The symptoms people report include headache, fatigue, dizziness, nausea, congestion, itching, sneezing, sore throat, chest pain, changes in heart rhythm, breathing problems, gas, confusion, trouble concentrating, memory problems and mood changes. Possible triggers that set off symptoms include tobacco smoke, auto exhaust, perfume, insecticide, new carpet and chlorine.
There are no universally accepted treatments for multiple chemical sensitivity.
Valentine receives acupuncture treatments and physical therapy, has sessions with a chiropractor and occasionally has to breathe with an oxygen tank. Sometimes, he uses a walker.
Valentine and his wife of 12 years are divorcing. They had been together for 14 years. She was his primary caregiver.
“It’s now the people who attract me to this place,” said Valentine, 73. “They keep it fresh. There is just a lot of good energy and I guess because I have been so isolated, folks here sort of become a second family to me.”
Marjorie Waldo, president and CEO of the Arts Garage, says Valentine is amazing. “I had no idea he was ill,” she said. “I saw him working as hard or harder than any volunteer. He’s here to the last minute.”
When Waldo decided to do a promotional video featuring the people who work behind the scenes, Valentine was asked to be part of it.
“We wanted to highlight what is behind the curtain,” Waldo said, “some of the heart of the Arts Garage. So we made a list of people who could tell the story of the other side of the Arts Garage, and that is when I found out about his illness and I was blown away. He told me we were one of the reasons he was not in assisted living. He was energized by what we do and finds so much joy here. It is so moving to me.”
Valentine doesn’t let his condition get in the way of hard work. He volunteers when he can and is considered one of the most reliable Arts Garage workers.
“Thank God for Harry,” said fellow worker Joyce Winston, who has volunteered at the Arts Garage for nine years. “He is a hard worker, helpful and very conscientious. I know about his illness, but he handles it well.”
With two master’s degrees, one from Harvard in public administration, Valentine was used to giving orders rather than taking them as chief of examinations for the state of Maryland. He retired in 1996 and moved to Boca Raton for health reasons.
“I welcome the opportunity to represent the Arts Garage. They have a really good air quality,” Valentine said.
His duties typically include getting to work early to deal with chairs, tablecloths, changing batteries, setting up the concessions, escorting patrons to their seats, helping people with disabilities with whatever they need and handing out programs.
“Things can change and I am hopeful about my situation,” he said. “But there are people much worse than I am.”
And things are changing for Valentine. Last month he went swimming in the ocean for the first time in five years.
“I’ve been trying to get up to swimming again,” he said. “I live right across the street from the beach. Usually I need someone to be around if I go swimming, so yesterday it was calm and I just dove right in. I didn’t go far, but I did dive in. There is a Spanish saying that applies to me. Poco a poco.”
In English it means little by little.