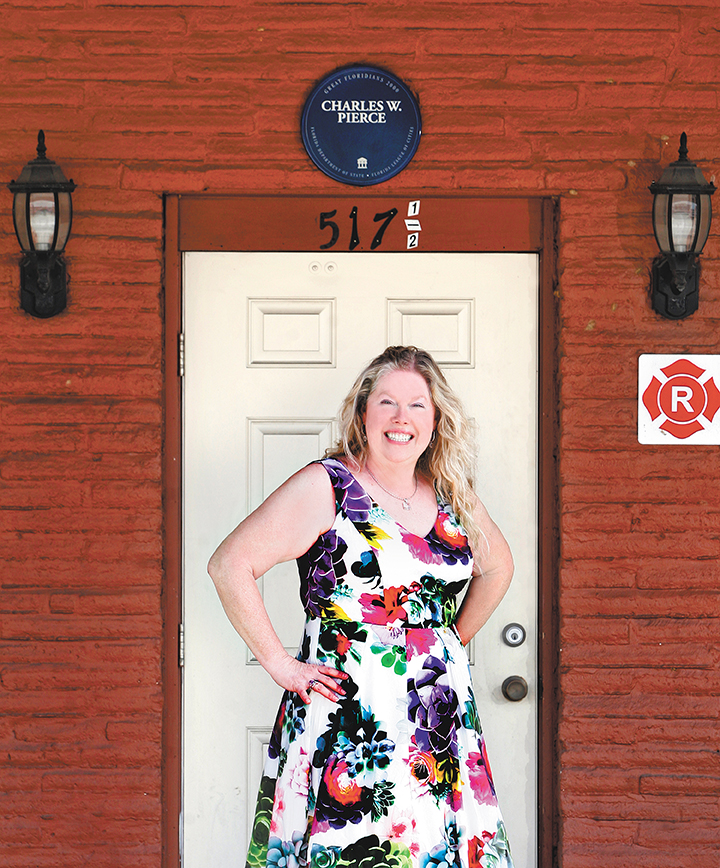 Susan Oyer stands on Ocean Avenue where her father had a real estate/insurance office.

Boca Raton Community Middle School teacher Susan Oyer teaches her students to do much more than just crack the books.
For the past three years, her students have raised money to plant trees in Haiti and dig water wells in Africa.
Oyer, a descendant of legendary Barefoot Mailman Charlie Pierce and daughter of former Boynton Beach Mayor Harvey E. Oyer Jr., is teaching her students to be global citizens.
“Social responsibility may not be in the curriculum, but it is an important skill I try to instill every year,” says Oyer, who teaches civics, economics and American history.
To raise the money to plant trees, Oyer and her seventh- and eighth-graders sold wristbands with tree-friendly slogans that the students came up with like “Just Tree It” and “Grow Green.”
Through their Earth Day 2014, 2015 and 2016 projects, Oyer and her students raised $400, $1,500 and $1,400 — enough money to plant 6,200 trees, 3,000 trees in Haiti alone.
Oyer, who lives in Boynton Beach, and her students choose Haiti as a recipient for so many trees “because Haiti is our neighbor, was listed as a treeless nation by the U.N. in 2000, and Americans help their neighbors when in need. Being a good neighbor and helping Haiti helps us all. Beyond reducing global warming and climate change, the trees improve the quality of life and reduce soil erosion for their people.”
Last fall, Oyer’s classes joined with students from Boca Middle School’s student government to sell pasta shaped like logos from various colleges to raise money to dig water wells in Africa. That effort raised $1,800.
“Water is essential to life. Living in South Florida we are all aware of the importance of a fresh, clean water supply. We are lucky to have the Everglades,” says Oyer, who has been teaching for 18 years. “There is a lot of water in Africa; it is just deep underground.”
To put all the students’ hard work and money raised into action, Oyer works with Julian Lennon’s foundation.
“Almost all of the funds have gone to Julian Lennon’s White Feather Foundation,” Oyer says. “I love the transparency of the foundation and the fact no donated money goes to administrative costs. So 100 percent of the funds go exactly where you want them to go and you get updates on the impact of your donations.”
Oyer, who is also president and founder of the St. George’s Society of Palm Beach (a nonprofit that supports local and English charities promoting positive exchanges between Palm Beach County and England), calls herself “a big environmentalist.”
“We have a responsibility to our planet. We have a responsibility to future generations to leave this world as great as we found it,” says Oyer. “Someone better step up and make a difference.”
She says she gets her let’s-do-something-about-this drive from her father, who died in 2010.
“I had a dad who was a mayor and on city commission and on every possible thing you could be on,” Oyer says. “There’s no being in my family and not making a difference.”
Making a difference is why Oyer, who declined to share her age, steps into a classroom and teaches.
“The world will be a better place because I went to work (today),” Oyer says. “I’m big on that. That’s why I became a teacher.”