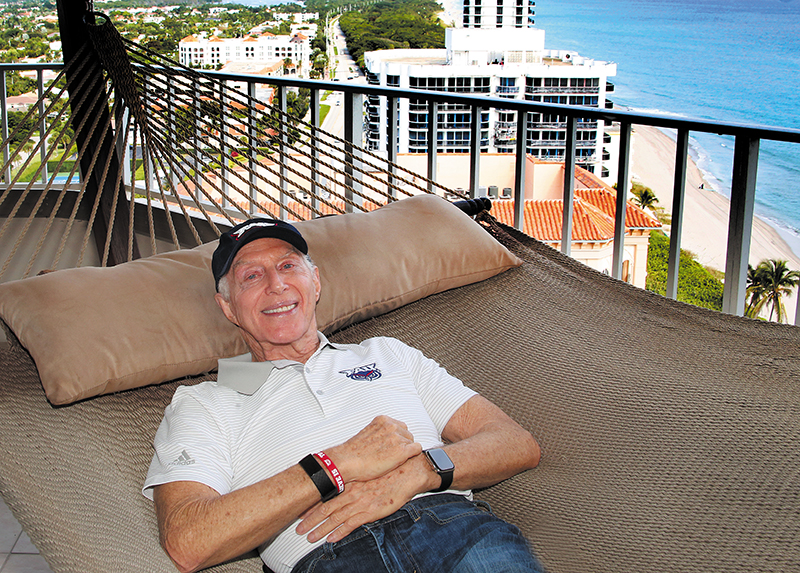 Professor emeritus Eric Shaw reclines at home 21 stories above Boca but does not feel retired. He mentors Ph.D. students and says life is a self-improvement project. Tim Stepien/The Coastal Star

After four decades of telling students that neither marketing — nor money — is inherently evil, Dr. Eric H. Shaw stepped away from the lectern to powerfully demonstrate this principle.
Just before Christmas, the marketing scholar and professor emeritus pledged $2 million to Florida Atlantic University, his alma mater and longtime employer.
“Most people believe money is the root of all evil, but it’s not — it’s greed,” he said.
Money can, and should, be used as a force for good, Shaw believes. Giving back to the college, he said, is his way of paying it forward.
Shaw’s donation will help students involved in various fields of study, said Chris Delisio, FAU’s vice president for institutional advancement.
“Dr. Shaw is a special, special person,” Delisio added. “Gifts like this do not happen every day. We are incredibly grateful for his kind generosity.”
Specifically, the $2 million donation will provide scholarships and excellence awards to student athletes, and to business, honor society and music students. Shaw said the money will be awarded as a series of gifts while he is alive and will continue to be distributed as a planned endowment after his death.
Shaw, 78, who is unmarried, received his bachelor’s and master’s degrees in business administration from FAU in 1972 and 1973, and earned a Ph.D. in 1985 from Temple University.
He began teaching marketing at FAU in 1973 and has since held positions as marketing department chairman, dean and a member of FAU’s board of trustees, among other roles.
Shaw also has been an active member of Boca Raton and Palm Beach business and charitable organizations.
Although retired from regular teaching duties, he has served as FAU’s emeritus professor of marketing since 2014. He also mentors marketing Ph.D. students around the world, he said.
“These students have a narrow area of study — the history of marketing thought,” Shaw said. “They take a broader view than most, looking at how marketing impacts society and how society impacts marketing. It’s not just about how to make money.”
Shaw said he made much of the money he is giving away by serving as an expert witness in court cases involving several South Florida businesses and national corporations. He was called to testify about such issues as wrongful termination of marketing contracts, deceptive marketing practices and trademark infringement, according to his extensive curriculum vitae.
Shaw has written extensively about marketing history, practices and schools of thought. He is cited as an expert and scholar in many marketing books and essays by other authors.
In a 2015 piece he wrote for the Journal of Historical Research in Marketing, Shaw discussed how much he loved teaching — and learning from — his students.
“I thoroughly enjoy teaching the history of marketing thought class,” Shaw wrote. “Every time I reread familiar sources and hear the fresh perspectives of my students, I learn from the process. It improves my understanding, forces me to rethink ideas long taken for granted. …
“This old professor, of course, can only hope that his youthful students learn as much from such a class as he does.”
Asked about his future plans, the longtime Boca Raton resident said he enjoys his ocean view and his unstructured lifestyle, but he is still a driven man.
“I think of myself as a self-improvement project,” he said. “I am continually working on getting better.”