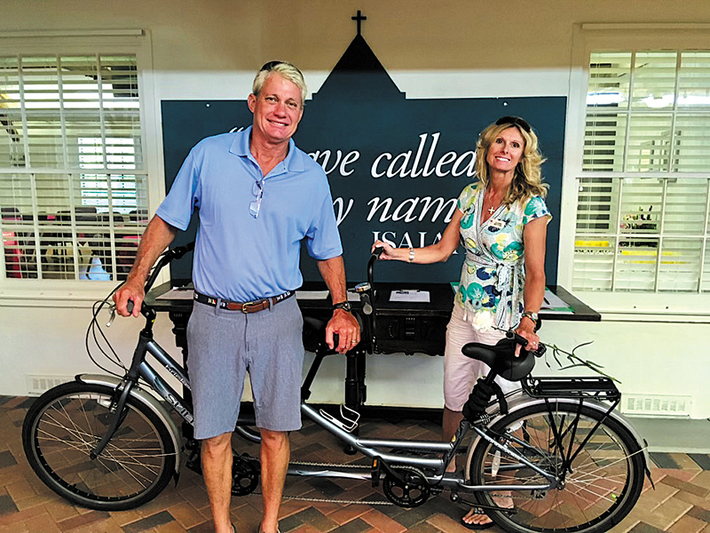 Phil Wotton, Delray Beach’s Ocean Rescue division chief, was riding with his wife, Elaine, on their tandem bicycle when they stopped to assist an unconscious cyclist in March. Photo provided

Philip “Phil” Wotton is an unassuming fellow. As Ocean Rescue division chief in Delray Beach, Wotton is OK with being called a good Samaritan, but not a hero — despite having spent a huge chunk of his career in the lifesaving business.
On a Sunday in mid-March, Wotton and his wife were out on a tandem-bike ride along State Road A1A headed south to Atlantic Dunes Park. When they turned around and headed back, they spotted a group of people huddled around an unconscious cyclist lying in the bike lane.
Somebody had called 911, but Wotton and his wife got off their bike and he helped stabilize the woman until the paramedics arrived and she was taken to the hospital.
Not taking any credit for his role in aiding the woman, Wotton, 55, says, “I was in the right place at the right time. It’s just what I do.”
Wotton, Delay Beach’s Ocean Rescue division chief since 2015, is responsible for water safety for the city. This means, for example, rescuing people caught in riptides or those who may have been tangled in the tentacles of a Portuguese man o’ war.
“It’s an occupation that found me,” says Wotton, who grew up swimming off the shores of Hollywood Beach and followed in his older brother’s footsteps to become a lifeguard.
He stays fit by running and by swimming five mornings in a master class at 5:45 and riding a tandem bike with his wife of 23 years, Elaine. Twice a year he must pass a qualification swim of 500 meters in under 10 minutes.
He loves surfing, swimming, rowing, boating, paddling and fishing — anything to do with water sports.
Wotton met his wife, who is from Manchester, England, in 1997, at a Jazz on the Avenue event on Atlantic Avenue.
The Delray Beach couple, who have two sons, one in the Coast Guard and one studying auto mechanics at PBSC, married the following year at sunset on a boat in Key West.
With their sons they traveled and did things outdoors, such as going to the Keys, camping at Long Key State Park and lobstering.
At one Christmas dinner with extended family, Wotton remembers being hailed as a hero for pulling out 23 lobsters for appetizers.
“Chief Wotton is a true beach safety professional,” says Delray Beach Fire Chief Keith Tomey. “I do not believe there is any other lifeguard as knowledgeable, as professional or as compassionate about the job as Chief Wotton.”
He worked to improve the service and reputation of the lifeguarding profession, relocating the division from the Parks and Recreation Department to public safety at the Fire Rescue Department.
“People don’t realize that 35 years ago lifeguards were regarded differently, and it wasn’t considered a career,” Wotton says. “The concept of lifeguarding or ocean rescue is now a respected profession which people take seriously and choose for their career.”
He strives to be a role model to his peers and his staff.
“I don’t ask anyone to do something I wouldn’t do myself,” he says. “I put the operation’s needs ahead of my own needs. That is one of the reasons I swim early in the morning before coming to work. I take care of my mental and physical health. Once at work, there are no guarantees on how the day will unfold.”
Wotton was a serious competitor in his younger years and won national lifesaving competitions.
Wotton and his friend Steve Griffith, 61, the Ocean Rescue lieutenant for Boca Raton, were rowing partners and competed as a team in races for lifeguards throughout the country and in run-swim-paddle-row endurance events.
In 2017, Griffith and Wotton took home the gold medal for their age group in the doubles row at the U.S. Lifesaving Association national championships at Daytona Beach.
At the same event, Wotton took the gold in his age group in the American Ironman competition and the silver medal in the surf-race-swim event.
“We were always the team to beat,” remembers Griffith.
Griffith also credits Wotton with improving their profession.
“As division chief, Phil has promoted professionalism and a higher-quality standard of care for all lifeguards. Now all lifeguards must be EMTs,” Griffith said. “He has raised the bar for the level of care for Delray Beach residents and others.
“Phil is a very passionate guy — passionate about his job, about his professionalism and physical performance on and off the job. He pushes himself to do the best he can for himself, his job and for his city.”
Wotton doesn’t plan to retire until he is at least 70, meaning he has many more years of doing what he loves.
“As long as I stay healthy and enjoy my job and the people I work with, I’ll be here,” he says.

NOMINATE SOMEONE TO BE A COASTAL STAR
Send a note to news@thecoastalstar.com
or call 561-337-1553.