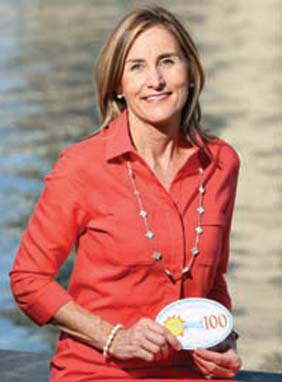 a big impact on local charities

Tandy Robinson has seen firsthand just how much of a driving force women in South Florida can be when they unite their efforts toward a common goal.

The co-founder of Impact 100 Palm Beach County, a group of women who have awarded close to $370,000 to a handful of nonprofits in two years, Robinson has helped to create an organization that truly is making an impact.

“There are women in this community who are doers and they’re powerful when they come together and make things happen,” she said.

A vice president for private wealth management at Goldman Sachs, Robinson was meeting with a client in Vero Beach in 2009 when she first heard of Impact 100, an organization founded in Cincinnati in 2001.

“We had gotten together for lunch to talk about community service and she told me about this idea,” Robinson said. “I just loved the whole concept. It’s one check for $1,000 and one meeting a year.”

The concept is built around simplicity. A group of women in a community join Impact 100, each contributing $1,000. Once a year, they award grants of $100,000 to organizations selected through a detailed process that culminates with a vote by members.

As she talked to her client at lunch that day several years ago, Robinson learned the Impact 100 idea was being successfully implemented in Vero Beach as well as several other cities across the country.

“I knew we had to bring it here,” she said, adding that she later contacted friends Cindy Krebsbach and Lisa Mulhall, who helped get Impact 100 PBC started and served as co-founders.

Robinson was so excited about the idea that she forgot to keep an eye on her speedometer as she was leaving the lunch meeting. A police officer, with ticket book in hand, was a bit more vigilant.

“I left there so jazzed up that I just put the pedal to the metal,” Robinson said. “The police officer said to me ‘Lady, slow down.’ ”

Slowing down, however, is not part of Robinson’s game plan.

After graduating from Emory University in Atlanta, Robinson returned to South Florida and she now lives in coastal Delray Beach with her husband, Joe, and their 6-year-old daughter, Gracie.

While her job assisting high-net-worth clients manage their wealth keeps her pretty busy, as does her current role as co-chairwoman of Impact 100 along with Sue Diener, Robinson also finds time to get involved other community organizations.

She’s been on the board at Saint Andrews School for eight years and next year will be joining the board of Gulf Stream School.

Helping Impact 100 continue to grow is also a priority. Next month, the organization will host “An Evening with Wendy Steele, Founder of Impact 100,” open to current and prospective Impact 100 members. Robinson also spreads the word about Impact 100 Palm Beach County by visiting several house parties hosted by existing members every year.

“The two things I enjoy most about Impact 100 are the education I get about the needs of the community and the fact that we can make such a significant difference,” she said. “I also cherish the friendships I’ve made through Impact 100.”

An Evening with Wendy Steele, founder of Impact 100