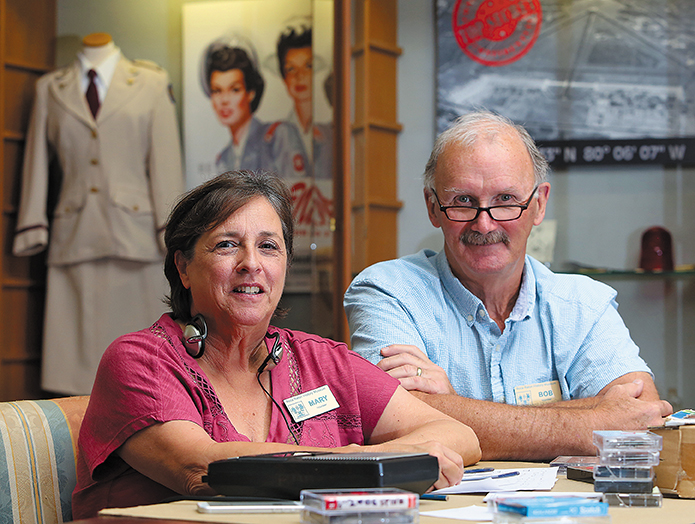 When most people glance at the Boca Raton Resort and Club, they see a luxury hotel that has hosted celebrities, world leaders and high-powered business executives.
When Bob and Mary Isenbek look at the Boca Raton Resort and Club, they see history come alive.
“We see what it was, not what it is,” says Bob, who along with Mary has been volunteering at the Boca Raton Historical Society and Museum since shortly after arriving in South Florida in 2012. “You start to look at things differently.”
History lovers from back in their days living in New York, when they would visit museums and historical cemeteries, the Isenbeks have immersed themselves in the history of Boca Raton through their volunteer work at the museum.
They can tell you about early Boca Raton pioneer Frank Chesebro, whose diary they helped transcribe, and they can rattle off the names of the owners of the landmark Boca Raton resort as if they knew each one personally.
“I even know why it’s pink,” Bob says. Pink was the favorite color of Hildegarde Schine, whose husband, J. Myer Schine, owned the hotel between 1944 and 1955. It was painted pink in about 1950. Since walking through the door of the historical society six years ago — arriving as visitors and leaving as volunteers — the Isenbeks have taken on a variety of tasks, mostly working with museum Curator Susan Gillis.
“We refer to Mary and Bob as the ‘A-team’ around the museum,” Gillis said. “They assist with cataloguing our collections, help build exhibits, staff major events, tote and fetch donations and supplies, and decorate for the holidays. My department couldn’t function without them.”
The Isenbeks have gained an understanding of Boca Raton’s history that draws them closer to the community they now call home.
“Even though they are New Yorkers, they now know more about Boca Raton history than many of the old-timers,” Gillis says.
Mary Isenbek says that through history, their connection with Boca Raton has gotten stronger and she encourages others who migrate to become absorbed in their communities.
“It connects you to the present,” she said.
Mary, 68, and Bob, 70, have been married for 46 years and are residents of San Remo Club, along State Road A1A. Their connection with the historical society came in handy when the community decided to celebrate its 50th anniversary last year. The couple, working with the museum’s collections, researched the history of Boca’s San Remo and found photos that were taken when it was being built, as well as other photos from over the years.
They put together four large storyboards detailing the history of their community, which were placed on display in San Remo.
In addition to working in collections at least every Tuesday — where they have spent time cataloging photos from the Boca Raton News and identifying those in the images, along with working on other projects — the Isenbeks volunteer at the Boca Express Train Museum, also operated by the historical society.
Bob serves as the station manager, greeting adult visitors to the two 1947 Seaboard Air Line streamlined rail cars, while Mary works with children coming for tours.
In addition, Mary makes jewelry — often from shells she collects on the beach — and sells them in the museum gift shop, with the proceeds going to the organization.
For the Isenbeks, working with Gillis and uncovering some of the mysteries of Boca Raton’s history has become more than just a way to satisfy curiosity. It has become an important part of their lives.
“I like that we’re always learning something,” Mary says. “That’s what keeps us young.”
Says Bob: “History is an addiction. Once you’re hooked on it, that’s it.”